A follow-up to The Commitments finds a middle-aged Jimmy battling cancer and reconnecting with his musical past by tracking down the resurrected albums of old bands, practicing the trumpet, reuniting with his long-lost brother and rediscovering the joys of fatherhood.

NPR stories about The Guts 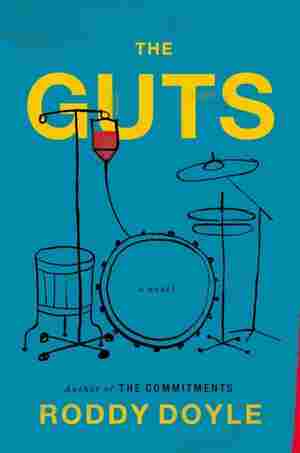 January 26, 2014 • Roddy Doyle's new The Guts revisits the Commitments three decades later, grown up and dealing with life's blows. Mastermind Jimmy Rabbitte is out of the hospital after cancer surgery, and he's living life one day at a time. Critic Alan Cheuse says the dialogue-heavy novel is both foulmouthed and bursting with joie de vivre. 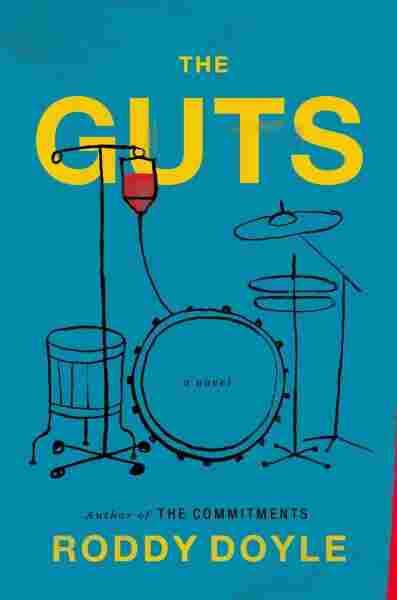 The parcel was on the table in the kitchen.

It was propped there, against the ketchup. Facing the door, so he'd see it. Brown cardboard, from Amazon.

Aoife was at the counter, chopping something. He picked up the package.

— A puppy, said Aoife. He pulled back the flap.

She smiled. He was imitating the boys. And he was Jimmy again, not the jittery lump she'd seen leaving the house earlier. He pulled off the ribbon and tore at the blue wrapping paper.

He looked at the yellow cover, and laughed.

— Fuckin' great. He was delighted. And so was she.

He held her with one arm and held the book over her head. He read the blurb at the top of the cover.

— Understand cancer treatment options, get a handle on the side effects, and feel better.

He lowered the book.

— Fuckin' hell. I feel better already. He kissed her.

He flicked quickly through the book — lots of lists and pictures.

— It was supposed to be a joke.

It was Mahalia. She'd stopped at the door.

— The flirting, said Mahalia. — It's disgusting. At your age, like.

She passed him, on her way to the fridge.

— You should be happy I'm not, like, anorexic, said Mahalia.

— We are, said Jimmy. — Very happy. Although now, the way things are goin' in this country, some anorexic kids wouldn't be such a bad idea.

She lifted her hands and did the quotation marks thing with her index fingers.

She dropped her hands.

— economic decline during which trade and industrial activity are, like, reduced.

They stared at her as she shut the door of the fridge.

— The sound of silent laughter, said Mahalia, as she went past him, out.

— Where did she come from?

Jimmy found a good picture in the book. He read the caption.

— A healthy, protein-rich breakfast starts the day off right.

— Can't argue with that.

— Looks like an omelette, said Jimmy. — The picture's a bit grainy. Tomatoes, mushrooms.

He read a heading — the book was full of them.

— Jesus, said Aoife. — It never occurred to me that you'd read the fucking thing.

Jimmy had brought the book up to the bed.

— Hardly me best feature, said Jimmy. — Let's keep it real, love. She loved what he'd said but it couldn't stop the tears. He joined her; he couldn't help it. It had become the nightly event — nearly every night. They often chatted as they cried, as if they were just chopping onions.

— Will the kids accept me without hair? Jimmy asked.

— I know, said Jimmy. — It's still there but. And it started — we call it receding in the trade. Another fuckin' recession.

— There's a little patch at the back.

She put her hand on the back of his head.

— Shave it off, said Aoife.

— Your head's a lovely shape.

— They can see me bald and healthy.

She heard his feet. He was back.

He was holding a towel, one of the good white ones, to the side of his head.

He climbed into the bed. With no groans at all. She could tell: he was excited, worked up.

— I cut the side o' me fuckin' head, he told her. He was grinning and grimacing.

— Take it out of the way there.

She held the hand that was holding the towel and made him lift it away from his head, behind his ear.

— Why did you start there? she asked.

She took the towel from him and flapped it open. She pointed at the speck.

— I'll get it cut short tomorrow, he said. — A three blade or somethin'.

She hadn't a clue what that meant. There'd never been short hair in the house. The boys had disappeared behind their hair years ago. They came out to eat.

— Then I'll finish the job at home, said Jimmy.

She didn't ask him why he wouldn't just let the barber shave his head, and avoid the blood and drama. The book, the decision to go bald — she hadn't seen him so lively and happy in weeks.

From The Guts by Roddy Doyle. Reprinted by arrangement with Viking, a member of Penguin Group (USA) LLC, A Penguin Random House Company. Copyright Roddy Doyle, 2013.