Title
An Officer and a Spy
Author
Robert Harris

A tale inspired by the infamous Dreyfus Affair finds recently promoted head of Paris's late-19th-century counterespionage agency Georges Picquart leading the effort to convict Dreyfus only to succumb to gradual doubts that a high-level spy remains at large in the military.

NPR stories about An Officer and a Spy 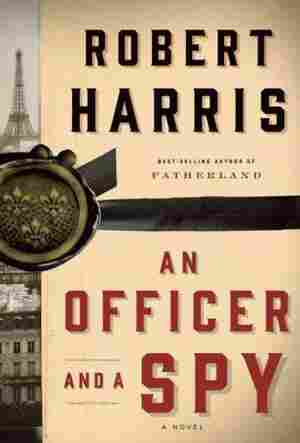 January 30, 2014 • Robert Harris' new An Officer and a Spy is a fictionalized account of the Dreyfus Affair — which, as critic Alan Cheuse notes, is tailor made for Harris' talents: there's an innocent victim at the center, a melodramatic villain, buffoonish military brass, crusading newspaper editors and a star turn from the novelist Emile Zola.

Excerpt: 'An Officer And A Spy'

"Major Picquart to see the Minister of War ... "

The sentry on the rue Saint-Dominique steps out of his box to open the gate and I run through a whirl of snow across the windy courtyard into the warm lobby of the hôtel de Brienne, where a sleek young captain of the Republican Guard rises to salute me. I repeat, with greater urgency: "Major Picquart to see the Minister of War ... !"

We march in step, the captain leading, over the black-and-white marble of the minister's official residence, up the curving staircase, past suits of silver armour from the time of Louis the Sun King, past that atrocious piece of Imperial kitsch, David's Napoleon Crossing the Alps at the Col du Grand-Saint-Bernard, until we reach the first floor, where we halt beside a window overlooking the grounds and the captain goes off to announce my arrival, leaving me alone for a few moments to contemplate something rare and beautiful: a garden made silent by snow in the centre of a city on a winter's morning. Even the yellow electric lights in the War Ministry, shimmering through the gauzy trees, have a quality of magic.

"General Mercier is waiting for you, Major."

The minister's office is huge and ornately panelled in duck-egg blue, with a double balcony over the whitened lawn. Two elderly men in black uniforms, the most senior officers in the Ministry of War, stand warming the backs of their legs against the open fire. One is General Raoul le Mouton de Boisdeffre, Chief of the General Staff, expert in all things Russian, architect of our burgeoning alliance with the new tsar, who has spent so much time with the Imperial court he has begun to look like a stiff-whiskered Russian count. The other, slightly older at sixty, is his superior: the Minister of War himself, General Auguste Mercier.

I march to the middle of the carpet and salute.

Mercier has an oddly creased and immobile face, like a leather mask. Occasionally I have the odd illusion that another man is watching me through its narrow eye-slits. He says in his quiet voice, "Well, Major Picquart, that didn't take long. What time did it finish?"

"Half an hour ago, General."

"So it really is all over?"

And so it begins.

"Come and sit down by the fire," orders the minister. He speaks very quietly, as he always does. He indicates a gilt chair. "Pull it up. Take off your coat. Tell us everything that happened."

He sits poised in expectation on the edge of his seat: his body bent forwards, his hands clasped, his forearms resting on his knees. Protocol has prevented him from attending the morning's spectacle in person. He is in the position of an impresario who has missed his own show. He hungers for details: insights, observations, colour.

"What was the mood on the streets first thing?"

I describe how I left my apartment in the predawn darkness to walk to the École Militaire, and how the streets, to begin with at least, were unusually quiet, it being a Saturday — "The Jewish Sabbath," Mercier interrupts me, with a faint smile — and also freezing cold. In fact, although I do not mention this, as I passed along the gloomy pavements of the rue Boissière and the avenue du Trocadéro, I began to wonder if the minister's great production might turn out to be a flop. But then I reached the pont de l'Alma and saw the shadowy crowd pouring across the dark waters of the Seine, and that was when I realised what Mercier must have known all along: that the human impulse to watch another's humiliation will always prove sufficient insulation against even the bitterest cold.

I joined the multitude as they streamed southwards, over the river and down the avenue Bosquet — such a density of humanity that they spilled off the wooden pavements and into the street. They reminded me of a racecourse crowd — there was the same sense of shared anticipation, of the common pursuit of a classless pleasure. Newspaper vendors threaded back and forth selling the morning's editions. An aroma of roasting chestnuts rose from the braziers on the roadside.

At the bottom of the avenue I broke away and crossed over to the École Militaire, where until a year before I had served as professor of topography. The crowd streamed on past me towards the official assembly point in the place de Fontenoy. It was beginning to get light. The École rang with the sound of drums and bugles, hooves and curses, shouted orders, the tramp of boots. Each of the nine infantry regiments quartered in Paris had been ordered to send two companies to witness the ceremony, one composed of experienced men, the other of new recruits whose moral fibre, Mercier felt, would benefit by this example. As I passed through the grand salons and entered the cour Morland, they were already mustering in their thousands on the frozen mud.

I have never attended a public execution, have never tasted that particular atmosphere, but I imagine it must feel something like the École did that morning. The vastness of the cour Morland provided an appropriate stage for a grand spectacle. In the distance, beyond the railings, in the semicircle of the place de Fontenoy, a great murmuring sea of pink faces stirred behind a line of black-uniformed gendarmes. Every centimetre of space was filled. People were standing on benches and on the tops of carriages and omnibuses; they were sitting in the branches of the trees; one man had even managed to scale the pinnacle of the 1870 war memorial.