Title
The Pope and Mussolini
Subtitle
The Secret History of Pius XI and the Rise of Fascism in Europe
Author
David I. Kertzer

Analyzes the relationship between Pius XI and the notorious Italian dictator, tracing how after coming into power in the same year they forged covert ties to one another to consolidate power and pursue political goals.

NPR stories about The Pope and Mussolini 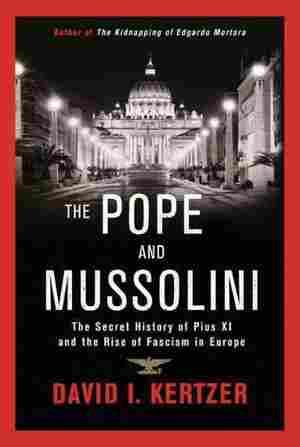 January 27, 2014 • It's commonly thought that the Catholic Church fought heroically against the fascists in Italy. But in The Pope and Mussolini, historian David Kertzer says the church actually lent organizational strength and moral legitimacy to Mussolini's regime.

Excerpt: The Pope And Mussolini

Ailing, elderly, and having barely survived circulatory failure the previous year, Pope Pius XI begged God to grant him a few more days. He sat at his desk in his third-floor Vatican office in his white robe, a cane resting against the wall nearby. The rusted compass and barometer from his climbs to Italy's highest Alpine peaks lay on one side, a reminder of days long past. An old tuning fork remained in a drawer. It had been years since he had last taken it out. Proud of his singing voice and eager that his sense of pitch not desert him, he had practiced when he could, but only when he was sure no one was listening. Now, knowing the end was near, he went through each drawer, making sure his papers were in order.

For years the pope had enjoyed good health, and observers had marveled at his punishing schedule. He had insisted on knowing every detail of Vatican affairs and deciding everything of any significance. Now every day was a challenge, every step caused pain. At night, unable to sleep, he lay awake, his legs throbbing from varicose veins, his asthma making breathing a struggle, and worst of all, plagued by the feeling that something had gone terribly wrong.

In the daytime, light streamed into his office through the three windows that overlooked St. Peter's Square. But now it was night, and his small desk lamp cast a yellow glow over the sheets in front of him. The Lord, he thought, had kept him alive for a reason. He was God's vicar on earth. He could not die before saying what had to be said.

The pope had summoned all of Italy's bishops to Rome to hear his final message. The gathering was to be held in a week and a half in St. Peter's Basilica, on February 11, 1939. It would mark the tenth anniversary of the Lateran Accords, the historic agreement that Pius XI had struck with Italy's dictator, Mussolini, ending decades of hostility between Italy and the Roman Catholic Church. With that agreement, the separation of church and state that had marked modern Italy from its founding sixty-eight years earlier came to an end. A new era began, the Church a willing partner of Mussolini's Fascist government.

Seventeen years earlier, in 1922, Achille Ratti, freshly appointed cardinal, had been the surprising choice to succeed Pope Benedict XV. He took the name Pius XI. Later that same year, amid widespread violence, Benito Mussolini, the thirty-nine-year-old Fascist leader, became Italy's prime minister. Since then the two men had come to depend on each other. The dictator relied on the pope to ensure Catholic support for his regime, providing much-needed moral legitimacy. The pope counted on Mussolini to help him restore the Church's power in Italy. Now, with pen in hand, thinking back over these years, Pius felt a deep regret. He had allowed himself to be led astray. Mussolini seemed to think he was a god himself, and he had embraced Hitler, a man the pope despised for undermining the Church in Germany and championing a pagan religion of his own. The painful scene Rome had witnessed the previous spring haunted him: a sea of red and black Nazi flags had blanketed the city, as the German Führer passed through its historic streets in triumphal procession.

Two months after Hitler's visit, Mussolini shocked the world by proclaiming that Italians were a pure, superior race. Although Jews had lived in Rome since before the time of Jesus, they were now officially deemed a noxious foreign people. The pope was horrified. Why, he asked in a public audience, was Italy's leader so eager to imitate the Führer? The question enraged Mussolini, for nothing upset him more than being called Hitler's stooge. The men of the pope's inner circle rushed to repair the damage. More comfortable with authoritarian regimes than with democracies, and fearful of losing the many privileges that Mussolini had granted the Church, they thought the pope was getting reckless in his old age. He had already alienated the Nazi leaders; now, they worried, he was putting the Vatican's ties to Mussolini's Fascist regime at risk.

At his headquarters on the other side of Rome's Tiber River, Mussolini raged against the pope. If Italians still went to mass, it was only because he had told them to. If it weren't for him, anticlerics would be running wild through Italy's streets, sacking churches and forcing castor oil down the throats of cowering priests. If every classroom and courtroom had a crucifix on its wall, if priests taught religion in all of Italy's public schools, it was because Mussolini had ordered it. If generous state funds were being used to support the Church, it was because he had willed it, all in an effort to craft a mutually beneficial understanding between his Fascist government and the Vatican.

Pius stayed up late on the night of January 31, as he had the previous night, drafting his remarks for the gathering of bishops. The once-hearty, barrel-chested "mountaineer" pope was emaciated, his formerly full face deeply wrinkled and shrunken. But it was clear to all who saw him how determined he was to give that speech. He did not want to die before warning the bishops that Fascist spies were everywhere, including the halls of the Church. It would be his last chance to denounce Mussolini's embrace of Nazi racism.

In the week remaining before the speech, however, the pope's remaining reserve of strength began to fail him. Unable to stand, he took to bed. Cardinal Eugenio Pacelli, who as secretary of state was second-in-command at the Vatican, begged him to postpone the gathering. The pope would not hear of it and ordered the Vatican daily newspaper to report that he was in good health. On February 8, worried that he might not be strong enough to give the speech in three days' time, he ordered the Vatican printing office to make a copy of it for each bishop. The following night his condition worsened, and in the early morning hours of February 10, his breathing became more labored. Attendants, careful not to disturb the white skullcap on his head, fastened an oxygen mask over his mouth. At four a.m. they roused Cardinal Pacelli. The cardinal rushed to the pope's bedside, then fell to his knees to pray. His eyes reddened with tears.

Lying on his simple iron bed, rapidly fading, Pius XI soon took his last feeble breath. God had not granted his final request. The bishops would see him next not in St. Peter's Basilica but in the nearby Sistine Chapel where, on the afternoon of February 10, his ruined body was placed on a raised platform. To those who had known him in his prime, he was barely recognizable. It was as if someone else lay there, under Michelangelo's frescoed ceiling, wearing the pope's white silk cassock and red-ermine-lined cap.

Across the Tiber, Mussolini greeted news of the pope's death with a grunt of relief, eager that the papal wake not interfere with his next coupling with Clara Petacci, his green-eyed young mistress. But one last concern remained. Over the years, he had put in place an extensive network of spies in the Vatican and read their reports eagerly. In recent days, they had warned him that the pope planned to give an inflammatory anniversary speech denouncing Mussolini's anti-Semitic campaign and his ever-tightening ties to the German Führer. If the text got out now, he worried, it might yet do damage, a prophetic papal plea from the grave.

There was one man, thought the dictator, in a position to help. He contacted Cardinal Pacelli, who in his role as chamberlain was now in charge of everything Pius had left behind, including the handwritten pages piled on his desk and the stacks of freshly printed booklets ready for distribution to the bishops. Mussolini wanted all copies of the speech destroyed.

He had reason to think that Pacelli would oblige him. Hailing from a prominent Roman family closely linked to popes for generations, Pacelli had for the last months lived in fear that the pope would antagonize Mussolini. Too much, he thought, was at stake. Yes, he owed a great deal to the pope who had made him secretary of state and had promoted him in so many ways. But he felt he had an even greater responsibility to protect the Church. He ordered the pope's desk cleared, the printed copies of his speech seized.

Three weeks later a large crowd waited impatiently in St. Peter's Square as the cardinals met in conclave. At the appearance of the tell-tale ribbon of white smoke wafting from the Apostolic Palace, a cheer went up. "Habemus papam," announced the cardinal deacon from the balcony perched above the main entrance of St. Peter's. Soon a tall, thin, bespectacled figure, newly clothed in white papal robe and bejeweled tiara, strode out to give his blessing. Eugenio Pacelli would take the name Pius XII, honoring the man at whose bedside he had recently wept.