The Women Who Raised Our Nation

'Founding Mothers: The Women Who Raised Our Nation'

April 14, 2004 • Conjuring images of America's founding fathers — Washington, Adams, Franklin — is easy. But less is known about the women who helped build a new nation. In a new book, Founding Mothers, NPR News Analyst Cokie Roberts examines the lives and contributions of Revolutionary wives and lesser-known women of the era. Roberts speaks with NPR's Renee Montagne.

'Founding Mothers: The Women Who Raised Our Nation' 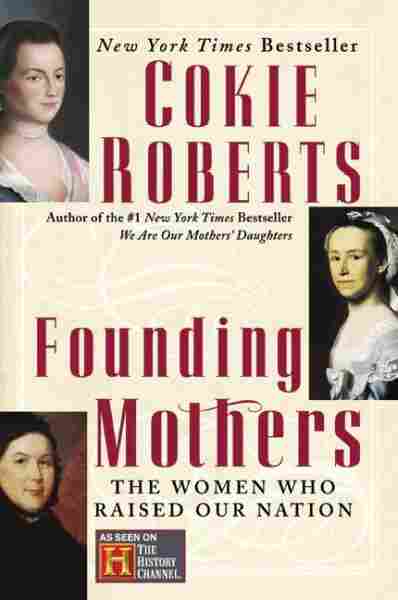 The Women Who Raised Our Nation

Before 1775:
The Road to Revolution

When you hear of a family with two brothers who fought heroicallyin the Revolutionary War, served their state in high office, and emerged as key figures in the new American nation,don't you immediately think, "They must have had a remarkablemother"? And so Charles Cotesworth Pinckney and Thomas Pinckney did. Today Eliza Lucas Pinckney would be the subject of talkshow gabfests and made-for-TV movies, a child prodigy turned into a celebrity. In the eighteenth century she was seen as just a considerate young woman performing her duty, with maybe a bit too much brainpowerfor her own good.

George Lucas brought his English wife and daughters to South Carolina in 1734 to claim three plantations left to him by his father.Before long, however, Lucas left for Antigua to rejoin his regiment infighting the war against Spain, leaving his sixteen-year-old daughterin charge of all the properties, plus her ailing mother and toddler sister.(The Lucas sons were at school in England.) Can you imagine asixteen-year-old girl today being handed those responsibilities? ElizaLucas willingly took them on. Because she reported to her father onher management decisions and developed the habit of copying herletters, Eliza's writings are some of the few from colonial women thathave survived.

The South Carolina Low Country, where Eliza was left to fend forthe family, was known for its abundance of rice and mosquitoes. Ricesupported the plantation owners and their hundreds of slaves; mosquitoessent the owners into Charleston (then Charles Town) for summermonths of social activities. Though Wappoo Plantation, the Lucashome, was only six miles from the city by water, seventeen by land,Eliza was far too busy, and far too interested in her agricultural experiments,to enjoy the luxuries of the city during the planting months.

The decision about where to live was entirely hers (again, canyou imagine leaving that kind of decision to a sixteen-year-old?), asEliza wrote to a friend in England in 1740: "My Papa and Mama'sgreat indulgence to me leaves it to me to choose our place of residenceeither in town or country." She went on to describe her arduouslife: "I have the business of three plantations to transact, whichrequires much writing and more business and fatigue of other sortsthan you can imagine. But least you should imagine it too burdensometo a girl at my early time of life, give me leave to answer you: Iassure you I think myself happy that I can be useful to so good a father,and by rising very early I find I can go through much business."And she did. Not only did she oversee the planting and harvesting ofthe crops on the plantations, but she also taught her sister and someof the slave children, pursued her own intellectual education inFrench and English, and even took to lawyering to help poor neighbors.Eliza seemed to know that her legal activities were a bit overthe line, as she told a friend: "If you will not laugh immoderately at me I'll trust you with a secret. I have made two wills already." Shethen defended herself, explaining that she'd studied carefully whatwas required in will making, adding: "After all what can I do if a poorcreature lies a dying and their family taken it into their head that Ican serve them. I can't refuse; but when they are well and able toemploy a lawyer, I always shall." The teenager had clearly madequite an impression in the Low Country.

The Lucases were land-rich but cash-poor, so Eliza's fatherscouted out some wealthy prospects as husband material for his delightfuldaughter. The young woman was having none of it. Her father'sattempts to marry her off to a man who could help pay themortgage were completely and charmingly rebuffed in a letter writtenwhen she was eighteen. "As you propose Mr. L. to me, I am sorryI can't have sentiments favorable enough of him to take time to thinkon the subject ... and beg leave to say to you that the riches of Peruand Chile if he had them put together could not purchase a sufficientesteem for him to make him my husband." So much for her father'splan to bring some money into the family. She then dismissed anothersuggestion for a mate: "I have so slight a knowledge of him Ican form no judgment of him." Eliza insisted that "a single life is myonly choice ... as I am yet but eighteen." Of course, many womenher age were married, and few would have brushed off their fathers soemphatically, but the feisty Miss Lucas was, despite the workload, having too much fun to settle down with some rich old coot.

Eliza loved "the vegetable world," as she put it, and experimentedwith different kinds of crops, always with a mind towardcommerce. She was keenly aware that the only cash crop South Carolinaexported to England was rice, and she was determined to findsomething else to bring currency into the colony and to make theplantations profitable. When she was nineteen, she wrote that shehad planted a large fig orchard "with design to dry and export them."She was always on the lookout for something that would grow well inthe southern soil. Reading her Virgil,she was happily surprised tofind herself "instructed in agriculture ... for I am persuaded thoughhe wrote in and for Italy, it will in many instances suit Carolina."

By her own account, Eliza was always cooking up schemes. Shewrote to her friend Mary Bartlett: "I am making a large plantation ofoaks which I look upon as my own property, whether my father givesme the land or not."Continues...