Decoding a Century of Provocative Perfume

Barbara Herman looks at the bold, sexy and downright odd smells that have defined women over the decades. 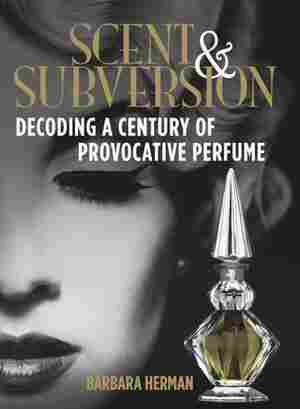 February 6, 2014 • In Scent And Subversion, Barbara Herman explains how, at the turn of the 20th century, most perfumes were still just one note, floral. Then along came a fragrance that changed everything. "With Chanel No. 5," Herman says, "Coco Chanel said, 'A woman needs to smell like a woman, and not a rose.'"

Take a Whiff on the Wild Side

It was few years ago when I was the editor of a women's pop-culture website that I started writing about perfume on my blog, Yesterday's Perfume...Trying to be discreet in the middle of an open office, I'd pop open a tiny one-milliliter vial of the decanted perfume du jour and dab it on my wrist with its plastic wand. Then, in a ritual that has become as common as having a meal or reading a book, I'd lift my wrist to my nose, close my eyes, and sniff, like a deranged junky getting her fix.

In that work environment, it would have been appropriate for me to wear perfume in a style that has been popular since the 1990s: the office scent. Usually with citrus notes or oceanic accords that stay close to the skin — notes that project little more than "clean..."

As I became bored with office life, my rebellion took an invisible — but odoriferous — turn...My perfume tastes began to wander over to the wrong side of the tracks, looking for the rude, the louche, and the difficult...

There were so many first loves in my honeymoon period with perfume.

Take Robert Piguet's 1944 perfume for women, Bandit. Its composer, Germaine Cellier — former model, reputed lesbian, and legendary iconoclast of scent — was the rare female perfumer, celebrated for her daring overdoses of extreme perfume notes. Her masterpiece Bandit, a bitter green leather perfume for women, was said to have been inspired by the scent of female models changing their undergarments backstage during fashions shows...Bandit was introduced to the public during a Robert Piguet fashion show, with models dressed as pirates brandishing weapons while one model smashed a bottle of Bandit on the runway, turning her heels as this bitter, gorgeous, butch perfume filled the air.

Chanel No. 19 (1971) was gentler in its seductions. Rather than slap me with a new and shocking scent, it lulled me into an opiate-like dream state...Chanel No. 19 unfolded before me, projecting visions of a dim, damp forest, with smells of wet earth, vegetal freshness and even the occasional sunbeam intensifying the outlines of inchoate smells...

Christian Dior's 1972 perfume Diorella, with its disquieting, overripe melon note reminded me — just momentarily — of an overheated dumpster during a New York City summer, with its sweet, sweaty smell of flowers, fruit rinds, and meat scraps mingling in their first, fetid blush of decay...

Not all of the subversive scents that took me to the Wild Side were vintage. Some were contemporary perfumes whose composers pushed their creations into more daring olfactory and cultural directions than the prevailing cult of clean perfumes. Serge Lutens' Muscs Koublai Khan... smelled like wet fur, unwashed hair and bodies, combined with the faintest, softest hint of something sweet and powdery, like wild honey and pollen....

Sècrètions Magnifique starts off innocuously enough, with a soft, floral note. Things get weird very quickly, however, as the blood, adrenaline and semen accords — shocking biological accords never before used in perfume — arrive like an assault to the senses...

Civet. Musk. Rotten fruit. Women's underpants. Dirty ashtrays. Blood. Most people would not think this catalog of smells should have any place in a positive discussion of perfume, but all of these scents and more became metaphors for everything my modern, sterile office lacked. In the virtual, deodorized, homogenized and antiseptic world I felt I was dissolving into, these Things That Stink felt alive...

The popularity of certain smells is cyclical, like hemlines and silhouettes in fashion. The 19th century's popular "soliflore" — or single-note floral scent — was replaced by a new "abstract" perfume style. These abstract perfumes that didn't attempt to mimic nature were made possible thanks to newly available synthetic perfume ingredients. Dirty, erotic animal notes that were popular in the mid-nineteenth century came back in the early part of the twentieth century and stuck around until even the 1980s, only to give way to the so-called "clean" fragrances of the 1990s. In the virtual Internet Age, perfume became disembodied, and the "baseness" of these base notes was repressed.

These cycles of taste mirror the arbitrary and ever shifting role of gender in perfume — the idea that certain scents are either masculine or feminine. If men wore violet perfumes in the nineteenth century and women wore tobacco and leather perfumes in the 1930s — styles whose "gender" has since been reversed — this seems like more proof in perfume form that gender, like perfume, is fluid, culturally constructed, and wearable in multiple forms on variable bodies. (804)

...Kaleidescopically complex, Diorella starts off citrus fresh, and quickly moves to a body odor-tinged (cumin-like) floral accord with honeysuckle and jasmine. The musky base adds weight to its sparkling top notes, never wearing Diorella down but rather giving it a little depth and darkness. Like Suzanne from Leonard Cohen's song, Diorella "shows you where to look/amid the garbage and the flowers," through its olfactory juxtaposition of ripe smells and floral notes. Diorella smells — and this is actually an endorsement — like not-yet-going-bad garbage that someone has thrown a pile of flowers onto.

I smelled a touch of Durian fruit in the sweet/rotten undertones of Diorella, or maybe more accurately, jackfruit, which could be an aspect of its melon note.

Honestly, does anyone do "funk" as well as Roudnitska? It's as if he's reminding us that these ripe smells connote death as much as they do life. It's profound, really, this reminder in his perfumes — that it's the mortality of these bright and alive things that makes them beautiful...(167)

...In the late 1970s, Gale and Fred Hayman decided they needed an exclusive fragrance for their clothing boutique on Rodeo Drive. This exclusive fragrance...ended up scenting every magazine, mall, big-haired salad eater, and Gucci bag-carrying Texas debutante in the Eighties like the "airborne toxic event" that threatens the characters in Don DeLillo's surreal fantasia on consumerism and suburbia in White Noise...

Giorgio set the volume way up (hence all the references to "loud" scents), and other scents followed suit...It actually makes sense that by the Nineties, our exhausted noses were proffered androgynous office scents that had wiped off all their fuschia lipstick and purple eye shadow and retired their sequined evening gowns. Improbably, Giorgio is still available, but to me, it smells as dated as Robin Leach's sign-off sounds: "Champagne Wishes and Caviar Dreams!" (134)