This revealing chronicle of the iconic American writer's formative years evaluates the decade between his graduation from Harvard and his departure for Walden Pond, describing the influences that rendered him an advocate for non-violent activism and environmentalism.

NPR stories about The Adventures of Henry Thoreau 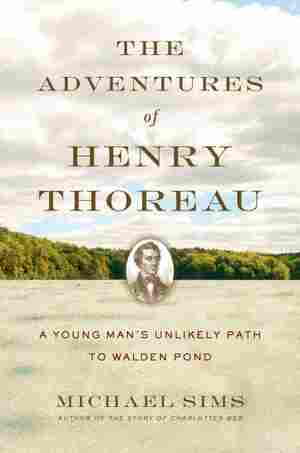 February 17, 2014 • A new biography reveals that young Thoreau took quite a few detours on his path to Walden. A gossipy young man who loved eating popcorn, ice skating and listening to his music box, schoolmates and neighbors found him standoffish and regarded his fascination with plants and Indian relics as downright odd.

Excerpt: The Adventures of Henry Thoreau

DANCING ON THE ICE

When I found a young Henry Thoreau ice-skating through the correspondence of Sophia Peabody Hawthorne, it was like running into a long-lost friend. In the decades since first encountering Walden in my late teens, I had often glimpsed Thoreau as the bearded sage of literature, natural history, or civil liberties. Except in his own writings, however, I had seldom met the awkward young man who loved to sing, who ran a private school and applied his engineering skills to the pencil business, who popped popcorn and performed magic tricks for Ralph Waldo Emerson's children, faced his own illnesses and the deaths of loved ones, and tried to make it as a freelance writer in New York City.

Sophia Hawthorne described a lively afternoon in Concord in December 1842 that captured my imagination: a twenty-five-year-old Thoreau skating on the Concord River with both Emerson and Sophia's own newlywed husband, Nathaniel Hawthorne. Emerson skated earnestly and Hawthorne grandly. Thoreau cavorted in what Sophia soon described to a friend as "dithyrambic dances and Bacchic leaps." In ancient Greece a dithyramb was a wild choral hymn and dance, especially one dedicated to Bacchus. Thoreau didn't drink alcohol, but otherwise Sophia Hawthorne found the perfect term for his response to being outdoors, which was indeed ecstatic and pagan.

Thoreau was not an ivory-tower thinker sitting with chin in hand. Contrary to myth, he was not a hermit. Caught up with his friends and his era, he lived most of his life in a busy village and admitted that he considered "homeopathic doses" of local gossip "as refreshing in its way as the rustle of leaves and the peeping of frogs." He spent relatively little time in the wilderness — a few weeks here and there. His Walden Pond cabin provided a solitary working space away from his family's boardinghouse, not escape from all society.

Over the years, I found that some books about Thoreau sharpened rather than assuaged my hunger for more about the real-life young man. As I began writing my own book about him, I realized that I didn't want to admire the marble bust of an icon. I wanted to gambol with a sarcastic radical who could translate Pindar and Goethe, track a fox to its lair, and host an abolitionist rally beside a tiny cabin he had built himself. I didn't want to applaud Thoreau. I wanted to find Henry.

We all have our own Thoreau. I met mine in high school, where he told me that we are rich in proportion to how much we can do without, that the cost of something is how much of our brief time on earth must be exchanged for it. I had no trouble fitting a mental image of Thoreau's 1840s Massachusetts over my 1970s Tennessee and his famous Concord lake over my modest woodland pond. "Aim above morality," this mentor advised, pulling the rug out from under both my fundamentalist upbringing and years of school indoctrination. What I loved most, however, were his observations about nature. His was a new kind of voice in the mid-nineteenth century: a strong mind classically trained, a poetic sensibility steeped in literature and allusion, but also an outdoorsman's viewpoint informed by a growing passion for how nature actually works. His studies were anchored by personal experience — decades of watching passenger pigeons and woodchucks, carrying botanical specimens in his hat, and observing spawning fish until he could gently lower his hand into the water and lift one out.

Other people have a different Thoreau, just as we have different Malcolm Xs, Oscar Wildes, and Virginia Woolfs. "Today Thoreau's words are quoted with feeling," wrote Thoreau aficionado Ken Kifer, "by liberals, socialists, anarchists, libertarians, and conservatives alike." His worldwide reputation as a philosopher and political activist can be traced to several lectures and essays, especially those following his now-famous night in jail — topics that appear later in this book and in its coda. Both Mohandas K. Gandhi and Martin Luther King credited Thoreau with inspiring their nonviolent campaigns. Edward O. Wilson called Thoreau "the father of environmentalism" and insisted that "he also deserves iconic status in the scientific fields of ecology and biodiversity studies." Fifteen years after Thoreau died in 1862, Emerson told a friend, "Thoreau was a superior genius ... A man of large reading, of quick perception, of great practical courage and ability, — who grew greater every day, and, had his short life been prolonged would have found few equals to the power and wealth of his mind."

The Adventures of Henry Thoreau begins in his childhood and ends in his late twenties. To resurrect this odd young man's everyday life, I turned to his nineteenth-century contemporaries. Thanks largely to the support of fellow Concord villager Ralph Waldo Emerson, Thoreau spent his adulthood surrounded by many of the great writers of the period we now call the American Renaissance. Several neighbors wrote memoirs or biographies of him, such as Emerson, Ellery Channing, and Franklin Sanborn. Others observed Thoreau closely in journals and correspondence, including all of these plus Nathaniel and Sophia Hawthorne, Lidian Emerson, Bronson Alcott, and Margaret Fuller.

I found many other rich primary sources. Only hours after some incidents took place in the school run by Thoreau and his brother, for example, the students involved described them in diaries or in letters to their parents. After Thoreau became famous for his own writings, some former students penned sketches of him, filled with vivid anecdotes, as did a few of his fellow Harvard undergraduates. Many other Concordians documented everyday life in this tumultuous era. Through them I was able to conjure many surprising details — the prevalence of drunkenness in the town, for example, or the look and feel of a Sunday morning at the Unitarian church.

All dialogue, all thoughts and observations attributed to any character, derive from written records by participants, as you can see from the endnotes. I employ terms that Thoreau used in his own writing, such as Man for humanity, Negro for African American, and Indian for Native American. For many proper nouns I followed nineteenth-century spelling, such as Ktaadn for the mountain now spelled Katahdin.

Every historical or biographical narrative slants toward those topics and characters that most intrigue the author, shaped by which incidents are included and which omitted. I'm more interested in Thoreau's imaginative response to nature, for example, than in his role as social critic and moral gadfly, and consequently much of this book takes place outdoors. It also begins before he put away his rifle. Thoreau started in his boyhood as a hunter and later occasionally shot birds for sport or to study them more closely. His constant reexamination of his own values changed his relationship with both society and nature.

Beginning with a Romantic and Transcendental view of natural processes as symbolic, Thoreau grew increasingly committed to a scientific view of nature. At the cabin, after a morning spent reading Anacreon or Chateaubriand, afternoon might find him undertaking a statistical analysis of temperature changes in regional bodies of water. He studied ecology twenty years before the German evolutionist Ernst Haeckel coined the term Oekologie. "This world," Thoreau wrote as he immersed himself ever more in the natural sciences, "is not a place for him who does not discover its laws." Later he was quick to see the validity of Darwin's discoveries about how nature changes slowly over time.

During his brief period living at Walden Pond, such careful attention to nature inspired and nurtured the best writing Thoreau had yet done, the seeds of the best he would ever do. There he wrote his first book, A Week on the Concord and Merrimack Rivers, and began what would become his best and most famous, Walden. My own book moves toward and culminates in this turning point, as a quirky but talented young man named Henry evolves into an original and insightful writer named Thoreau.