Elizabeth Kolbert draws on the work of geologists, botanists, marine biologists and other researchers to discuss five devastating mass extinctions and to predict the coming of a sixth.

NPR stories about The Sixth Extinction 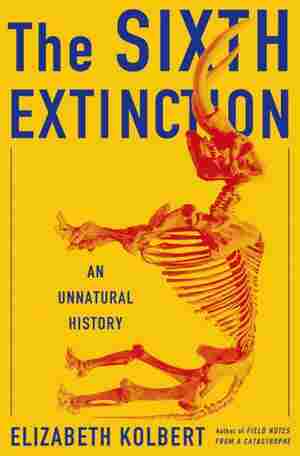 February 12, 2014 • Scientists think an asteroid killed the dinosaurs. In today's extinction, humans are the culprit.

February 11, 2014 • There have been five major mass extinctions over the last half-billion years, when the diversity of life on Earth suddenly and dramatically contracted. Scientists are currently monitoring an era of mass extinction predicted to be the most devastating since the asteroid impact that wiped out the dinosaurs. But this time around, says Elizabeth Kolbert, author of The Sixth Extinction, it's humans that are causing it.

Beginnings, it's said, are apt to be shadowy. So it is with this story, which starts with the emergence of a new species maybe two hundred thousand years ago. The species does not yet have a name— nothing does— but it has the capacity to name things. As with any young species, this one's position is precarious. Its numbers are small, and its range restricted to a slice of eastern Africa. Slowly its population grows, but quite possibly then it contracts again— some would claim nearly fatally— to just a few thousand pairs.

The members of the species are not particularly swift or strong or fertile. They are, however, singularly resourceful. Gradually they push into regions with different climates, different predators, and different prey. None of the usual constraints of habitat or geography seem to check them. They cross rivers, plateaus, mountain ranges. In coastal regions, they gather shellfish; farther inland, they hunt mammals. Everywhere they settle, they adapt and innovate. On reaching Europe, they encounter creatures very much like themselves, but stockier and probably brawnier, who have been living on the continent far longer. They interbreed with these creatures and then, by one means or another, kill them off. The end of this affair will turn out to be exemplary. As the species expands its range, it crosses paths with animals twice, ten, and even twenty times its size: huge cats, towering bears, turtles as big as elephants, sloths that stand fifteen feet tall. These species are more powerful and often fiercer. But they are slow to breed and are wiped out.

Although a land animal, our species— ever inventive— crosses the sea. It reaches islands inhabited by evolution's outliers: birds that lay foot-long eggs, pig- sized hippos, giant skinks. Accustomed to isolation, these creatures are ill- equipped to deal with the newcomers or their fellow travelers (mostly rats). Many of them, too, succumb.

The process continues, in fi ts and starts, for thousands of years, until the species, no longer so new, has spread to practically every corner of the globe. At this point, several things happen more or less at once that allow Homo sapiens, as it has come to call itself, to reproduce at an unprecedented rate. In a single century the population doubles; then it doubles again, and then again. Vast forests are razed. Humans do this deliberately, in order to feed themselves. Less deliberately, they shift organisms from one continent to another, reassembling the biosphere. Meanwhile, an even stranger and more radical transformation is under way. Having discovered subterranean reserves of energy, humans begin to change the composition of the atmosphere. This, in turn, alters the climate and the chemistry of the oceans. Some plants and animals adjust by moving. They climb mountains and migrate toward the poles. But a great many— at first hundreds, then thousands, and finally perhaps millions—find themselves marooned. Extinction rates soar, and the texture of life changes.

No creature has ever altered life on the planet in this way before, and yet other, comparable events have occurred. Very, very occasionally in the distant past, the planet has undergone change so wrenching that the diversity of life has plummeted. Five of these ancient events were catastrophic enough that they're put in their own category: the so-called Big Five. In what seems like a fantastic coincidence, but is probably no coincidence at all, the history of these events is recovered just as people come to realize that they are causing another one. When it is still too early to say whether it will reach the proportions of the Big Five, it becomes known as the Sixth Extinction.

The story of the Sixth Extinction, at least as I've chosen to tell it, comes in thirteen chapters. Each tracks a species that's in some way emblematic— the American mastodon, the great auk, an ammonite that disappeared at the end of the Cretaceous alongside the dinosaurs. The creatures in the early chapters are already gone, and this part of the book is mostly concerned with the great extinctions of the past and the twisting history of their discovery, starting with the work of the French naturalist Georges Cuvier. The second part of the book takes place very much in the present— in the increasingly fragmented Amazon rainforest, on a fast-warming slope in the Andes, on the outer reaches of the Great Barrier Reef. I chose to go to these particular places for the usual journalistic reasons— because there was a research station there or because
someone invited me to tag along on an expedition. Such is the scope of the changes now taking place that I could have gone pretty much anywhere and, with the proper guidance, found signs of them. One chapter concerns a die- off happening more or less in my own backyard (and, quite possibly, in yours).

If extinction is a morbid topic, mass extinction is, well, massively so. It's also a fascinating one. In the pages that follow, I try to convey both sides: the excitement of what's being learned as well as the horror of it. My hope is that readers of this book will come away with an appreciation of the truly extraordinary moment in which we live.