NPR stories about The Letters of Robert Frost 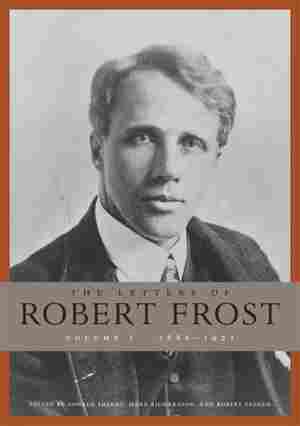 February 13, 2014 • A new volume of Robert Frost's collected, unexpurgated letters reveals that the poet thought a great deal about how people read him — and was hurt when his modernist friends didn't approve of his raw, sincere style. Reviewer J.P. O'Malley says the collection gives readers greater insight into Frost the poet and Frost the man.

[To John Bartlett. In a sequence of letters to Bartlett of which this is the first, RF provides an early and definitive statement of his poetics. Above the salutation, RF appended a note: "Maybe you'll keep this discourse on the sound of sense till I can say more on it."]

Those initials you quote from T. P.'s belong to a fellow named Buckley and the explanation of Buckley is this that he has recently issued a book with David Nutt, but at his own expense, whereas in my case David Nutt assumed the risks. And those other people Buckley reviewed are his personal friends or friends of his friends or if not that simply examples of the kind of wrong horse most fools put their money on. You will be sorry to hear me say so but they are not even craftsmen. Of course there are two ways of using that word the good and the bad one. To be on the safe side it is best to call such dubs mechanics. To be perfectly frank with you I am one of the most notable craftsmen of my time. That will transpire presently. I am possibly the only person going who works on any but a worn out theory* of versification. You see the great successes in recent poetry have been made on the assumption that the music of words was a matter of harmonized vowels and consonants. Both Swinburne and Tennyson aimed largely at effects in assonation. But they were on the wrong track or at any rate on a short track. They went the length of it. Anyone else who goes that way must go after them. And that's where most are going. I alone of English writers have consciously set myself to make music out of what I may call the sound of sense. Now it is possible to have sense without the sound of sense (as in much prose that is supposed to pass muster but makes very dull reading) and the sound of sense without sense (as in Alice in Wonderland which makes anything but dull reading). The best place to get the abstract sound of sense is from voices behind a door that cuts off the words. Ask yourself how these sentences would sound with- out the words in which they are embodied:

You mean to tell me you can't read?

I said no such thing.

You're not my teacher.

He says it's too late.

No good! Come back—come back.

Haslam go down there and make those kids get out of the track.

Those sounds are summoned by the audile imagination and they must be positive, strong, and definitely and unmistakeably [sic] indicated by the con- text. The reader must be at no loss to give his voice the posture proper to the sentences. The simple declarative sentence used in making a plain statement is one sound. But Lord love ye it mustn't be worked to death. It is against the law of nature that whole poems should be written in it. If they are written they won't be read. The sound of sense, then. You get that. It is the abstract vitality of our speech. It is pure sound—pure form. One who concerns him- self with it more than the subject is an artist. But remember we are still talk- ing merely of the raw material of poetry. An ear and an appetite for these sounds of sense is the first qualification of a writer, be it of prose or verse. But if one is to be a poet he must learn to get cadences by skillfully breaking the sounds of sense with all their irregularity of accent across the regular beat of the metre. Verse in which there is nothing but the beat of the metre fur- nished by the accents of the pollysyllabic [sic] words we call doggerel. Verse is not that. Neither is it the sound of sense alone. It is a resultant from those two. There are only two or three metres that are worth anything. We de- pend for variety on the infinite play of accents in the sound of sense. The high possibility of emotional expression all lies in this mingling of sense- sound and word-accent. A curious thing. And all this has its bearing on your prose me boy. Never if you can help it write down a sentence in which the voice will not know how to posturespecially.

That letterhead shows how far we have come since we left Pink. Editorial correspondent of the Montreal Star sounds to me [sic]. Gad, we get little mail from you.