Accessibility links
Five Came Back NPR coverage of Five Came Back: A Story of Hollywood and the Second World War by Mark Harris. News, author interviews, critics' picks and more.

NPR stories about Five Came Back 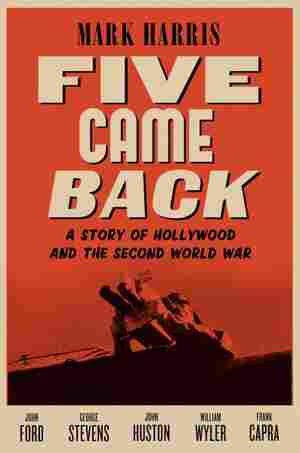 May 26, 2014 • A new book looks at how the military and Hollywood directors teamed up during the war. The films they made helped show Americans what was at stake, and served as evidence during the Nuremberg Trials.

March 3, 2014 • A new book looks at how the military and Hollywood directors teamed up during the war. The films they made helped show Americans what was at stake, and served as evidence during the Nuremberg Trials.

February 22, 2014 • Mark Harris' new book takes a look at five American directors who made films for the War Department during World War II — and how those films changed both their work and American cinema.

Read An Excerpt: 'Five Came Back'

John Ford was the first of the five to go. By the time the Imperial Japanese Navy attacked the U.S. military base at Pearl Harbor, he was already three thousand miles from Hollywood and had been in uniform for three months. When news of the bombing came, Ford, now a lieutenant commander in the navy, and his wife, Mary, were guests at a Sunday luncheon at the home of Rear Admiral Andrew Pickens in Alexandria, Virginia. A maid nervously entered the room holding a telephone. "It's the War Department, animal," she said, stumbling over her employer's rank. The visitors braced themselves as the admiral left his table to take the call. He returned to the party and announced, "Gentlemen, Pearl Harbor has just been attacked by the Japanese. We are now at war." As the guests dispersed, the admiral's wife tried to save the afternoon. "It's no use getting excited. This is the seventh war that's been announced in this dining room," she said. She showed the Fords a bullet hole in the wall left by a musket ball during the American Revolution. "I never let them plaster over that," she told them.

Mary Ford later remembered that for "everybody at that table, their lives changed that minute." But Ford had already changed his life, drastically and unexpectedly. By late 1941, most people in the movie industry, like most people in the country, believed that it was only a matter of time before the United States entered World War II. But what many of his colleagues viewed as a vague shadow spreading across the distant horizon, Ford accepted as a certainty that would require, and reward, advance preparation. For months before he left Hollywood for Washington, D.C., that September, he had been spending his nights and weekends overseeing the creation of a group he called the Naval Volunteer Photographic Unit, training camera operators, sound technicians, and editors to do their jobs under wartime conditions in close quarters; he even used gimbaled platforms in order to simulate attempts to develop film on ships while they pitched and listed. If war was inevitable, he believed the effort to record that war would be essential, and its planning could not be left to amateurs or to the bungling of War Department bureaucrats.

Still, Ford was an unlikely candidate to lead Hollywood's march toward battle. He was old enough to be the father of a typical draftee; at forty-six, he was just a couple of years from welcoming his first grandchild. And although he had done his part in Hollywood over the years on several of the industry's various committees — toiling among the interventionists, the fervent anti-Nazi campaigners, the leaders of ad hoc groups trying to provide aid in the Spanish Civil War — he hadn't been on the front lines of those battles recently. Since 1939, he had spent most of his time and energy directing a string of movies — among them Stagecoach, Young Mr. Lincoln, and The Grapes of Wrath — that had turned him into Hollywood's most respected filmmaker.

What moved Ford, just three weeks after completing production on How Green Was My Valley, the picture that would win him his third Best Director Academy Award in seven years, to step away from his thriving career and request a transfer from the Naval Reserve to active duty? Was it lingering shame at having failed the entrance exam for the Naval Academy at Annapolis as a high school student a quarter of a century earlier? Was it embarrassment about having missed America's entry into the First World War in 1917, when he was busy trying to break into the movie business as a stuntman, actor, and fledgling director? Ford's motivation was an enigma even to those closest to him — his wife, the colleagues with whom he made movies, and the drinking buddies at his favorite haunt, the Hollywood Athletic Club. "Is the ace director ... tired of the tinsel of Hollywood?" one news story queried. Ford seemed to delight in withholding any explanation at all, burnishing his public image as a taciturn and cryptic man by accepting an invitation to be interviewed about his decision and then declining to offer anything more expansive than, "I think it's the thing to do at this time."

It may have been that simple — a sense of duty, combined with a fear of how he might feel if he shirked it. That September, he had boarded a train for Washington, D.C., predicting misery and remorse for the able-bodied men in Hollywood who were still waiting, wondering what the war would mean and hoping the draft might leave them untouched. "They don't count," he wrote. "The blow will hit them hard next year." He checked into the Carlton Hotel, hung his uniform in the closet, and installed himself in his modest room with its single window of old, runny glass, stacking a couple of books on the bureau along with his pipes and cigars and living out of an open wardrobe trunk. He had the air, wrote a reporter who visited him, "of a man who might set out to sea with an hour's notice." In fact, that was just what he was thinking and even hoping; as Ford awaited orders from his mentor, intelligence chief "Wild" Bill Donovan, his mind was only on what was to come. "Things are moving apace here," he wrote to Mary, admonishing her to avoid the needless expense of late-night long-distance calls to him whenever she felt lonely or sad or angry, and telling her of the "hum of preparation and excitement" that the city was experiencing. "It would take volumes to say what I think of your unselfish courageous attitude in this present emergency," he added as he awaited her arrival in the capital. "Words literally fail me. I am very proud of you."

When Mary finally joined her husband in Washington, Ford gave his wife of twenty-one years something she had always wanted, a proper Catholic wedding ceremony. It was a preparatory gesture, a gift before what they both knew might be a long separation. And when the moment finally came, Ford and the men he trained, who had been streaming into Washington in the last few weeks, could barely contain their enthusiasm. Just hours after the news of Pearl Harbor broke, his Photo Unit recruits began showing up at the Carlton, knocking on the Fords' door, wanting to know what was going to happen next. The drinks started to flow, and as dusk fell on December 7, Ford and his men welcomed America into the war with cocktails.