A saga of three generations of the indomitable Cleary family begins in the early 1900s when Paddy Cleary, a poor New Zealand farm laborer, moves his wife and children to the Australian sheep station owned by his wealthy sister.

NPR stories about The Thorn Birds 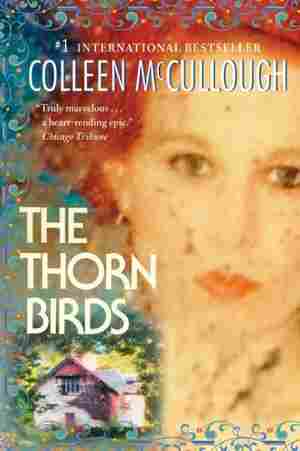 March 9, 2014 • Therese Walsh knows Colleen McCullough's famous novel — which contains not just sex, but sex with a priest -- might not be "appropriate" for teens. But, she says, it's the perfect sort of dangerous. 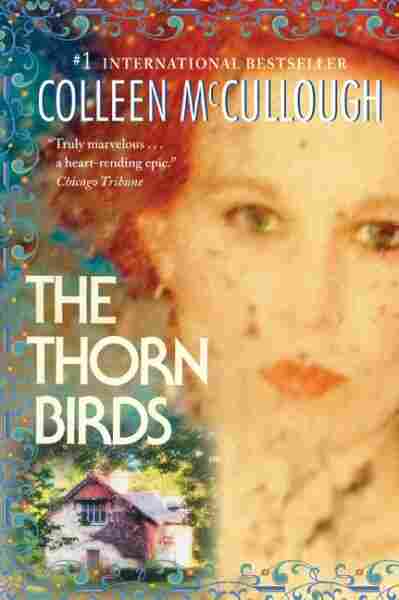 On December 8th, 1915, Meggie clearly had her fourth birthday. After the breakfast dishes were put away her mother silently thrust a brown paper parcel into her arms and ordered her outside. So Meggie squatted down behind the gorse bush next to the front gate and tugged impatiently. Her fingers were clumsy, the wrapping heavy; it smelled faintly of the Wahine general store, which told her that whatever lay inside the parcel had miraculously been bought, not homemade or donated.

Something fine and mistily gold began to poke through a corner; she attacked the paper faster, peeling it away in long, ragged strips.

"Agnes! Oh, Agnes!" she said lovingly, blinking at the doll lying there in a tattered nest.

A miracle indeed. Only once in her life had Meggie been into Wahine; all the way back in May, because she had been a very good girl. So perched in the buggy beside her mother, on her best behavior, she had been too excited to see or remember much. Except for Agnes, the beautiful doll sitting on the store counter, dressed in a crinoline of pink satin with cream lace frills all over it. Right then and there in her mind she had christened it Agnes, the only name she knew elegant enough for such a peerless creature. Yet over the ensuing months her yearning after Agnes contained nothing of hope; Meggie didn't own a doll and had no idea little girls and dolls belonged together. She played happily with the whistles and slingshots and battered soldiers her brothers discarded, got her hands dirty and her boots muddy.

It never occurred to her that Agnes was to play with. Stroking the bright pink folds of the dress, grander than any she had ever seen on a human woman, she picked Agnes up tenderly. The doll had jointed arms and legs which could be moved anywhere; even her neck and tiny, shapely waist were jointed. Her golden hair was exquisitely dressed in a high pompadour studded with pearls, her pale bosom peeped out of a foaming fichu of cream lace fastened with a pearl pin. The finely painted bone china face was beautiful, left unglazed to give the delicately tinted skin a natural matte texture. Astonishingly lifelike blue eyes shone between lashes of real hair, their irises streaked and circled with a darker blue; fascinated, Meggie discovered that when Agnes lay back far enough, her eyes closed. High on one faintly flushed cheek she had a black beauty mark, and her dusky mouth was parted slightly to show tiny white teeth. Meggie put the doll gently on her lap, crossed her feet under her comfortably, and sat just looking.

She was still sitting behind the gorse bush when Jack and Hughie came rustling through the grass where it was too close to the fence to feel a scythe. Her hair was the typical Cleary beacon, all the Cleary children save Frank being martyred by a thatch some shade of red; Jack nudged his brother and pointed gleefully. They separated, grinning at each other, and pretended they were troopers after a Maori renegade. Meggie would not have heard them anyway, so engrossed was she in Agnes, humming softly to herself.

"What's that you've got, Meggie?" Jack shouted, pouncing. "Show us!"

She clasped the doll against her chest and shook her head: "No, she 's mine! I got her for my birthday!"

Pride and joy won out. She held the doll so her brothers could see. "Look, isn't she beautiful? Her name is Agnes."

"Agnes? Agnes?" Jack gagged realistically. "What a soppy name! Why don't you call her Margaret or Betty?"

Hughie noticed the joint in the doll's wrist, and whistled. "Hey, Jack,look! It can move its hand!"

"Pooh!" His dirty brown hands locked about her wrists, closing tightly. "Want a Chinese burn? And don't be such a crybaby, or I'll tell Bob." He squeezed her skin in opposite directions until it stretched whitely, as Hughie got hold of the doll's skirts and pulled. "Gimme, or I'll do it really hard!"

"No! Don't, Jack, please don't! You'll break her, I know you will! Oh, please leave her alone! Don't take her, please!" In spite of the cruel grip on her wrists, she clung to the doll, sobbing and kicking.

"Got it," Hughie whooped, as the doll slid under Meggie 's crossed forearms.

Jack and Hughie found her just as fascinating as Meggie had; off came the dress, the petticoats and long, frilly drawers. Agnes lay naked while the boys pushed and pulled at her, forcing one foot round the back of her head, making her look down her spine, every possible contortion they could think of. They took no notice of Meggie as she stood crying; it did not occur to her to seek help, for in the Cleary family those who could not fight their own battles got scant aid or sympathy, and that went for girls, too.

The doll's golden hair tumbled down, the pearls flew winking into the long grass and disappeared. A dusty boot came down thoughtlessly on the abandoned dress, smearing grease from the smithy across its satin. Meggie dropped to her knees, scrabbling frantically to collect the miniature clothes before more damage was done them, then she began picking among the grass blades where she thought the pearls might have fallen. Her tears were blinding her, the grief in her heart new, for until now she had never owned anything worth grieving for.

Frank threw the shoe hissing into cold water and straightened his back; it didn't ache these days, so perhaps he was used to smithying. Not before time, his father would have said, after six months at it.