Accessibility links
Overwhelmed NPR coverage of Overwhelmed: Work, Love, and Play When No One Has the Time by Brigid Schulte. News, author interviews, critics' picks and more.

How to Work, Love, and Play When No One Has the Time

Drawing on interviews with neuroscientists, sociologists and working parents, a journalist explores the factors contributing to our collective sense of being overwhelmed, and seeks insights, answers and inspiration for achieving the perfect work-life balance. 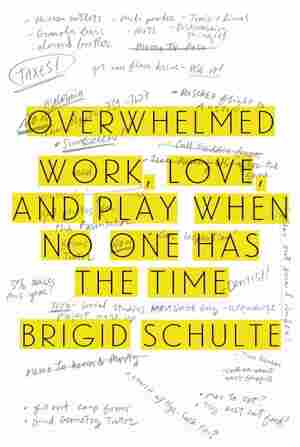 May 21, 2020 • With more people staying home due to COVID-19, journalist Brigid Schulte says it's impossible to ignore "the fact that women bear so much more of the burden of child care and housework." 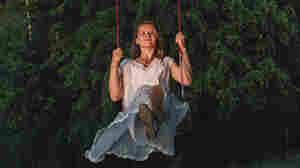 June 30, 2014 • Would you like to see the world more clearly? Commentator Tania Lombrozo extracts some useful life lessons from the field of psychology.

March 11, 2014 • If waiting for help when your car breaks down doesn't strike you as a leisurely activity, it may be time to reconsider. A new book looks at time management challenges of being a working parent.

March 11, 2014 • Brigid Schulte and her husband planned to have an equal partnership. But years down the road, "I realized that we had both fallen into very traditional roles without even realizing it," she says.

It is just after 10 a.m. on a Tuesday and I am racing down Route 1 in College Park, Maryland. The Check Engine light is on. The car tax sticker on my windshield has expired. The cell phone I'd just been using to talk to one of my kids' teachers has disappeared into the seat crack. And I'm late.

I screech into the crowded University of Maryland parking garage and wind ever higher until I at last find a spot on the top deck. My palms are sweating. My breath is shallow. My heart races and I feel slightly sick. I throw the car into Park, fumble ineptly with the parking ticket machine, and race down the stairs.

Only later, in revisiting this frantic day in my memory, will I realize that the sky had been that poignant shade of autumn blue and the leaves tinted with red. But as I live it, the stress hormones coursing through my veins tense my entire body and collapse my vision into a narrow, dizzying tunnel. Because I am filled with dread.

This is the day I have been avoiding for more than a year. Today, I am meeting with John Robinson, a sociologist who for more than a half century has studied the way people spend their most precious, nonrenewable resource: time. Robinson was one of the first social scientists in the United States to begin collecting detailed time diaries, counting the hours of what typical people do on a typical day, and publishing scholarly tomes summing up the way we live our lives. For his pioneering work, his colleagues call him Father Time. And Father Time has challenged me to keep a time diary of my own.

He told me that his research proves that I, a hair-on-fire woman struggling to work a demanding full-time job as a reporter for The Washington Post and be the kind of involved mother who brings the Thanksgiving turkey for the preschool feast and puts together the fifth grade slide show, have thirty hours of leisure time in a typical week.

Today, he is to dissect the mess of my time diaries and show me where all that leisure time is. I feel as if I am a bug, pinned on a specimen tray, about to be flayed and found wanting.

Because this is how it feels to live my life: scattered, fragmented, and exhausting. I am always doing more than one thing at a time and feel I never do any one particularly well. I am always behind and always late, with one more thing and one more thing and one more thing to do before rushing out the door. Entire hours evaporate while I'm doing stuff that needs to get done. But once I'm done, I can't tell you what it was I did or why it seemed so important. I feel like the Red Queen of Through the Looking-Glass on speed, running as fast as I can — usually on the fumes of four or five hours of sleep — and getting nowhere. Like the dream I keep having about trying to run a race wearing ski boots.

And, since I had kids, I don't think I've ever had a typical day.

There was the morning my son tae kwon do round house kicked me when I went to wake him up, which sent my coffee splattering over every single book on his bookshelf. I hurriedly wiped the pages dry so they wouldn't stick together and render the entire library useless. Which of course made me glaringly late for work and threw my plans for the day into the shredder. My sister Mary has these kinds of days, too. She calls them Stupid Days.

There was the day when my husband, Tom, was overseas again and I flew in late to a meeting with school officials to discuss why our then ten-year-old son, who knew more about World War II than I ever will, was floundering in fifth grade. I dragged along our second grader, still in her pajamas and slippers because she'd stayed home sick. And I nervously kept an eye on my BlackBerry because I was in the middle of reporting a horrific deadline story about a graduate student who'd been decapitated at an Au Bon Pain.

Then there was the time when the amount of work I needed to do pressed so heavily on my chest that I'd said no when my daughter asked, "Mommy, will you please come with me on my field trip today?" We'd been through this before, I told her. I couldn't come with her on every field trip. Then her big blue-gray eyes started to water. I felt all the breath drain out of me. I thought, at the end of my life, would I remember whatever assignment it was that seemed so urgent — I don't even recall it now — or would I remember a beautiful day in the woods with a daughter who had been struggling with unexplained stomachaches, was socially wobbly since her best friend moved away, and who still wanted me to be with her? I went. I spent three hours in the woods with her, guiltily checking my BlackBerry, then, after putting her to bed that night, went back to work for another four.

I have baked Valentine's cupcakes until 2 a.m. and finished writing stories at 4 a.m. when all was quiet and I finally had unbroken time to concentrate. I have held what I hope were professional- sounding interviews sitting on the floor in the hall outside my kids' dentist's office, in the teachers' bathroom at school functions, in the car outside various lessons, and on the grass, quickly muting the phone after each question to keep the whooping of a noisy soccer practice to a minimum. Some appliance is always broken. My to-do list never ends. I have yet to do a family bud get after meaning to for nearly twenty years. The laundry lies in such a huge, perpetually unfolded mound that my daughter has taken a dive in it and gone for a swim.