A definitive collection of time-travel stories from more than a century of literature features pieces by such leading authors as Douglas Adams, Isaac Asimov and Ray Bradbury and is complemented by a selection of informative nonfiction articles, including Charles Yu's "Top Ten Tips For Time Travelers." 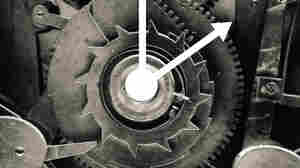 In This 'Almanac,' Fiction Makes The Best Time Machine

April 8, 2014 • The new Time Traveler's Almanac is a vast collection of chronological chronicles. Co-editor Ann VanderMeer says she was surprised to find that most time travelers just want to fix their love lives.

In This 'Almanac,' Fiction Makes The Best Time Machine 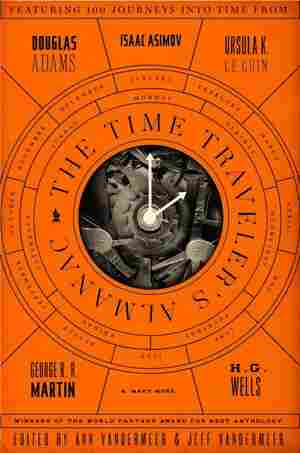 March 19, 2014 • The Time Traveler's Almanac is a gigantic new compilation of — you guessed it — stories about time travel. Reviewer Jason Sheehan says the selection of stories and authors is very nearly perfect.

"I gave a party for time-travelers, but I didn't send out the invitations until after the party. I sat there a long time, but no one came."

Stephen Hawking (from an interview with Ars Technica)

Time travelers, as you will soon discover, are often too busy to attend parties — and the parties they attend are only those they know in advance are going to be good ones. Just because you travel through time does not mean that you can take time out from saving the universe, preserving history, ﬁnding your true love, or hunting dinosaurs just to conﬁrm a famous physicist's theories. Indeed, the shadowy Preservationists Guild(1), founded in 2150, would argue that the worst thing for time travelers would be to show up at such a party.

Thus, most of us are left with the stories, the speculations — some of them based on facts and personal experiences — offered up by a variety of ﬁction writers. Which is not such a bad place to be. Because one thing we chrononauts know for sure: for more than a century, readers have been enthralled by time travel stories with classics from writers like H.G. Wells, Ray Bradbury, Richard Matheson, and Isaac Asimov becoming ﬁxtures of modern ﬁction. Whether thrilling, cautionary, or adventurous, these imaginative what-if tales transport us to other worlds, most often right here on our own planet.

Today, time travel is as familiar a concept to readers as space travel. Such stories are more popular than ever, including such recent bestsellers as Stephen King's 11/22/63, Charles Yu's How to Live Safely in a Science Fictional Universe, and Audrey Niffenegger's The Time Traveler's Wife. The resurgence of iconic TV series like Doctor Who has fed into this trend. In addition, time travel often incorporates elements of such hot subgenres like steampunk and historical ﬁc­tion, further extending its appeal. Time travel has also been popular with teens ever since the publication of such classics as Madeleine L'Engle's A Wrinkle in Time, extending to the present-day and such popular youth novels as When You Reach Me by Newberry winner Rebecca Stead. Meanwhile, movies like The Terminator, Back to the Future, Time Bandits, Donnie Darko, and Safety Not Guaranteed have shown the cinematic range of such tales.

Oddly, however, never before has there been an anthology that demonstrated the full depth and breadth of the time travel story. Perhaps this has something to do with the Preservationist Guild's Fifth Dictum: "Diffuse, disguise, confuse, obfuscate, deny." Most prior attempts have zeroed in on excellent yet decidedly science-ﬁctional tales in which the focus has been on the dreaded "time par­adox" — otherwise known as either "And Then I Found Out I Was My Own Father" or "Will I Be Kissing My Grandmother By Mistake?" That may be the bedrock of time travel ﬁction, but there is so much more: tales of fantasy and horror that involve travel through time like Kim Newman's "Is There Anybody There?," E.F. Benson's "In the Tube," and Rick Bowes's "The Mask of the Rex," — in addition to such truly strange science ﬁction as "Traveller's Rest," by David Masson, "Loob" by Bob Leman, and "Hwang's Billion Brilliant Daughters" by Alice Sola Kim.

Not all effective stories of time travel focus on epic consequences or seismic shifts in the course of history, either. What would you do if you could go back­wards or forwards in time? Perhaps you might do what Christine does in Karen Haber's "3 RMS, Good View" — use that ability to ﬁnd a better apartment. Maybe you'd use it to escape a war-torn country, as in Greg Egan's "The Lost Continent." Perhaps you'd even try to use it to get better grades in school ("The Most Important Thing in the World," Steve Bein), win an election ("The Final Days," David Langford), or, for that most delicate and yet powerful of reasons, for love ("If Ever I Should Leave You," Pamela Sargent).

You don't even need a time machine, believe it or not. Time machines are expensive to build and notoriously unpredictable — jury-rigged and perhaps even tampered with by the Preservationist Guild. That dial you spin to pick an era is always either stuck or spinning too fast or subject to variation from the slightest encounter with a paradox pebble while in the space-time corridor. You might wind up exiled forever making fungi spaghetti for yourself and a squirrel-like distant ancestor in a lonely shale cave at the butt-end of the Cretaceous Period if you're not careful.

So, no time machine? That's okay. You can time travel via the Devil's Intent, like Enoch Soames in Max Beerbohm's accurate historical account of the same name or by eating a special plant like Dr. Phipps' patient in Norman Spinrad's "The Weed of Time." You might even travel by means of magic, as in Tamsyn Muir's "The House That Made Sixteen Loops of Time." That might not seem very scientiﬁc, but you should see what the propaganda wing of the Preservationist Guild calls "magic" as opposed to "science." But the ways are myriad, and the Guild's members ﬁnite — they cannot be everywhere, suppress everything. Black holes, the telephone, mutation — any of these might sufﬁce to move you from the twenty-ﬁrst century to, say, Leonardo Da Vinci's bedroom as he secretly dressed up and painted himself in the mirror for Mona Lisa.

Obviously, the sheer variety of time travel stories has created some organi­zational challenges. Therefore, we have divided The Time Traveler's Almanac into four distinct sections, each corresponding to some major strand of time travel endeavor. (Each section is also bookended with nonﬁction: educational palate-cleansers for your enjoyment.)

Experiments — Stories in which individuals or organizations are experiment­ing with time travel or are subjects of experimentation.

Reactionaries and Revolutionaries -- Stories in which people are trying to protect the past from change or because they are curious tourists or academicians and want to accurately document different times.

Mazes and Traps -- Stories in which the paradox of time travel is front-and­center, and characters become trapped in those paradoxes.

Communiqués -- Stories about people trying to get a message to either some­one in the past or in the future — out of their own time.

These categories may seem stable and grounded in time-honored tradition. But we must, as a public service, point out that time travel stories are devious narratives. While we have managed to lock each tale into a particular category, we cannot guarantee that some anomaly or future temporal attacks by rival anthology editors will not mean that the copy you hold in your hands fails to match up exactly. There may even be wormholes and rifts that warp the very nature of the pages. (We cannot recommend the eel-skin 2040 edition, for example, nor the "cheese cloth" edition of 2079.)

For this reason, we hope you will dive deep in these sections, but do so while attached to a rope or bungee cord. Because some of these stories will pull you into other times and other places so immersively that you may ﬁnd it hard to get back to your era after reading them.

Because the truth is, ﬁction is one of the most effective time travel machines in the universe and always has been.

For those of our readers from 2150 and beyond: any and all comments about the Preservationist Guild herein are not actionable by twenty-ﬁrst-century law; therefore, the editors cannot be extradited to the future under any current and future time-travel statutes.