Accessibility links
On Being Blue NPR coverage of On Being Blue: A Philosophical Inquiry by William H. Gass, with a foreward by Michael Gorra. News, author interviews, critics' picks and more.

"Of the colors, blue and green have the greatest emotional range," writes William Gass in this re-issue of his classic meditation on everything associated with blue — blue movies, blue moods and just singing the blues.

NPR stories about On Being Blue 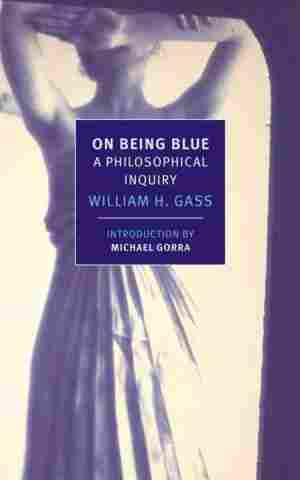 The Lively Linguistical Exuberance Of 'Being Blue'

March 16, 2014 • The NYRB Classics imprint has reissued William Gass's 1976 raucous philosophical inquiry into the color blue. Reviewer Juan Vidal says it's more an experience to be had than a book to be read.

Read An Excerpt: 'On Being Blue'

BLUE pencils, blue noses, blue movies, laws, blue legs and stockings, the language of birds, bees, and flowers as sung by longshoremen, that lead-like look the skin has when affected by cold, contusion, sickness, fear; the rotten rum or gin they call blue ruin and the blue devils of its delirium; Russian cats and oysters, a withheld or imprisoned breath, the blue they say that diamonds have, deep holes in the ocean and the blazers which English athletes earn that gentlemen may wear; afflictions of the spirit — dumps, mopes, Mondays — all that's dismal — low-down gloomy music, Nova Scotians, cyanosis, hair rinse, bluing, bleach; the rare blue dahlia like that blue moon shrewd things happen only once in, or the call for trumps in whist (but who remembers whist or what the death of unplayed games is like?), and correspondingly the flag, Blue Peter, which is our signal for getting under way; a swift pitch, Confederate money, the shaded slopes of clouds and mountains, and so the constantly increasing absentness of Heaven (ins Blaue hinein, the Germans say), consequently the color of everything that's empty: blue bottles, bank accounts, and compliments, for instance, or, when the sky's turned turtle, the blue-green bleat of ocean (both the same), and, when in Hell, its neatly landscaped rows of concrete huts and gas-blue flames; social registers, examination booklets, blue bloods, balls, and bonnets, beards, coats, collars, chips, and cheese ... the pedantic, indecent and censorious ... watered twilight, sour sea: through a scrambling of accidents, blue has become their color, just as it's stood for fidelity. Blue laws took their hue from the paper they were printed on. Blue noses were named for a potato. E. Haldeman-Julius' little library, where I first read Ellen Key's Evolution of Love, vainly hoping for a cock stand, had such covers. In the same series, which sold for a dime in those days, were the love letters of that Portuguese nun, Mariana Alcoforado, an overwrought and burdensome lady, certainly, whose existence I callously forgot until I read of her again in Rilke.

The first of these pocket pamphlets was, inevitably, the Rubáiyát. It had the right sentiments. It was the right length. It came in pretty quatrains. And like a pair of polished shoes, it had just the right world-weariness and erotic sheen. No. 19, the nearest I got to The Jug and Bough, was entitled, Nietzsche: Who He Was and What He Stood For, by M. A. Mugge, Ph.D. All those capitals were formerly for God. There was another, I remember, that reproduced the wartime speeches of Woodrow Wilson in a type which sometimes sagged toward the bottom of the page as though weakened by the weight of the words above. The blue of these books is pale by now, the paper brittle as communion bread, while my association of Wilde and Darrow with the color, once so intense, has faded too. My cock did not stand for Nietzsche either, nor did Mrs. Annie Besant's essay on the future of marriage cause a stir. One had to go to Liveright for that — to other colors: Black and Gold — where you could be warmed by Stendhal, Huneker, and Jules Romain, by Balzac and Remy de Gourmont, and where the decadence of Pierre Louys was genuine and not a bit of blueness dripped on scarcely curdled cheese.

John Middleton Murry edited The Blue Review for the three distinguished issues of its life, and something called The Blue Calendar predicted the weather from 1895 to 1898 without ever being right. Only a nickel, also blue, out of the same dry attic box, The Bibelot, a Lilliputian periodical with a Gothically lettered cover which fairly cried out ART, rose into my unhealthy hands. It came down from Maine instead of in from Kansas, and reprinted pieces that had previously vanished in the pages of The Dark Blue, a vague Pre-Raphaelite monthly with a title as frustratingly incomplete as a broken musical phrase. These rhapsodies went into print and out of sight the way trout, I'm sure, still disappear among the iridescences of my childhood Ohio's cold, bottomless Blue Hole, suddenly to emerge again in the clear, swift streams and shallow ponds it feeds as if nothing magical had happened to them. Each of the magazine's meager issues featured a single, slightly sacred, faintly wicked, and always delicately perfumed work by William Morris or Francis Thompson, Andrew Lang or others. The set I saw concluded quietly with Swinburne's tribute to the painter Simeon Solomon (even then in bluish oblivion). Now this fading poet's forgotten essay furnishes us with our first example, before we are quite ready for any: the description of two figures in a painting ... the prose of a shade of blue I leave to you.

One girl, white-robed and radiant as white water-flowers, has half let fall the rose that droops in her hand, dropping leaf by leaf like tears; both have the languor and the fruitful air of flowers in a sultry place; their leaning limbs and fervent faces are full of the goddess; their lips and eyes allure and await the invisible attendant Loves. The clear pearl-white cheeks and tender mouths have still about them the subtle purity of sleep; the whole drawing has upon it the heavy incumbent light of summer but half awake. Nothing of more simple and brilliant beauty has been done of late years.

Very beautiful, O God! is a blue tea-pot with two white cups attending; a red apple among oranges addeth fire to flame — in the white book-cases the books fly up and down in scales of colour, with pink and lilac notes recurring, until nothing remains but them, sounding over and over.

Then there is the cold Canadian climate and the color of deep ice. The gill of a fish. Lush grass. The whale. Jay. Ribbon. Fin.