This illustrated companion to the PBS and BBC series The Story of the Jews traces the Jewish experience, from their beginnings as an ancient tribal people to the opening of the New World in 1492.

NPR stories about The Story of the Jews 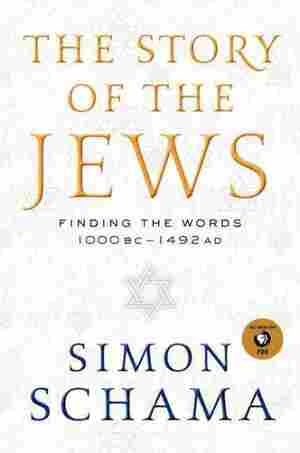 Excerpt: 'The Story Of The Jews'

This son, a soldier boy, was called Shelomam, an Aramaic version of my Hebrew name, Shelomo. His father's name was Osea, which was the middle name of my own aba. The time was two and a half millennia ago, in 475 BCE, the tenth year of the reign of Xerxes, the Achaemenid king of Persia who, though much bloodied in Greece, was still ruler in Egypt, where Shelomam and Osea lived. Xerxes had another decade on the throne before being murdered by his most trusted officer, Artabanus the Hyrcanian, who did the deed in cahoots with a helpful eunuch. Jesus of Nazareth would not be born for half a millennium. If the several writers of the Hebrew Bible are to be believed, it had been around eight hundred years since Moses had led the enslaved Israelites from Egypt into the desert mountains where, in possession of the laws given directly by Yahweh — indeed written with His very finger — they turned, despite recurring flings with idolatry and a yen for many other gods, into something resembling Jews.

The exodus from the flood valley of the Nile, the end of foreign enslavement, was presented by the Bible writers as the condition of becoming fully Israelite. They imagined the journey as an ascent, both topographical and moral. It was on the stony high places, way stations to heaven, that YHWH — as Yahweh is written — had revealed Himself (or at least His back), making Moses' face hot and shiny with reflected radiance. From the beginning (whether in the biblical or archaeological version), Jews were made in hill country. In Hebrew, emigrating to Israel is still aliyah, a going up. Jerusalem was unimaginable on the low fluvial plain. Rivers were murky with temptation; the sea was even worse, brimming with scaly monsters. Those who dwelled by its shores or shipped around upon its waves (like the Phoenicians or the Greeks) were to be detested as shifty, idolatrous and unclean. To go back to Egypt then, in the eyes of those for whom the exodus was the proper start of everything Jewish, was a fall, a descent to brazen idolatry. The prophets Ezekiel and Jeremiah — the latter even when he had gone to Egypt himself — had warned against this relapse, this un-Jewing. Those who fully succumbed, Jeremiah warned, would become 'an execration and an astonishment, a curse and a reproach'.

Heedless, the Israelites not for the first or last time disobeyed, trotting back to Egypt in droves. Why not, when the northern kingdom of Israel had been smashed by the Assyrians in 721 BCE, and a century later the kingdom of Judah was likewise pulverised by the Babylonians? All these misfortunes could, and were, interpreted by the writers of the Bible narratives as YHWH's chastisement of backsliding. But those on the receiving end could be forgiven for thinking: much good He has done us. Some 30,000 rams and ewes sacrificed for Passover in the Temple by King Josiah; a mass rending of raiment in contrite penitence for flirting with false gods; no help at all in fending off whichever hellish conquerors came out of Mesopotamia with their ringlets and their panthers and their numberless ranks of archers and javelin-men.

So the Israelites went down from their lion-coloured Judaean hills to the flood country of Egypt, to Tahpanhes on the delta, and Memphis halfway south, and especially to Pathros, the south country. When the Persians arrived in 525 BCE, they treated the Israelites not as slaves but often as slave owners, and above all as tough professional soldiers who could be depended on, as much as Arameans, Caspians or Carian Greeks from the western Anatolian littoral, to suppress Egyptian uprisings against Persia. They would also police the turbulent southern frontier where Nubian Africa began.

Shelomam, Osea's boy, was one of these young men, a mercenary — it was a living — who had been posted south all the way to the garrison of the Hayla hayahudaya, the Judaean Troop, on the island of Elephantine, just downstream from the first cataract of the Nile. Perhaps he had been assigned to caravan convoy, guarding the tribute of elephant tusks, ebony and Ethiopian boys that had been the pharaoh's due from Nubia and was now sent to the Persian governor in his place.

The father, Osea, was writing from Migdol, probably located on the eastern branch of the Nile delta, where Shelomam had previously been stationed. His letter, sent five hundred river miles south to await the soldier boy's arrival on Elephantine, was written in Aramaic, the daily tongue of the region and the entire empire, on the pressed-reed writing surface of papyrus. Patched together though this particular piece was, papyrus degrades very slowly. If kept from light, the ink remains dark and sharp. The square-form script, the same elegant style in which Hebrew would be written from the time of the Second Temple to our own, is still crisply legible. In Jewish memory it is as though Osea had written just yesterday. A worried father is a worried father. He can't help letting the boy know how he feels, right away, at the top of the letter: 'Well-being and strength I send you but from the day you went on your way, my heart, it's not so good.' And then, the inevitable clincher, the three words Shelomam must have known were coming, even without Osea having to write them, the phrase all Jewish boys hear at some point; the phrase from which history unfolds: 'Likewise your mother.'

A classic pre-emptive strike. My own father, Arthur Osea, was known to resort to it shamelessly when, as in the case of Egyptian Osea, he was on the back foot, worrying that the news which followed might not make his son altogether happy. 'Don't worry . . . your mother's a bit upset about this but . . .' Now what might get his pride and joy, his Shelomam, all bent out of shape? Trouble with pay and kit? Oh, don't get in a snit. 'That tunic and the garment you wrote

about, they're made, all right? Don't get angry with me because I couldn't bring them to Memphis in time (for your journey south). I'll bring them so you have them on your way back.' The pay? Yes, well, bit of a problem there, my boy. 'When you left Migdol, they wouldn't send us your money.' Worse, when Osea made enquiries about the back pay owing, he got the brush-off default mode for the minions of empires. Tremendously sorry, actually not my department, you see, but please do by all means forward your complaint to the appropriate officials. 'When you come back to Egypt, give them what for and they'll give you your pay.' So listen, my son, Osea goes on, brushing off any notion that he'd failed his boy in the crucial matter of the kit: 'don't cry. Be a man . . . Your mother, the children, everyone's well.'

It would be good to know in more detail how Shelomam lived in the frontier world of Jewish soldiers on Elephantine, but the letter stayed there, so perhaps he never made it to Elephantine, never got his tunic or his pay. Or perhaps he did, and left the note behind. At any rate, there it remained for two and a half millennia until an American amateur Egyptologist and ex-journalist for the New York Herald Tribune, Charles Edwin Wilbour, bought clay pots full of papyri from women digging for sebagh fertiliser on the island mounds in 1893. 'All these pap from Kom shown me by three separate women at different times,' Wilbour wrote in his diary. But once he saw the papyri were Aramaic, and twenty-seventh dynasty, he lost interest. Grander, older, pharaonic antiquities were his game.

Twenty years before, he had left Manhattan in a hurry when his crony, the king of city graft Boss Tweed, who had put some nice contracts Wilbour's way for his paper business, had been booted out of town. In Paris, ancient Egypt gave Wilbour a new life, its stupendous history learned from the eminent scholar Gaston Maspero. He rigged out a dahabiyeh so that he and his wife, Charlotte Beebee, an ardent suffragist, could sail the Nile with all conveniences, stopping by to help with digs in Karnak, Luxor, Thebes. High-domed Germans, French and British Egyptologists found his Yankee enthusiasm entertaining, sometimes even useful. Occasionally Wilbour would go and see Flinders Petrie in his rude tent and thought the British archaeologist

Sporting a prophetic beard, Wilbour made the Nile his living room for nearly two decades. When, near the end of that time, he stood on the mounds of Elephantine amid the grubbing women, he knew that the sebagh they were after for their crops was the pulverised

debris of ancient mud bricks, with enough hay and stubble mixed in to give it nitrous potency. But he was certainly unaware that somewhere beneath his feet was a decomposed Jewish city, the first we can reconstruct in the thrumming drone of its daily business: its property-line disputes over rooms and houses, exits and access; its marriages and divorces; its wills and prenups; its food and its dress; its oaths and its blessings. Oblivious to all this, Wilbour took the

papyri, neatly folded and bound, addressees on the outside as they had been in the fifth and fourth centuries BCE, to the Paris lodging where he expired in 1896.

Ten years later more extensive troves were found by German expeditions who picked at their content, took them to Berlin and Paris, and published a little more. Needless to say the British, whose pithhelmeted dominion Egypt had become, were not far behind. Papyri and inscribed clay potsherds — ostraca — duly ended up in the usual destinations — Oxford and the British Museum — and when the archaeological proconsuls chose to be grandly magnanimous, in Cairo. Some papyri were published in the early twentieth century but it was when the papyrus hoard passed to the Brooklyn Museum that the curtain truly rose on the marvel of Jewish Elephantine.