Accessibility links
The Heathen School NPR coverage of The Heathen School: A Story of Hope and Betrayal in the Age of the Early Republic by John Demos. News, author interviews, critics' picks and more.

John Demos documents the story of a widespread, early 19th-century missionary project that reflected the Christian views of a fledgling United States.

NPR stories about The Heathen School 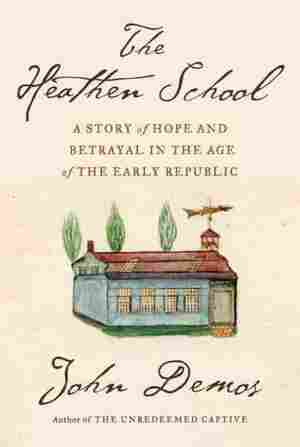 March 18, 2014 • The 19th century Connecticut school sought to convert young men from Hawaii, China, India and the Native American nations and then send them home as Christian missionaries. It did not go as planned.

Removal lies at the heart of the story we commonly tell about Indians in the nineteenth century. At first glance, removal and the grand project of "civilizing" heathen peoples appear to be opposites. Yet on the deepest level, they were joined — were, indeed, different expressions of the same impulse. For the civilizing process imposed a complete renunciation of traditional lifeways; as such, it was another form, a cultural form, of removal. In the case of Indians, it meant essentially this: Let them become farmers instead of hunters, Christians instead of pagans, cultured in the manner of white people instead of "savage." Then maybe — just maybe — they can be absorbed into the national mainstream. However, by the 1820s and 1830s, many whites had already given up on that possibility — at best it seemed impractical; at worst, dangerous — and were coming to favor actual physical removal. Just drive them out, send them far away — across the Mississippi River at least — and leave them entirely to themselves. (And then let us have their land.)

One way or another — through either kind of removal — the native presence would be finished; hence the increasingly prevalent trope of "the vanishing Indian." To be sure, this supposed "vanishing" was cause for regret, even guilt, among a certain portion of whites, mostly "benevo- lent" reformers on or near the East Coast. Farther inland, and especially among those living close to the frontier, neither regret nor guilt would be much in evidence. There, the prevalent attitude could be reduced to

a single phrase: Be gone! That suggests another, much sharper term — drawn from our own twenty-first-century world—to replace the more neutral-sounding removal. In short, "ethnic cleansing."

Removal—in the straightforward sense of relocation—had been part of American history from the settlement years onward. In its earliest phase, it was irregular, haphazard, ad hoc, and closely tied to warfare. Thus, in seventeenth-century Virginia, sporadic outbursts of violence (especially in 1622 and 1644) between white settlers and the so-called Powhatan Confederacy led to a treaty confining local Indians to a small part of the territory previously theirs. Farther north, in New England, a similar outcome followed the conclusion of the Pequot War (1637) and King Philip's War (1676). In Carolina, after defeat in a bloody conflict with colonists (1713), thousands of Tuscarora Indians migrated north to join the Iroquois Confederacy.

As time passed, the transfer of lands and the movement of native peoples could also be accomplished peaceably, through a combination of formal purchase, negotiation, and government pressure. This was repeat- edly the case, for example, in eighteenth-century Pennsylvania, where Shawnees and Delawares ceded one large tract after another, by deed or treaty, before moving on to what is now eastern Ohio. In the 1740s and 1750s, the Ohio country itself became a scene of contest between colonists and native tribes — until the Treaty of Fort Stanwix (1768) secured major Indian land cessions and established a new "line of settlement" roughly following the course of the Ohio River. Here, the Delaware (or Lenapi, as they originally called themselves) were directly involved once again. Indeed, the story of this particular group, spreading across many generations, was especially remarkable for serial removals. After relocating from Pennsylvania to Ohio, the Delaware would go on to Indiana (Treaty of Greenville, 1795), to Missouri (several more treaties, 1818–26), to Kansas (1829), and finally to Oklahoma (1850s and 1860s). One might well say that removal became central to their very identity.

At the start of the nineteenth century, the vast territory obtained through the Louisiana Purchase appeared to open new avenues for removal. And the process itself became more organized, more systematic, with governmental authorities — at both federal and state levels — increasingly in charge. Thomas Jefferson, as president and prime mover for the Purchase, was especially active this way. In 1804, Congress formally authorized him to negotiate with "Indian tribes owning lands on the east side of the Mississippi [to] exchange lands [for] property of the United States on the west side."

The results of such initiatives were profound. To the north, there began a complex process of relocating various tribes in the vicinity of the Great Lakes: Chippewa, Ottawa, Pottawattamie, Wyandotte, Menomenie, Winnebago, Sioux, Fox, Sac (among others). The overall direction of this movement was from the east side of the lakes (especially the Michigan Territory) to the west side (Wisconsin, which had also gained territorial status), and then to sites fully across the Mississippi. In the meantime, too, some native groups had moved to Wisconsin from much farther east — for example, Iroquois from upstate New York, and the Stockbridge (Massachusetts) Mahicans.

But it was in the Southeast that removal would have its most dramatic enactments — and would most fully approximate ethnic cleansing. There, what were known as "the five civilized tribes" — Choctaw, Chickasaw, Creek, Seminole, and Cherokee — remained relatively well entrenched into the early nineteenth century. However, a series of treaty-based land cessions, begun long before, had eaten away much of their territorial base. Then, in the 1830s, all five were subject to federally mandated relocation in the newly designated Indian Territory (what is today the state of Oklahoma). Some ten thousand Choctaws were forced from their homes in Mississippi between 1831 and 1833. The migration of the Chickasaw from southern Alabama was spread out over a longer period, roughly 1837–50. The Creek mounted a strong resistance, but even so they were driven out (also from Alabama) during a three-year stretch, starting in 1834. The Seminole fought removal with extreme tenacity, retreating from their original settlements along the coast of Florida to its swampy interior, from where they conducted sporadic guerilla warfare against federal troops, lasting well into the 1850s. Most were eventually put to flight or killed, but enough remained to support several reservations, which are part of Florida to the present day.

And then, the Cherokees — the most famously removed group of all. Considered whole, theirs is a story of remarkable, but doomed, achievement. As such, it shadows, on a vastly grander scale, that of the Foreign Mission School — high hopes, valiant effort, leading to eventual tragic defeat.

Indeed, by 1825, the Cherokees were widely considered "the most civilized tribe in America." This description included both a salute to

all they had accomplished and the seeds of their destruction. "Civilization" remained the official goal. But success with the goal might under- mine other interests crucially important to whites. Success would mean accepting them, on equal terms and with equal rights. Success would mean competing with them for valuable resources. Success would mean including them as partners on the route to America's "manifest destiny." Was the country at large ready for all that?

Copyright (c) 2014 by John Demos. Excerpted by permission of Knopf, a division of Random House, Inc. All rights reserved. No part of this excerpt may be reproduced or reprinted without permission in writing from the publisher.