Returning to Lagos after several years in New York City, a young Nigerian writer rediscovers his hometown as both a foreigner and a local while reconnecting with old friends, comparing Lagos to the home of his memory and realizing how he himself has changed.

NPR stories about Every Day Is for the Thief 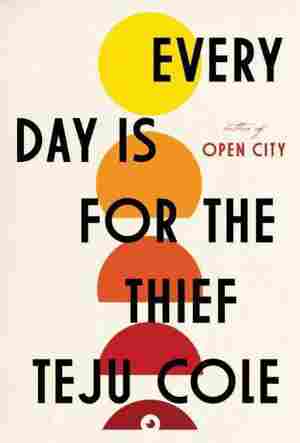 April 26, 2014 • In Teju Cole's newest, elliptical novel, an unnamed narrator visits his native country, alarmed at what has changed, and at what hasn't.

March 25, 2014 • Teju Cole's latest book describes a young New York doctor's visit back to his Nigerian hometown, where he encounters a Clockwork Orange world of misery and corruption.

March 24, 2014 • Teju Cole writes of a young man's return to Nigeria in Every Day Is for the Thief. He says his narrator is "somebody who's been away a long time and doesn't want to pretty up the picture at all."

Excerpt: 'Every Day Is For The Thief'

A gentle music rouses me the next morning: the muezzin's call to prayer floating across the forested valley that separates the house from the minaret. I rise and pad through the house. Everyone else is still asleep, my uncle and aunt, my cousins, the servant. The electricity has not been restored yet. Natural light leaks into the living room. I make tea. Cockerels' crows, from another direction, skitter over the muezzin's Arabic. A smell of cooking smoke arrives from the distance.

From the back porch of the house is a view into a gorge. The view used to amaze me when I visited this house in the past, and while I was away my thoughts would periodically wander over to it. The gorge is now far from pristine. Trees have been cut down, and tracts of land have been carved out for houses. Ugly buildings in various stages of completion now loom out of it. Clinging to the houses like barnacles are white satellite television dishes. Farther away is a half-built evangelical mega-church. It is a losing battle for the forest. But it is only daybreak, and all is as yet tranquil. I stand on the porch drinking my tea. Viewed from a certain angle, the gorge can still look primeval, can still conform to a certain idea of Africa: no gasoline fumes, no gleaming skyscrapers, no six-lane highways. Africa as bush and thicket. The morning sky is restless. Dark clouds gather in clumps and, little by little, the clumps gradually disappear. Light traces silver lines across the wide sky. I finish my tea and go back inside.

The hallways of the house are bigger than they used to be. The floor is broad and covered with curiously soft white tiles. It is as though I have shrunk in the years since I was last here, or that the house itself has gently expanded in the heat, increasing by small amounts in each month of my absence to reach these dimensions. The door frame is wide and high enough for a family of acrobats to walk through in formation. And there they suddenly are, in my presence, standing on each other's shoulders, their limbs in astral shape. They negotiate the opening, thread it.

Part of this story has been told before: the broad doorway, the acrobats. These are incidents from a book I love. Incidents, to be exact, from a dream in that book. But is it any less real to me now for having once happened to someone else elsewhere? For having been recorded in print in the dream, twenty five years ago, of a great writer returning to his ancestors' Sri Lanka? This is my story now, not his. I am in my aunt's house, but I make it a substitute for that other house of vanished histories, my demolished childhood home. I gape at the soaring ceiling and look down again, just in time to see the smallest of the acrobats restore her grip. The human star is preserved.