Accessibility links
Parentology NPR coverage of Parentology: Everything You Wanted to Know About the Science of Raising Children but Were Too Exhausted to Ask by Dalton Conley. News, author interviews, critics' picks and more.

Outlines an engaged approach to child-rearing that is based on strategies for fostering child creativity and confidence, describing the author's experiences with such methods as bribing, conditioning psychology and placebo medications. 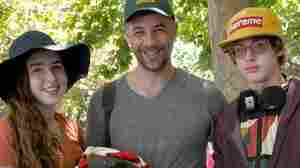 March 23, 2014 • Irreverent dad and sociologist Dalton Conley says parenting books take the wrong approach. He wants to teach parents to make sense of available research in order to apply it to their own kids.

A philosophy of highly engaged child rearing in which one (A) accesses all relevant research; (B) makes a practice of constantly weighing said research against one's own experience and common sense; and (C) invents unique methodologies on the fly and fearlessly carries them out in order to test creative hypotheses about best practices for one's own particular offspring.

Like Mormonism and Jazz, Parentology is a uniquely American, improvisational approach to the raising of children. It relies on both modern science and old school intuition.

Parentologist: One who practices parentology.

Chapter 1: What Not to Expect When You're Expecting

"Everything our parents said was good is bad.

WHAT WOODY ALLEN claimed thirty-five years ago holds equally true today: parenting advice is always changing and often wrong. In 2014, milk is good again (the Dutch have the highest per capita dairy consumption and as a result are the tallest population on Earth and have the lowest rate of osteoporosis and hip fractures in old age) — unless of course you are one of the increasing ranks of the lactose or casein intolerant. Sun is also good again, since one of the theories du jour is that we collectively suffer from a vitamin D deficit and seasonal affective disorder. But too much sun is bad if you are skin type one (i.e. pasty white). Meanwhile, if you're darkskinned, you can never get enough rays in North America. College, it turns out, is neither good nor bad — if you're not poor, what really matters is gaining admission, regardless of whether you go or not.

Given such complex and contradictory messages, perhaps it's time to scrap the parenting advice book and learn how to figure out things for ourselves. After all, since we have no common culture or history, we American parents are constantly improvising on our kids whether we admit it or not. What this book argues is that we should rationalize these jazz-like parenting approaches into a scientific methodology: experimental parenting. Parentology — as I'm calling this approach — is all about trial and error, hypothesis and revision. For there's simply no one-formula-fits-all to raising successful, compassionate kids in today's impossibly complex and radically overstimulating world.

And just to be clear: by experiment, I don't mean raise one child in a box and one in the forest and see how they turn out. That is, experimental parenting doesn't mean randomly and injudiciously trying out any crackpot theory that springs to mind on your precious little guinea pigs. Parentology, in fact, involves first and foremost reading and deciphering the scientific literature — typically not referenced directly in a parenting book — drawing your own conclusions, and applying them to your kids. There is no counterfactual or control group for your kids, so keep good notes in your own lab manual.

I've discovered after my long professional journey as a scientist and my own personal journey that what really matters in the end is parental love as expressed through engagement. As one psychotherapist friend reports, "Nobody lies on my couch and complains that they got too much attention." My particular form of engagement — through the science of children — happens to fit both my skill set and what kind of kids I'd like to produce: independent, critical thinkers. But be careful what you wish for: I created creatures who question every aspect of my parenting and demand evidence for anything I request them to do.

What's more, over the course of my parental experience — one that included weeks in the neonatal intensive care unit with our firstborn, medicating our second child, and parental divorce — I eventually realized the limits of my professional calling: In the face of the unexpected challenges that each unique child brings, scientific objectivity is no match for the torrent of parental affection and protectiveness that I could not have anticipated feeling and which almost every parent recognizes.

That is, rather than try to tap into parental guilt and worry through providing a hard-to-follow formula (like three hours of violin practice a day), I aim to assuage those same feelings by telling parents that there are many roads to Carnegie Hall. And, more important, most roads to a happy, decent, caring, well-adjusted, independent adult don't necessarily lead through Carnegie Hall or MIT. So, instead of a rigid formula, focused on a single, societal-identified definition of success, I offer an insurgency strategy: more flexibility and fluidity, attention to (often counterintuitive, myth-busting) research, but adaptation to each child's unique and changing circumstances. Trial and error. Hypothesis revision and more experimentation about what works. In other words, the scientific method.

Kids won't break — mine haven't (so far, at least). Most parents fret that they are deviating from some ideal norm — that they are somehow weird and this eccentricity will get in the way of their kids' opportunities. I can't imagine you'll think that after you read about my family and parenting practices. And if the science of children seems intimidating, don't worry; it seemed daunting to me at first, too, and I'm a professional social scientist.

Excerpt from Parentology: Everything You Wanted to Know about the Science of Raising Children but Were Too Exhausted to Ask by Dalton Conley. Copyright 2014 by Dalton Conley. Reprinted by permission of Simon & Schuster, Inc, NY.