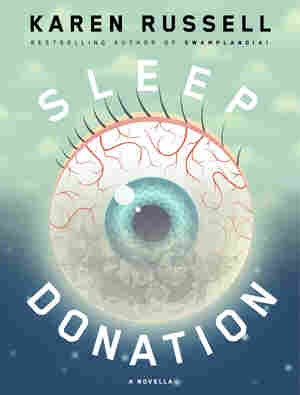 March 26, 2014 • Karen Russell has set her latest story in a terrible future where insomnia has become a national crisis. Sleep Donation is a digital download from a new publisher called Atavist Books.

March 26, 2014 • Karen Russell's new book imagines a mysterious insomnia epidemic so serious that many are dying from lack of sleep. But the cure — sleep donations from babies — is hard to swallow.

The siren goes, and we code for dispatch. Nine times in twenty, lately, it's the same address: 3300 Cedar Ridge Parkway.

Then we get a call back, saying the dispatch is cancelled.

Then we get a third call: no, disregard the cancellation; get a Sleep Van to the property, stat.

What's happening, as revealed to us by a visibly distraught Jim: Mr. and Mrs. Harkonnen are having a "dispute."

"Mr. Harkonnen says he wants to drop out."

"So what?" says the intern. "We don't even use his donations."

"No, jackass. He's trying to pull out with Baby A."

Everybody looks over at that.

Rudy slaps his bald spot and leaves his hand there. A grapefruit hue spills underneath his fingers, as if the scalp is blushing.

Jim freezes in the center of the trailer, in full view of every staffer, and rubs his fists against his gray eyes. It's a pitiful and futile gesture to witness, like watching an animal cower inside a plastic cage. We can see how scared Jim is of losing both things, Baby A and our good opinion of him.

Six staffers are working the phones tonight, and we are all mentally coaching him: Don't cry, Jim.

Our Sleep Station has an unusual, top-heavy hierarchy — we have two supervisors, the Storch brothers. They are former CEOs who left the business world at the height of the Insomnia Crisis and now freely give of all their resources to the not-for-profit Slumber Corps. Money, time, intellect, leadership, creativity, toilet seats. The Storches made their fortune in the ergonomic toilet business. You may have seen their advertisements: "To shit upon a Storch feels better than a visit to your chiropractor." Their extreme altruism is a provocation to everyone else on staff — an inducement to work even harder, a reminder that we could always be giving more.

Rudy and Jim have been my supervisors for seven years; I was the first recruiter assigned to their team. I don't socialize with them outside work. Our contact is limited to this office (unless you count our public performances at Corps fund-raisers, the Charity Balls and Charity Golf-Offs). But I know every shadow of my bosses' faces; all of their Storchy tics; that upsetting thing Rudy does with his pen caps; what Jim's not saying at our meetings. The brothers are middle-aged Irish twins, clean shaven and built like longshoremen. Externally, they have slate eyes and cranberry-red hair balding in identical horseshoe patterns. Internally, each brother has his own uniquely fucked emotional metabolism. Rudy, for example, is currently managing his despair by bawling out the interns, sweat jewelling all along his dusky face like a July whisky glass.

The Storches are celebrities in the sleep crisis community. Eight years ago, the brothers served together on the inaugural Slumber Corps Board of Directors at Headquarters in Washington, D.C. Within months, the Corps had established outposts in every major city, pullulating green offshoots of the D.C. base. Soon local branches began operating more or less independently, soliciting donations for money and sleep, whereupon the Storch brothers promptly requested a demotion to this low-prestige placement in their home city. A "Solar Zone" assignment. We serve an urban core where the rate of insomnia is twenty-two percent higher than the national average. Our Pennsylvania city has one of the greatest REM-sleep deficits on the East Coast (although we are certainly not the worst hit: Tampa, riddlingly, currently leads the nation in new cases of the insomnia; the governor's budget cuts in that Sunshine State have meant that Floridian sleep scientists remain stalled at the "dang"/"go figure" stage of their research). Hundreds of our old neighbors, friends, coworkers, and teachers are new insomniacs. They file for dream bankruptcy, appeal for Slumber Corps aid, wait to be approved for a sleep donor. It is a special kind of homelessness, says our mayor, to be evicted from your dreams. I believe our mayor is both genuinely concerned for his insomniac constituency, and also pandering to a powerfully desperate new voting block.

Currently the NCEH is investigating possible environmental causes in our city: everything from the water table to disturbed eagles' nests to the brilliance of the moon on grass, to the antique screams of the historic monorail.

I grew up here, too.

We operate out of a Mobi-Office. Six interlocking trailers, dry-docked on a vacant downtown lot which the Corps leases from the city. "The redneck labyrinth," Rudy calls it. A former FEMA engineer designed it as a temporary accommodation; a base camp for local teams working at the frontiers of the crisis. We've been working out of our tin can for half a decade. Nobody suggests moving into a brick-and-mortar office; nobody wants to peer through glass windows, in a building with a foundation, and admit that the insomnia emergency is now a permanent condition.

You'd think it would be difficult to hide in a trailer. But I'm chameleoned next to the phone wall, near the black window. Some intern has made curtains for the trailer windows, snaggy lace, which look nothing like curtains, in fact, but vestments tiny and obscene: bridal veils for mice, chinchilla negligees. They flutter in the trailer's manic air-conditioning. Outside, the moon is a colossus. Its radiance makes every white of human manufacture seem dingy, impure.

I turn from the moon, remove the headset; I give myself one more blank moment.

"Edgewater!" screams Rudy. "There you are! We have a major goddamn problem."

"The mother is solid, she's one hundred percent. The father, though — "

"The father is afflicted with doubts."

"The father is a selfish prick."

"Bastard hung up on me twice."

"Whose signature is on the consent? Do we have both?"

Now everyone is staring at me.

"Edgewater will handle this," Rudy prophesies, staring right at me.

"Mr. Harkonnen needs to be reminded of why this is important."

"I think he knows, Jim. I already pitched them."

"Not the way you tell it, Edgewater." Rudy beams at me. Rudy is the kind of boss who goes from screaming to beaming in two seconds flat, at a psychopathic velocity.

"Only a stone would refuse to donate after your pitch."

Pride heats my eyes. It's reprehensible, but that's what happens.

Jim and Rudy pour it on even thicker, emphasizing that I am indispensable to the organization, that the Corps would be lost without me, et cetera.

We look at my hands, which are shaking. I feel proud again, which has got to be the wrong response to a set of involuntary tremors. My body knows what I'm about to do, and it's balking, just like Mr. Harkonnen.

"You are the genuine article, Trish."

Rudy is a bad recruiter. I've seen him in action. Potential donors sway on the brink of a yes, prepared to surrender to the gravity of the appeal, but then Rudy gets overzealous, Rudy turns the solicitation into a game of coercion, until at last his lip-smacking anticipation of their gift makes them wary again, and they stiffen into a no.

"That's how we got Baby A, you know," Jim whispers to the intern, Sam Yoon, a college junior in a mint-green dress shirt who is earnestly frowning as I exit the trailer; it's a whisper I know I'm meant to hear.

"Trish pitched Mrs. Harkonnen at a Sleep Drive in a parking lot. Nabbed her right outside the grocery store, schlepping Baby A. Watch her pitch sometime. Shadow her at a Drive. She's just pure appeal, pure passion for the cause. Her sister was Dori Edgewater."

What distinguishes me as a recruiter, I'm told by Rudy and Jim, is that my sister's death is evergreen for me, a pure shock, the freshest outrage. I don't have to dig around with the needle; that vein is open on the surface.

"She gets emotional, and people really respond."

"Describes the sister like she's standing right in front of her."

He's a mid-sentence self-startler, Jim. "Hiccups of insight," he calls these moments. Whenever my boss is struck dumb by his own epiphanic inner light, I picture a tiny deer jolted out of its grazing with grass in its mouth, paralyzed by the brilliant approach of a Mack truck.

"Wait a sec, Rudy, why the hell do we call it that? A 'wake'? For a dead gal? That's terrible. That's goddamn macabre."

"I've wondered that myself. Seems a pretty grim joke."

"Oh, there's definitely a reason," says the brown-nosing intern. "Some Catholic logic. Or is it a Jews' thing?"

"People respond!" bellows Rudy. "Edgewater, she's a little engine. Even our most resistant demographics will give to her. Males, retirees! Greenwich bankers, West Texas construction workers. The Southeast Asian community, where, as you well know, there is a culturally rooted suspicion of Sleep Donation."

"Of course." The intern nods.

"But they have no immunity to Edgewater's story."

I am hovering near the trailer door, holding my breath. They keep talking, and I listen. I desperately need what they are offering. A faith-transfusion. The why and the how of the organization. Our work and its value.