Burlesque dancer Blanche Beunon tries to discover who murdered her friend Jenny, who was shot through a window in a railroad saloon in 1876 San Francisco, amid a record-breaking heat wave and smallpox epidemic. 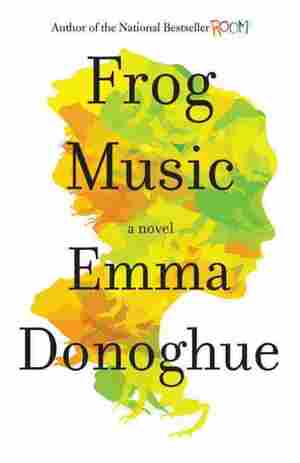 April 3, 2014 • Author Emma Donoghue's new novel, Frog Music, imagines a new solution to the 1876 murder of a San Francisco frog-catcher — and fits in a lot of raw and raunchy popular songs along the way.

Sitting on the edge of the bed in the front room, Blanche stoops to rip at the laces of her gaiters. "'Dors, min p'tit quinquin — '" Her husky voice frays to a thread on the second high note. She clears her throat, rasping away the heat.

A train hurtles north from San Jose. The light from the locomotive's headlamp jabs through the long gap between the peeling window frame and the green blind, illuminating the room for Blanche: the shabby bureau, the bedstead, and Jenny, lolling against the scarred headboard. The Eight Mile House shakes like cardboard as the freight cars rattle by. Here at San Miguel Station, they're right at the southern boundary — the last gasp — of San Francisco.

Two days Blanche and Jenny have been boarding with the McNamaras, auld acquaintance to Jenny but still virtually strangers to Blanche. How much longer will Blanche be stuck in this four-room shack, she wonders, on the parched outskirts of the outskirts of the City? And how will she decide when it's even halfway safe to go back?

Blanche has got the left gaiter off now, and the boot below it, but the laces on the other one have snagged, and in the light of the single candle stub she can't find the knot; her long nails pick at the laces.

Sleep, my little child, my little chick, my fat grape. The old tune comes more sweetly now, the notes like pinpricks. A silly Picard rhyme her grandmother used to sing to Blanche in the tiny attic in

"'Dors, min p'tit quinquin, min p'tit pouchin ... '" Jenny slides the refrain back at her like a lazy leaf in a river.

It still amazes Blanche how fast this young woman can pick up a song on first hearing.

"How does the rest of it go?" Jenny asks, up on one elbow, brown cheeks sparkling with sweat. Her flesh from nose to brows is puffy, darkening. She'll have a pair of black eyes by morning.

But Blanche doesn't want to think about that. Jenny doesn't harp on what's past, does she? She wears her bruises like parade gear, and they fade fast.

Blanche sits up straighter on the edge of the bed and sings on.

"'Shut your trap, little baby, before I shut it for you,'" Jenny translates very loosely, nodding. "Guess most lullabies boil down to that."