Title
A View from a Broad
Author
Bette Midler

In this re-release of her 1980 memoir, Grammy Award-winning performer Bette Midler reflects on her early career, her fear of flying and the wisdom she learned along the way.

NPR stories about A View from a Broad 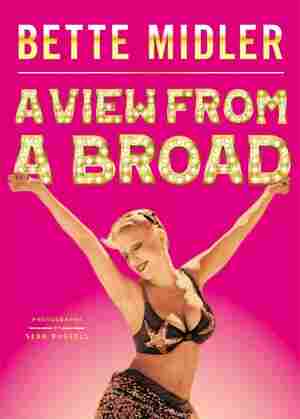 Excerpt: A View From A Broad

Long, long ago, around 1980, through a veil of hot, briny tears, I seem to recall that I toured the world with my show, for the first time, and lived to tell. The book you hold in your hands was the "confaction" that came out of that tour. I was thirty-five years old, cute as a button and excited beyond belief. I was going to see the world, and the world was going to see me. "I knew so little of the world: Slander, not geography, had always been my strong suit" . . . and there was more than a grain of truth in that. I was clueless. My international travel was limited to an earlier trip to Paris, where I was surrounded by schoolchildren who made fun of my shoes.

We were a motley crew; a quarrelsome band that murdered the time; three libidinous girl singers; and many, many attractive soundmen, stagehands, road managers, drivers, and fans. It was a powder keg, to put it mildly. Add in new and various faces and races that wanted to be our best friends every third day, new drugs to try and new bars to visit, and you can imagine how hard it was to keep chaos at bay.

One of the things that surprised me most was that the world knew me! And they seemed to love me and showered me with affection at every stop: bouquets, gifts, letters, notes, telegrams, confetti, invitations and standing ovations. It was a whirlwind, a mob scene; I was at the center of it and it was hard to separate the best intentions from the worst.

And the shows were great; some of the best of my life.

In those days, if I had even the germ of an idea, someone would move heaven and earth to make it happen. I am a reader, and have been my whole life. I love books, and love all the romance associated with them. The bindings! The illustrations by N. C. Wyeth, Maxfield Parrish, Jesse Wilcox Smith, et al. . . . The dreadful lives that every­one led, being paid by the word, too tragic. Those green eyeshades! Fabulous! I even adore editors: How marvelous to be squirrelled away in some dank corner spinning literary dross into gold!

I had decided I wanted to do a book before we started rehearsals, and lo and behold, the publishers were lined up in droves. What clout I had in those days! My best friend, Jerry, and his boyfriend, Sean (not his real name, which was Wesley — don't ask), searched maps and guidebooks to decide where we could shoot pictures to accom­pany whatever was to come. We did many by-the-seat-of-our-pants photo shoots when abroad, like the Penguin Parade in Australia, and though most of the photos never made the book, I remember many of the charming, out-of-the-way places we found; the taxidermy store in Paris, the monastery outside Munich, musty old London bookstalls.

Things happened. There were fistfights, fires, drugs, accidents, ar­rests, screaming matches, phones thrown at old friends and way too much press to face, day after day, bruises and all. It was not a pretty pic­ture. Couples paired off, or didn't . . . one couple married after that tour is still married; a driver I adored got sick and died not long after we left.

The challenge was to make it funny, and when I finally got home, I found that a lot of it was. But a lot of it wasn't, and I finally had to face it. After this tour, I knew that certain things were not for me, and that I had to make a choice. Could I continue to make a joyful noise when I was angry, ill and hungover? Some can, but I couldn't. My manager, Aaron Russo, and I broke up after a series of violent fights, and I had to live without the kind of support I had had for more than ten years. It's not an exaggeration to say that that tour changed my life.

So this book was a kind of last hurrah. When I read it, I hear a dis­armingly younger, sweeter voice, a character I adore, but whom I don't hear from much anymore. I loved her, and mourn her from time to time, like Márgarét on page 129.

By 1980, the '60s were finally over. The cloud of HIV/AIDS was about to descend on the blue-sky world I lived in, taking with it a whole generation of artists, performers and friends, including Jerry and Sean. I am not sure that this little confection captures a whole time, but I think it's an accurate picture of the spirit and tone of what I was doing in those days. I hope it holds up, and that you find your best younger self in it, as I do.

From A VIEW FROM A BROAD. Copyright 2014 by Bette Midler. Reprinted by permissions of Simon & Schuster, Inc., NY.