Joining a diverse group of visitors at the site of a former Nazi concentration camp, Polish-American academic Clements Olin performs research while witnessing personal and political tensions erupting among his fellow participants.

NPR stories about In Paradise 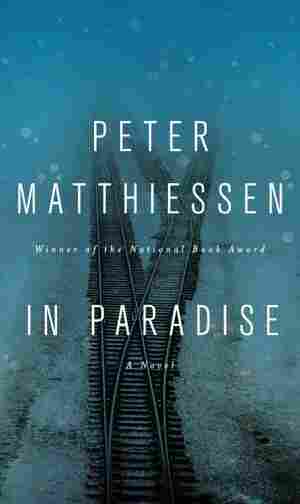 In 'Paradise,' Finding Understanding In The Ruins Of Horror

April 8, 2014 • The late Peter Matthiessen's last novel follows a fractious group of attendees at an Auschwitz memorial conference as they bear witness to one of history's greatest atrocities.

In 'Paradise,' Finding Understanding In The Ruins Of Horror

April 5, 2014 • At 86, Matthiessen has written what he says "may be his last word." In Paradise, a novel about a visit to a Nazi extermination camp, caps a career spanning six decades and 33 books.

He has flown all night over the ocean from the New World, descending from moon stare and the rigid stars into the murk and tumult of inversion shrouding winter Poland.

From the airport, a cab takes him to the city and sets him down in an empty square where a row of buses, closely parked, face a cracked wall; the cab is gone by the time he discovers they are locked. (The imprisoned air inside, he thinks, must be even colder than this outside weather.) At the corner café he is informed that buses to his destination won't be available before spring, and that he has missed the morning train he would have caught had he been driven to the depot; there will be no other until evening.

At a loss, he drinks black coffee at the counter, scowling at the unshaven traveler reflected in the dirty mirror. His antiquated Polish is eked out by the primitive English of a young couple who have overheard his inquiries about hiring a car and boisterously endorse the waiter's protest that the cost would be far too high. Concerned that a visitor to their fair land has been inconvenienced, they offer to es- cort him to the small museum he had mentioned: the waiter will keep an eye on his old suitcase. On the way he can admire the Royal Palace and cathedral on Wawel Hill and the St. Mary's Basilica destroyed in the thirteenth century by Asian Tatars and rebuilt in the fourteenth with that strange crowned tower. "Like black icicles!" the girl cries. Thus their guest can at least enjoy the historic center of Poland's oldest city, still so beautiful, they say, because Cracow, like Paris, had been spared bomb and fire in the war. Pardon? Oh no, sir, they giggle, they have never been to Paris!

Exhausted, he trails his merry guides past the medieval Cloth House on the Market Square. Mirek and his love-struck Wanda will not let him visit this city he knows more about than they do without dragging him into a shop to find a souvenir of Poland. Wanda supervises the selection of a silken lozenge of transparent amber. "For delight your sweetheart in America? Beauty gift for Mama?" This golden drop encasing flecks of ancient insects is the very essence of his native earth, yet its acquisition further sinks his spirits. He knows no one who would have much interest in this scrap of fossil tree sap, never mind "delight." He has no sweetheart, only a married lover he does not much miss — in fact, is rather glad to get a rest from — and no surviving family in the New World. Were they still alive, his father and paternal grandparents would have disapproved this trip, having always warned him against returning to this region of southwest Poland just because he happened to be born there. "You have no memory of that place, and our own memories are sad," his father said.

The one thing he will make sure he sees in Cracow is the Leonardo da Vinci portrait of a Renaissance girl holding a white winter weasel in her lap. Long ago, his father had shown him a faded reproduction clipped from an art magazine ("She reminds me so of your dear mother!"). Alas, on this cold Sunday of 1996, Young Woman with Ermine is locked away behind an obdurate wood door. His guides stare at the notice as if hoping that at any moment it might change its mind. Disappointed for their guest and sensing his annoyance, the poor things are looking a bit desperate.

On the return, in an effort to intrigue them, he relates how over the centuries this portrait of Cecilia Gallerani, Count Ludovico Sforza's adolescent mistress, had wandered in times of war and conquest — sealed up in castle cellars, stolen, sold, and finally recovered, only to be confiscated by Hans Frank, now Governor General of Occupied Poland, and displayed in his office in the Royal Palace —

"Is up there!" Eager to contribute, the girl is pointing at the fortress castle looming in the mist on its rock hill over the river. "We can visit!" shouts Mirek, eager, too.

Inside, they are shown the empty office where the Leonardo — and perhaps also a Raphael, never recovered — might have illumined these drab walls, doubtless vaunted as trophies, spoils of war, by hausfrau Brigitte Frank, she who styled herself "a Queen of Poland" as fit title for so grand a personage as the new lady of the Royal Palace. And perhaps it was this Nazi queen (said to have been detested by her husband) who had seen to the theft of "the Cecilia" in early 1945, when this awful family fled the Red Army rumbling across Poland from the east and installed her in their chalet in Bavaria, from where, eventually, she would be rescued by Allied soldiers rumbling across Poland from the west.

"I have always been a student of that period," he explains, embarrassed by their awe of so much knowledge. But as they make their way outside again into the city, he tells his rapt young friends that rather wonderfully, the masterpiece — one of but four known Leonardo portraits of women, including the Mona Lisa and La Belle Ferronnière, both in the Louvre — turned up in Paris and was eventually restored, thank God, to Cracow. "Thanks God!" the lovers agree fervently, at the same time confessing prior ignorance of its existence and also their amazement that a treasure so renowned might ever have been found anywhere in their battered land.

They head for the warmth of that café in Kasimierz, the old Jewish quarter named after King Kasimierz of the sixteenth century — a "Golden Age," he mentions, of benevolence toward Jews, who were fleeing to Poland from pogroms and persecutions all over Europe. However, his companions, though they nod and smile, cannot come up with any comment on all his information, which he'd hoped might stoke a faltering conversation. He tries to mend his pedantic tone but soon falls back on his research for want of a better antidote to their blithe ignorance, instructing them that in former times, their city was a cultural center of this country's Jewish population. After September 1939, when southwest Poland was seized by the Third Reich, the Jews were driven from their houses into a ghetto over near the river, permitting Obergruppenführer Frank to boast that Cracow was the first Judenfrei city in the Occupied Territory.

The girl looks at her companion. Judenfrei? What can he be telling us?

"But of course you know your own history much better than some foreigner who has never been here."

"Not even to Cracow?" the girl entreats him, hand circling to summon up its fabled spell. "But you are speak okay Polish," Mirek says, urging their guest to tell them more about this "Judenfrei": how amusing that in all their lives they have never met a single Jew, not one!

He watches them chortle at the idea of knowing Jews. "I suppose that's not so strange, under the circumstances," he says. "Very few survived the war and scarcely any have returned even today. Small wonder."

"Is small wonder!" Mirek agrees fervently. "Is small wonder!" the girl says. Uneasy, the lovers peer about them for some trace of missing Jews as if these buildings dark with centuries of soot were rife with Hebrew secrets.