Delving into his best-loved works, this glimpse into the life of the award-winning author, based on in-depth research and interviews, reveals a private person compelled to spill his secrets on the printed page. 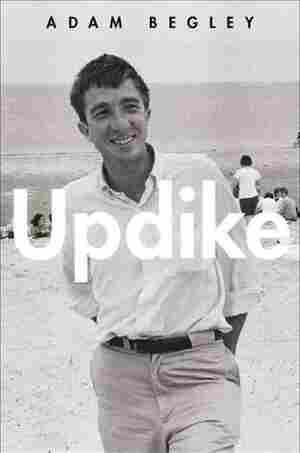 April 5, 2014 • Adam Begley says Updike created an everyman in his Rabbit book series, and inhabited him fully, "allowing that everyman's senses to be totally open to the American experience."

John began work as a reporter for The Talk of the Town on Monday, August 15, 1955. He was installed on the eighteenth floor, in a spartan cubicle equipped with a typewriter, a metal desk, a telephone, and a supply of freshly sharpened pencils. "It was all pretty monastic," according to Anthony Bailey, an Englishman a few months younger than Updike who started work as a Talk reporter in early 1956 and became his lifelong friend. "I found myself in an office right next door to him," said Bailey. "Ten o'clock was opening time, and I generally got there around ten-thirty. John would already be at his desk. You could hear his typewriter going — going from dawn to dusk, it seemed to me. It was very intimidating; his work rate was astonishing." (Actually, dawn was out of the question: always a late sleeper, Updike rarely reached the office before nine-thirty.) As astonishing as his work rate were the ease and rapidity with which he settled into his new environment. He was unhappy for a couple of weeks, mostly because he couldn't see how he would make time for his own writing, but by mid-September his misgivings had vanished. The job suited him perfectly. There was no period of adjustment, no apprenticeship; he appeared on the scene fully formed. Said Brendan Gill, who'd been at the magazine for two decades when Updike arrived, "He struck The New Yorker like an absolute bombshell." As Bailey put it, "John was the star." During the nineteen months he worked at the office, the magazine published more than three dozen of his Talk pieces (many of them classics of the genre), a half-dozen of his short stories, another half-dozen parodies, and a steady stream of light verse. The time he spent in the building working alongside the staff writers and getting to know the editors helped cement what would become the longest and most important professional association of his career.

"If ever a writer, a magazine and a time were made for each other, the writer was John Updike, the magazine was the New Yorker and the time was the 1950s." Ben Yagoda made that sweeping claim in About Town: The New Yorker and the World It Made, and it would be hard to refute. The American economy was ascendant, the magazine was ascendant, Updike was ascendant — and the confluence of these trends flattered all parties. Writing to Maxwell four decades later, Updike confessed that "ever since you accepted in one summer 'Duet, with Muffled Brake Drums' and 'Friends from Philadelphia,' I have been in a writerly bliss nothing could shake." Maxwell, as early as 1958, assured Updike, "It is a slightly different magazine because you are now published in it." (That may sound like faint praise, but The New Yorker has always been notoriously resistant to change; Updike had caused the mountain to move.) From the beginning, and sometimes to his chagrin, critics identified Updike as a typical New Yorker writer, as though he had been concocted in-house, the product of a singularly fruitful editorial meeting. Everything was going right for the magazine (from 1950 to 1964, circulation grew by 40 percent, ad pages by 70 percent, and prestige and influence by an unquantifiable yet unmistakable degree) — surely the sudden appearance of the wunderkind Updike was simply part of that fabulous chain of success.

To leaf through The New Yorker at midcentury was to celebrate a nation and a city triumphant. In that postwar moment, New York became the center of the world — " continuously insolent and alive," in Cyril Connolly's memorable phrase, the mighty beating heart of the most

powerful country on the globe. "The city," E. B. White rhapsodized in 1948, "is like poetry. . . . The island of Manhattan is without any doubt the greatest human concentrate on earth, the poem whose magic is comprehensible to millions of permanent residents but whose full meaning will always remain elusive." The New Yorker was both a gloss on that poem and a mirror reflecting its magic. Although it attracted a growing number of suburban and rural readers, not all of whom shared in the rising postwar prosperity, the message broadcast in its pages, in the advertisements as well as the short stories, casuals, columns, reported pieces, and reviews, was cosmopolitan, affluent, upwardly mobile. When Updike called to mind the typical New Yorker reader of the time, the words he used were "pampered and urban" — certainly the condition to which many aspired.

And yet these upwardly mobile middle-class readers were sensitive enough to have qualms about avid economic and social aspirations. The ads in the magazine — the vast majority of them hawking luxury goods — mostly pandered to naked snobbery and greed. Sometimes they challenged the consumer to be more "modern," or winked at the bad taste of others; occasionally they offered forthright instruction in the art of living. The content of the magazine inclined in somewhat different directions. The cartoons often gently mocked the conspicuous consumption of the rich, and sometimes even cast an eye over the precincts of the poor. In the writing, lowlifes came in for much scrutiny, notably in profiles by A. J. Liebling and Joseph Mitchell. The magazine had a well-developed social conscience, and played, at times, the role of crusader, exposing national and international wrongs — this was the magazine that devoted the entire editorial space of a sixty-eight-page issue, just a year after the United States dropped two atomic bombs on Japan, to John Hersey's "Hiroshima." Seduced by ads for jewelry and perfume, liquor and furs, but braced by the probity of the editorial content, New Yorker readers could allow themselves to feel slightly superior to the grasping multitudes. They were consumers, too — but they consumed tastefully, conscientiously. They belonged, or wanted to belong, to an elite club, a meritocratic aristocracy, and liked to think of the magazine as an island of civilization, a virtual community of the bien-pensant. (All clubs, as Updike remarked of the Lampoon, feed off "the delicious immensity of the excluded.") A 1946 New Yorker marketing pamphlet boasted that its readers were "at least all of the following: Intelligent, well-educated, discriminating, well-informed, unprejudiced, public-spirited, metropolitan-minded, broad-visioned and quietly liberal." Who wouldn't want to join such an enlightened crew?

It's important to remember that when he fell in love with it, The New Yorker, though ascendant, was hardly the only game in town, as it would be just a few decades later. An aspiring writer might more plausibly have set his or her eyes on Life or The Saturday Evening Post or Collier's or Cosmopolitan — all of which could claim a much wider circulation, and paid much higher fees to freelancers. By comparison, The New Yorker was still a small magazine. But it spoke to Updike in irresistible, seductive tones. As a thirteen-year-old, he had been ready to reshape himself radically so that he could literally

merge with it: "I loved that magazine so much I concentrated all my wishing into an effort to make myself small and inky and intense enough to be received into its pages." Reporting for work at age twenty-three, he was still desperately eager to be received into its pages — but less willing to transform himself and his writing to achieve that end. In the marketing department's

crowing checklist of New Yorker qualities, there was at least one that didn't exactly suit the young man from Berks County: "metropolitan-minded."

Otherwise, yes: Updike and The New Yorker in the fifties — it was indeed a perfect fit. Yagoda wisely refrained from stretching his claim to include New York City itself. Despite his adolescent fantasies of escaping Plowville for the glittering metropolis, epicenter of sophistication, Updike and the City of New York were not, in fact, made for each other. When he arrived in town, the possibility of becoming a New York writer was still open to him. In theory, he could have chosen urban life as his great subject and embraced the bustling literary scene as a natural habitat (the way, for example, Norman Mailer and Harold Brodkey did at about the same time). Instead, less than two years after he arrived, Updike retreated to Ipswich, Massachusetts, and he made New England his home for the rest of his life. His urban stint did play an important part in shaping both his writing and his idea of himself, but mostly in a negative sense. Turning his back on the splendors of midcentury Manhattan, he elected to leave. He would not be a New York writer, and New York would not be his subject.