The fifth collection by Lydia Davis,Can't and Won't includes pithy one-liners, exploratory observations and letters of complaint, including "A Small Story About a Small Box of Chocolates," in which a professor is stymied by her choices.

NPR stories about Can't and Won't 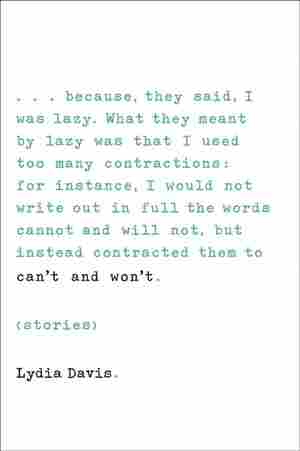 May 13, 2014 • Reading a story by Lydia Davis is like watching a magic trick: She shows you a top hat that's obviously empty, and then she pulls out of it something enormous and oddly shaped.

April 6, 2014 • The award-winning author is known for her brevity, and Can't And Won't doesn't disappoint. Davis tells NPR's Rachel Martin that the works of Russell Edson inspired her to write super-short stories. 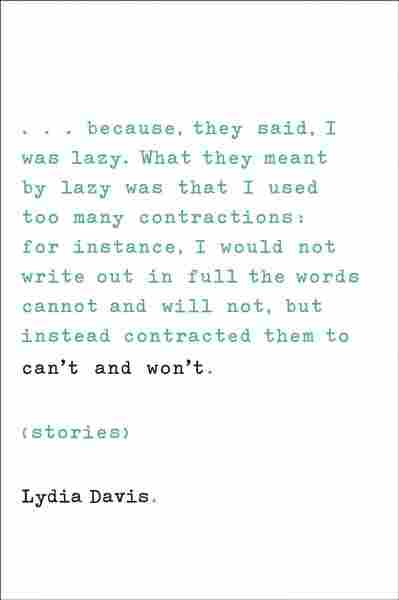 A Story of Stolen Salamis
My son's Italian landlord in Brooklyn kept a shed out back in which he cured and smoked salamis. One night, in the midst of a wave of petty vandalism and theft, the shed was broken into and the salamis were taken. My son talked to his landlord about it the next day, commiserating over the vanished sausages. The landlord was resigned and philosophical, but corrected him: "They were not sausages. They were salamis." Then the incident was written up in one of the city's more prominent magazines as an amusing and colorful urban incident. In the article, the reporter called the stolen goods "sausages." My son showed the article to his landlord, who hadn't known about it. The landlord was interested and pleased that the magazine had seen fit to report the incident, but he added: "They weren't sausages. They were salamis."

The Dog Hair
The dog is gone. We miss him. When the doorbell rings, no one barks. When we come home late, there is no one waiting for us. We still find his white hairs here and there around the house and on our clothes. We pick them up. We should throw them away. But they are all we have left of him. We don't throw them away. We have a wild hope — if only we collect enough of them, we will be able to put the dog back together again.

Idea for a Sign
At the start of a train trip, people search for a good seat, and some of them take a careful look at the people nearby who have already chosen their seats, to see if they will make good neighbors.

It might help if we each wore a little sign saying in what ways we will and will not be likely to disturb other passengers, such as: Will not talk on cell phone; will not eat smelly food.

Included in mine would be: Will not talk on cell phone at all, aside from perhaps a short communication to my husband at the beginning of the trip home, summarizing my visit in the city, or, more rarely, a quick warning to a friend on the way down that I will be late; but will recline my seat back as far as it will go, for most of the trip, except when I am eating my lunch or snack; may in fact be adjusting it slightly, back and up, from time to time throughout the trip; will sooner or later eat something, usually a sandwich, sometimes a salad or a container of rice pudding, actually two containers of rice pudding, though small ones; sandwich, almost always Swiss cheese, with in fact very little cheese, just a single slice, and lettuce and tomato, will not be noticeably smelly, at least as far as I can tell; am as tidy as I can be with the salad, but eating salad with a plastic fork is awkward and difficult; am tidy with the rice pudding, taking small bites, though when I remove the sealed top of the container it can make a loud ripping noise for just a moment; may keep unscrewing the top of my water bottle and taking a drink of water, especially while eating my sandwich and about one hour afterwards; may be more restless than some other passengers, and may clean my hands several times during the trip with a small bottle of hand sanitizer, sometimes using hand lotion afterwards, which involves reaching into my purse, taking out a small toiletries bag, unzipping it, and, when finished, zipping it up again and returning it to my purse; but may also sit perfectly quietly for a few minutes or longer staring out the window; may do nothing but read a book through most of the trip, except for one walk down the aisle to the restroom and back to my seat; but, on another day, may put the book down every few minutes, take a small notebook out of my purse, remove the rubber band from around it, and make a note in the notebook; or, when reading through a back issue of a literary magazine, may rip pages out in order to save them, though I will try to do this only when train is stopped at a station; lastly, after a day in the city, may untie my shoelaces and slip my shoes off for part of the trip, especially if the shoes are not very comfortable, then resting my bare feet on top of my shoes rather than directly on the floor, or, very rarely, may remove shoes and put on slippers, if I have a pair with me, keeping them on until I have nearly reached my destination; but feet are quite clean and toenails have a nice dark red polish on them.