Accessibility links
Year of No Sugar NPR coverage of Year of No Sugar: A Memoir by Eve O. Schaub and David Gillespie. News, author interviews, critics' picks and more.

Year of No Sugar

Year of No Sugar

Chronicles the author and her family's twelve-month no-sugar experiment and the positive results it yielded, shedding new light on oft-followed nutritional advice while offering tips on shopping for items with less and no added sugar.

NPR stories about Year of No Sugar 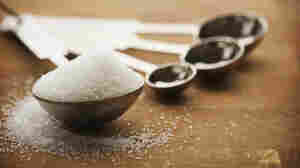 A new memoir highlights the experience of a family going without sugar for an entire year. iStockphoto hide caption

April 11, 2014 • Is banning sugar from your home to chronicle the effects on your family a gimmick veiled in a health halo? Actually, there's a lot to learn from a memoir of obsessive label-reading and weird baking.

Excerpt: 'Year Of No Sugar' 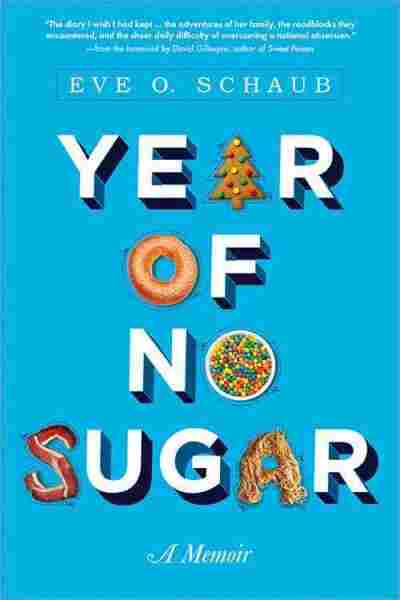 Sugar and me? We go way back.

I love sugar. LOOOOVVVVVE it. I love everything about it: how it makes little occasions special and special occasions fabulous. How it performs hot, bubbling magic on sour fruits, like rhubarb and gooseberries, to make the most succulent, mind-blowing pies and jams. How it crunches with perfect granulation in the best cookies and how a single cube of it adds fairy-tale perfection to a real Italian cappuccino.

And don't even get me started on chocolate.

I've known about the power of sugar for a long time. When I was in seventh grade, we were given an English-class assignment: create a "how-to" presentation on a subject of our choosing. Although I was awkward, painfully shy, and terrified to stand before the class, I still knew exactly what I wanted to do: a demonstration of different methods of cake decorating using a standard two-layer I had baked as a prop. Easy peasy.

The day of our presentations arrived, and I was petrified but excited-after all, I thought, how could I go wrong with a topic like cake? Then it came to be my turn and I, decked out in my best Esprit sweatshirt and ribbon barrettes, proceeded to inform the class how they could make their cakes more beautiful and interesting, which I'm sure had my preadolescent classmates simply riveted. This was 1982, mind you, before Martha Stewart did for homemaking what Edward Cullen did for being alarmingly pale. Making cakes and cookies wasn't even remotely cool; it was what grannies did when they weren't crocheting throw blankets in shades of mustard and avocado.

Nonetheless, everything seemed to be going along fairly well until I got to the part about making designs in the frosting using the tines of a fork. After chocolate shavings and shaking powdered sugar through a doily, this was pretty much my Big Finish. It was then that I realized-with horror-that I had Forgotten. The. Fork.

This was one in a series of moments in seventh grade when I fervently wished I had a shell in which to curl up and disappear, but lacking that, I instead turned a lovely shade of beet and attempted to mime the fork part. Worse public speaking debacles have happened, I imagine, but you couldn't have convinced me of that then.

However, despite the Fork Faux Pas and my appalling lack of public speaking skills, all was not lost. My English teacher liked the speech, but she loved the cake. I have a distinct memory of her pink, round face beaming as we all dug into our slices. I received what was in all likelihood a wholly undeserved A. That was proof enough for me in the power of sweet.

As far back as I can remember, I've always loved to bake. Once, when I was perhaps seven or eight years old, I created a carefully hand-lettered menu and invited everyone in the family to my "restaurant." Forensic analysis of that menu now reveals that I let Mom worry about the incidental entree of steak and baked potato (yeah, whatever), while I focused on what was really important: apple cobbler for dessert. The menu even featured a fanciful illustration of the pièce de résistance on the cover. As far as I was concerned, I had made dinner.

Like most kids, I knew dessert was something special, something magical. Every once in a while, my mother would handily transform a pile of fruit into a pie, handing us down the pastry scraps, which my brother and I would roll into little balls and eat raw while we climbed trees in the backyard. I pined for an Easy-Bake Oven in which to make my very own magical concoctions, but sadly, Santa ignored my culinary aspirations (also, my request for a Barbie Styling Head and Wonder Woman Underoos). So I pestered my mom to let me use the real oven until she finally relented.

I made box cakes from the time I could reach the kitchen counter. I remember my shock the first time flour exploded high into the air because I turned the mixer on too high, too fast; my cavernous disappointment the first time I tried to make a recipe without a key ingredient (baking powder, perhaps? I mean, how important could that half a teaspoon really be?), and it came out like warmed-over mud.

Still, I would bake at the drop of a hat-for our family, for the neighbor, for the neighbor's dog, for anyone. Everyone always loved it when I baked, with the possible exception of Mom, who patiently cleaned up after me. After all, who doesn't like dessert? Dessert to me was, and is, an ultimate expression of love-it is beyond a meal; it is beyond sustenance. It is something extra, something special that is made because someone simply wanted you to have it... More than being fed, they wanted you to be happy. I made the connection at an early age that sugar is the food equivalent of love.

I also learned that the withholding of sugar is a mighty punishment. Once, when we had a rather unobservant babysitter, I had the idea to bring a pocketful of the sparkly doodads from Mom's jewelry box to the playground and use them to decorate my sandbox creations. Of course, once I ran off distractedly to play elsewhere, the jewelry disappeared, and suddenly I found myself in big, huge, ENORMOUS trouble.

Abject, tear-stained, I waited like an inmate for my sentence. At last it came down from the powers that be: no dessert. For a month.

This may not sound like much to you, but believe me, it was the most effective punishment they could possibly have dreamed up. I was open-mouth horrified. A month? That was like, forever. I might expire first. Couldn't they just cane me instead?

But watching my family eat the occasional Entenmann's slice of yellow-sheet-cake-with-the-frosting-that-comes-right-off-in-one-piece wasn't the worst part. The worst part was that this, this was the month of a very special event: the Indian Princess Make-Your-Own-Sundae Party.

I had never been to a Make-Your-Own-Ice-Cream-Sundae Party, but at that time, it only sounded to me like the Best Thing in the Whole World. I was more than horrified;I was in shock. "Indian Princesses" was a YMCA-sponsored activity (and, obviously, a pre-politically correct era one at that). It was not unlike Brownies or Girl Scouts in that there were lots of craft projects and we marched together in local parades. But the main idea of Indian Princesses was that it was a father-daughter bonding activity, so I knew it was Dad who would be taking me. Would he break down? I wondered. Wouldn't he cave just a little at the sight of so much potential happiness just beyond his adorable little Indian Princess's reach?

The answer to that, actually, was no. Although my dad is known to be a bit of a softy, I'm guessing my mother prepped him in advance: no dessert means...No. Dessert. End of story. I sat and watched all my friends and their dads pile bowls high with what seemed to me at the time to be just about the most delicious combination of ingredients I had ever witnessed-not just ice cream and sprinkles, but M&M's, hot fudge and butterscotch, even whipped cream from a can! ARRRGGH!!!!!!! I was in Hell.

Let me just tell you, I never touched my mother's things again. Ever.

Since then, a lot of time has passed; over my teenage, college, and early adult years, I continued to bake and even became interested in actual meal cooking as well. No one I knew in college seemed quite as interested in these things as I was. Most everyone I knew was content to be spoon-fed whatever was trucked in to the myriad dining halls we had on campus. I insisted on going off the meal plan and doing my own food experimenting in the dorm mini-kitchen across the hall. While my floor-mates were discovering Jell-O shots or arguing over their Dungeons and Dragons powers, I was making hummus in my room, buying bulk quinoa at the co-op downtown, and trying to figure out how to devein shrimp on top of my bedspread. When the apple pie I had baked from scratch for a friend's birthday was stolen from the communal fridge, I was beside myself. Stolen!! Pie tin and all-gone! Pinching money I could almost understand, but food? Dessert? A birthday dessert!?! Did these barbarians have no humanity?

Of course they didn't. We were talking about young adults whose idea of gourmet cuisine was mozzarella sticks from the Hot Truck. From an early age, I was long out of step with my peers when it came to my passion for food.

At the same time, I've been extremely lucky in life never to be in real need of losing weight, so food fads have come and gone without my feeling the need to pay much mind. The Low-Carb Diet, the Low-Fat Diet, the Atkins Diet, the South Beach Diet, the Blood Type Diet, the Eat All the Liver and Pistachios You Want Diet...I ignored them all. The only one that grabbed my attention in the late nineties was the popular Sugar Busters diet, which dictated that followers give up refined sugar and white flour.

"Why not just give up eating!?!" I would scoff to myself whenever an acquaintance would profess to have lost "a ton" of weight on Sugar Busters. I was annoyed. I was offended at the suggestion that cakes and pies-my cakes, my pies-made from scratch, with love, could be harmful. Harmful! "This is all going too far. What, are we never supposed to have fun anymore?"

Seriously. What harm could possibly be done by enjoying dessert?