How the Overuse of Antibiotics Is Fueling Our Modern Plagues

Martin Blaser takes us to the front lines of cutting-edge research into the adverse effects of antibiotics on our bodies and the possible extinction of our irreplaceable microbes due to our most revered medical advances. 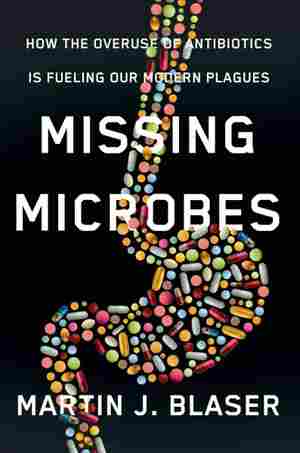 Modern Medicine May Not Be Doing Your Microbiome Any Favors

April 14, 2014 • In Missing Microbes, Dr. Martin Blaser argues that the overuse of antibiotics, as well as now-common practices like C-sections, may be messing with gut microbes.

Modern Medicine May Not Be Doing Your Microbiome Any Favors

I never knew two of my father's sisters. In the little town where they were born, early in the last century, they didn't see their second birthdays. They had high fevers, and I am not sure what else. The situation was so dire that my grandfather went to the prayer house and changed his daughters' names to fool the angel of death. He did this for each girl. It did no good.

In 1850, one in four American babies died before his or her first birthday. Lethal epidemics swept through crowded cities, as people were packed into dark, dirty rooms with fetid air and no running water. Familiar scourges included cholera, pneumonia, scarlet fever, diphtheria, whooping cough, tuberculosis, and smallpox.

Today, only six in every thousand infants in the United States are expected to die before age one — a remarkable improvement. Over the past century and a half, our nation and other countries in the developed world have been getting healthier. Chalk it up to improved sanitation, rat control, clean drinking water, pasteurized milk, childhood vaccinations, modern medical procedures including anesthesia, and, of course, nearly seventy years of antibiotics.

In today's world, children grow up without the deformed bones caused by lack of vitamin D or "cloudy" sinuses from infections. Nearly all women survive childbirth. Eighty-year-olds, once consigned to the veranda, are swatting tennis balls, often with the help of a metal hip joint.

Yet recently, just within the past few decades, amid all of these medical advances, something has gone terribly wrong. In many different ways we appear to be getting sicker. You can see the headlines every day. We are suffering from a mysterious array of what I call "modern plagues": obesity, childhood diabetes, asthma, hay fever, food allergies, esophageal reflux and cancer, celiac disease, Crohn's disease, ulcerative colitis, autism, eczema. In all likelihood you or someone in your family or someone you know is afflicted. Unlike most lethal plagues of the past that struck relatively fast and hard, these are chronic conditions that diminish and degrade their victims' quality of life for decades.

The most visible of these plagues is obesity, defined in terms of the body mass index (BMI), which expresses the relationship between a person's height and weight. People of healthy weight have a BMI between 20 and 25. Those whose BMI is between 25 and 30 are overweight. Everyone with a BMI over 30 is obese. Barack Obama has a BMI of about 23. The BMIs of most U.S. presidents have been under 27, except for that of William Howard Taft, who once got stuck in the White House bathtub. He had a BMI of 42.

In 1990, about 12 percent of Americans were obese. By 2010, the national average was above 30 percent. Next time you go to an airport terminal, supermarket, or mall, look around and see for yourself. The obesity epidemic is not just a U.S. problem; it's global. As of 2008, according to the World Health Organization (WHO), 1.5 billion adults were overweight; of these, over 200 million men and nearly 300 million women qualified as obese. Many of these people live in developing countries that we associate more with famine than with overeating.

These figures are alarming, but the really shocking fact is that this accumulation of global human body fat has been accelerating not over the course of a few centuries but in a mere two decades. Yet fat- and sugar-rich foods, so often blamed for all the extra pounds, have been ubiquitous for a good deal longer than that, at least in the developed world, and the new generations of overweight people in the third world have not suddenly adopted a Kentucky-fried American-style diet. Epidemiologic studies have shown that high caloric intake, while definitely not helpful, is not sufficient to explain the distribution or course of the worldwide obesity epidemic.

At the same time, the autoimmune form of diabetes that begins in childhood and requires insulin injections (juvenile or Type 1 diabetes) has been doubling in incidence about every twenty years across the industrialized world. In Finland, where record keeping is meticulous, the incidence has risen 550 percent since 1950. This increase is not because we are detecting Type 1 diabetes more readily. Before insulin was discovered in the 1920s, the disease was always fatal. Nowadays, with adequate treatment, most children survive. But the disease itself has not changed; something in us has changed. Type 1 diabetes is also striking younger children. The average age of diagnosis used to be about nine. Now it is around six, and some children are becoming diabetic when they are three.

The recent rise in asthma, a chronic inflammation of the airways, is similarly alarming. One in twelve people (about 25 million or 8 percent of the U.S. population) had asthma in 2009, compared with one in fourteen a decade earlier. Ten percent of American children suffer wheezing, breathlessness, chest tightness, and coughing; black children have it worst: one in six has the disease. Their rate increased by 50 percent from 2001 through 2009. But the rise in asthma has not spared any ethnicity; the rates were initially different in various groups, and all have been rising.

Asthma is often triggered by something in the environment such as tobacco smoke, mold, air pollution, cockroach leavings, colds, and flu. Once an attack begins, asthmatics gasp for air and, without quick medication, are rushed to emergency rooms. Even with the best care, they can die, as did the son of a physician colleague. No economic or social class has been spared.

Food allergies are everywhere. A generation ago, peanut allergies were extremely rare. Now, if you stroll through any preschool, you will see walls plastered with "nut-free zone" bulletins. More and more children suffer immune responses to proteins in foods, not just in nuts but in milk, eggs, soy, fish, fruits — you name it, someone is allergic to it. Celiac disease, an allergy to gluten, the main protein in wheat flour, is rampant. Ten percent of children suffer from hay fever. Eczema, a chronic skin inflammation, affects more than 15 percent of children and 2 percent of adults in the United States. In industrialized nations, the number of kids with eczema has tripled in the past thirty years.

These disorders suggest that our children are experiencing levels of immune dysfunction never seen before, as well as conditions such as autism, a much discussed and debated modern plague that is a focus of my laboratory. Nor are adults escaping their own share of modern plagues. The incidence of inflammatory bowel disease, including Crohn's and ulcerative colitis, is rising, wherever we look.

When I was a medical student, esophageal reflux, which causes heartburn, was uncommon. But the ailment has exploded in these past forty years, and the cancer it leads to, adenocarcinoma of the esophagus, is the most rapidly increasing cancer in the United States and everywhere else it has been tracked, and is a particularly nasty problem for Caucasian men.