The first volume of a series detailing the life and work of the influential political advocate draws on private papers and other untapped sources to cover his birth in 1869 through his upbringing in Gujarat, discussing his London education and decades asa lawyer in South Africa.

NPR stories about Gandhi Before India 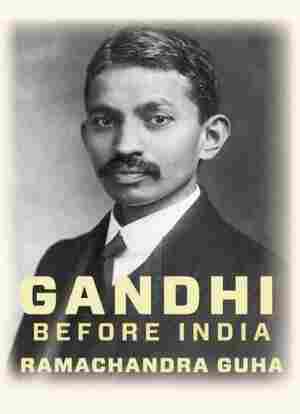 April 16, 2014 • The racism Gandhi encountered in South Africa helped spark a lifetime of activism. Historian Ramachandra Guha says without that experience, "he would never have become a political animal."

I might never have written this book had I not spent the spring term of 1998 at the University of California at Berkeley. The university had asked me to teach a course on the history of environmentalism, till then the chief focus of my research and writing. But I was tired with the subject; I suggested that I instead run a seminar called 'Arguments with Gandhi.'

At the time, Gandhi's vision of an inclusive, tolerant India was being threatened from both ends of the political spectrum. From the right, a coalition of Hindu organizations (known as the Sangh Parivar) aggressively pushed for a theocratic state, a project Gandhi had opposed all his life. On the left, a growing Maoist insurgency rejected non-violent methods of bringing about social change. To show their contempt for the 'Father of the Nation,' Maoists demolished statues of Gandhi across eastern India.

Despite these attacks from political extremists, Gandhi's ideas survived. They were given symbolic — but only symbolic — support by the Government of India, and more emphatically asserted by social workers and activists. The course I wished to teach would focus on Gandhi's contentious legacy. However, my hosts in Berkeley were unhappy with my proposal. They knew that my contribution to Gandhian studies was close to nil, whereas a course on environmentalism would always be popular in California, a state populated by energy entrepreneurs and tree-huggers. The university worried that a seminar on Gandhi would attract only a few students of Indian origin in search of their roots, the so-called 'America Born Confused Desis' or ABCDs.

Finally, after many letters back and forth, I was permitted to teach the course on Gandhi. But within me there was a nagging nervousness. What if my counsellors were correct and only a handful of students showed up, all Indian- Americans? On the long flight to the West Coast I could think of little else. I reached San Francisco on a Saturday; my class was due to meet for the first time the following Wednesday. On Sunday I took a walk down Berkeley's celebrated Telegraph Avenue. On a street corner I was handed a free copy of a local weekly. When I returned to my apartment I began to read it. Turning the pages, I came across an advertisement for a photo studio. It said, in large letters: 'ONLY GANDHI KNOWS MORE THAN US ABOUT FAST '. Below, in smaller type, the ad explained that the studio could deliver prints in ten minutes, in those pre-digital days no mean achievement. I was charmed, and relieved. A Bay Area weekly expected its audience to know enough about Gandhi to pun on the word 'fast.'

My fears were assuaged, to be comprehensively put to rest later that week, when a full classroom turned out to meet me. Thirty students stayed the distance. And only four of them were Indian by birth or descent. Among my students was a Burmese girl who had fled into exile after the crushing of the democracy movement, a Jewish girl whose twin guiding stars were Gandhi and the Zionist philosopher Martin Buber, and an African- American who hoped the course would allow him to finally choose between Malcolm X and Martin Luther King Jr. There was also a Japanese boy, and plenty of Caucasians. In the class and in the papers they wrote, the students took the arguments with Gandhi in all kinds of directions, some of them wholly unanticipated by the instructor.

The course turned out to be the most enjoyable I have ever taught. This, I realized, was almost entirely due to my choice of subject. How many students in Berkeley would have enrolled for a course called 'Arguments with De Gaulle'? And if an American historian came to the University of Delhi and proposed a course entitled 'Arguments with Roosevelt', would there have been any takers at all? Roosevelt, Churchill, De Gaulle — these are all great national leaders, whose appeal steadily diminishes the further one strays from their nations' boundaries. Of all modern politicians and statesmen, only Gandhi is an authentically global figure.

What accounts for Gandhi's unique status? He worked in three different countries (and continents): Britain, South Africa and India. Anticolonial agitator, social reformer, religious thinker and prophet, he brought to the most violent of centuries a form of protest that was based on non- violence. In between political campaigns he experimented with the abolition of untouchability and the revival of handicrafts. A devout Hindu himself, he had a strong interest in other religious traditions. His warnings about individual greed and the amorality of modern technology, seemingly reactionary at the time, have come back into fashion as a result of the environmental debate.

Educated in Victorian England, making his name in racialist South Africa, Gandhi's life and work are writ large against the history (and geography) of his time. The years of his most intense political activity witnessed the rise of Bolshevism, the rise (and fall) of fascism, the two World Wars, and the growth of anti- colonial movements in Asia and Africa. While Gandhi was leading a mass movement based on non-violence in India, Mao Zedong was initiating a successful violent revolution in China.

To both scholar and lay person, Gandhi is made the more interesting by his apparent inconsistencies. Sometimes he behaved like an unworldly saint, at other times like a consummate politician. Asked by a British journalist what he thought of modern civilization, he answered: 'I think it would be a good idea.' Yet this foe of the West acknowledged three white men – Henry Salt, John Ruskin and Leo Tolstoy — among his mentors. This rebel who called the British Empire 'satanic' wept when London (a city he knew and loved) was bombed during the Second World War. And this celebrated practitioner of non- violence actually recruited Indians to serve in the First World War.