Revealing unconventional ways of going about the artistic endeavor, a master of the impossible, known for his 1974 walk between the Twin Towers of the World Trade Center, shares insights for tackling the challenges and possibilities of everyday life. 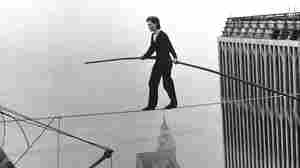 May 11, 2014 • Performer Philippe Petit, who walked between the World Trade Center towers in 1974, says the difference between the average criminal and an artistic one is that the former takes and the latter gives.

I frown upon books about creativity.

Too often they gather only formulas, point at Einstein and the Beatles but rarely at the author, propose exercises that mistake the mind for a gym machine and conclude each chapter with a recap worthy of fifth-graders. In aiming at the universal — to satisfy the commonest denominator of human thinking and behavior — most of these books miss all of the originality, the humor, the serendipity, the grace, the exceptions to the rule, the idiosyncrasies that mold the way of art.

So if I don't believe in books about creativity, why am I writing one? Although the original idea for this book was not mine — it came from the outside — its entire content comes directly from inside, from a life I have spent creating. I hope that my unconventional, insubordinate process of creativity will offer insight for anyone struggling to achieve his or her dreams.

Born into the confines of rigid parenting, repressive schooling and the narrow-mindedness of a country busy manufacturing 365 types of cheeses, quite early I started to rebel against authority. I was not very good at following. I had to distance myself from the norm, to venture along solitary paths, to teach myself.

At six, I taught myself magic; at fourteen, juggling; at sixteen, wire-walking. In the process, I was thrown out of five different schools. Regardless, I would never have let my schooling get in the way of my education.

Observation was my conduit to knowledge, intuition my source of power.

I spent my days taking things apart and rebuilding them; not asking how to do something, but finding out; hiding from people in order to stare at them, noting how they dress, talk, act, and noticing their mistakes . . .

As a teenager I spent considerable time at the circus and vaudeville theater, witnessing the best acts in the world — thereby setting my artistic standards at an unusually high level. I would compare the overall effect different performances had on me and decide who was the best dancer, the best ventriloquist, the best stand-up comic. I would try on their styles and attempt their routines. Ha-ha! Yet trial and error provided results.

All of this trying and failing and watching and trying again bred in me an arrogant, proud and aggressive determination. Each discovery, no matter how naive, had to be jealously hidden from the rest of the world. Each victory felt like a stolen jewel. I fell into a natural state of intellectual self-defense. Let me explain.

Always trying my best, I became guilty of pursuing perfection — imagine that!

Always working relentlessly, I became obstinate — and almost felt guilty about it.

To protect what triggered my creativity, I became secretive.

Anxious about being discovered, fearful of being caught, I ended up always on the lookout.

At the outset of most projects, busy battling against overwhelming odds, I

came to believe the entire world was against me.

be at my most creative. It coated my character with an outlaw sheen. And

I'm sure that with my constant sneaking, my tiptoeing, my way of approaching people inconspicuously from behind to spy on them or surprise them, I must have looked like a criminal, and certainly others must have felt I was one. And so I was not surprised the world around me reacted with suspicion and mistrust!

Before I had reached eighteen, I had rewritten the Book of Ethics that had been forced on me earlier, and before I knew it, I had acquired the mind of a criminal.

My attitude as an artist grew out of the realization I'd arrived at from an early age: that my intellectual engagement, my imaginative freedom, had a price, that of the forbidden. Whatever I decided to do, it was not allowed! "Creativity is illegal" became my byword.

The creator must be an outlaw.

Not a criminal outlaw, but rather a poet who cultivates intellectual rebellion. The difference between a bank job and an illegal high-wire walk is para- mount: the aerial crossing does not steal anything; it offers an ephemeral gift, one that delights and inspires.

Despite my outlaw approach — or because of it — a network of personal creative principles imperceptibly emerged. Lawlessness doesn't mean lack of method: in fact, the outlaw I became needed method all the more, because I was swimming alone to the island of my dreams.