Accessibility links
The Good Doctor NPR coverage of The Good Doctor: A Father, a Son, and the Evolution of Medical Ethics by Barron H. Lerner. News, author interviews, critics' picks and more.

A Father, a Son, and the Evolution of Medical Ethics

Title
The Good Doctor
Subtitle
A Father, a Son, and the Evolution of Medical Ethics
Author
Barron H. Lerner

Barron Lerner traces the disparate approaches to end-of-life care practiced by a father and son, and explores ongoing debates about patient suffering versus informed consent, analyzing how their respective views reflect polarized opinions about the powers of doctors and the influence of evolving medical technology.

NPR stories about The Good Doctor 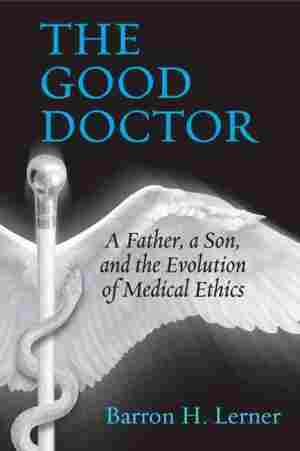 May 13, 2014 • In a new book, bioethicist and internist Barron Lerner recalls how he came to question some of his father's medical practices — practices that were common among many doctors of that generation.

My father's decision to become a physician stemmed from his upbringing in a close-knit, working-class Jewish community during World War II. Although he was largely unaware of the mass murder of Jews as it was occurring, what he learned later would affect many aspects of his medical world. His career trajectory was also greatly influenced by his attending a medical school that was in the forefront of efforts to train humanistic physicians. And he had an inspiring mentor who practiced a particular type of patient-centered, case-based medicine that hearkened back to the practices of some of America's greatest early doctors and reached its apogee in the mid-twentieth century.

As a historian, I was not surprised by what I read in my father's journals. After all, everyone is, to some degree, a product of his or her times. Yet as a doctor, I was amazed by much of what I read. Indeed, my dad's medical school training and early career would probably be unrecognizable to most modern physicians.

My father's story is typical for an American Jew of Ashkenazi descent whose family left Poland in the early twentieth century. Fortunately, my paternal great-grandfather, Ben Lerner, chose to immigrate to the United States as the century began. Realizing that the Jews of Poland would never belong and would never be able to live in peace, he left shortly before World War I, escaping the fate of most of the Jews of his village, Yanova: they died in the Holocaust. As was common then, he left his wife and children behind, hoping to get a foothold before sending for them. Over the years, first in Pittsburgh and then in Cleveland, Ben would work in a series of jobs, eventually running gas stations from dawn to dusk — "in good spirits," my father wrote, "because he knew what he had escaped." He was, my dad went on, a simple man with "basic values and resolve"; his favorite expression was "Hope for the best." The second-oldest child of Ben and his wife, Dora, was Meyer, my grandfather, who was born in Poland in 1907. Meyer's wife, my grandmother Pearl, was also born in Poland. Her family arrived in Cleveland in 1920. They met there in 1927 and married three years later.

Being Jewish in Cleveland at this time was all about religious commitment and unity. Both of my great-grandfathers on my father's side of the family, Ben and Chaim, belonged to the Mezricher Society, a Jewish club (or landsmanshaft, in Yiddish) that sponsored social events, helped welcome newcomers, and supplied cemetery plots. Chaim and his wife, Dina, were Orthodox Jews, following all the customs, such as not mixing milk and meat, not using electricity on the Sabbath, praying with phylacteries every day, and regularly going to synagogue. Ben and Dora Lerner were not as strict as Chaim and Dina, in part due to an incident in which Ben, a struggling peddler at the time, was turned away from High Holiday services at a temple because he could not afford a ticket. Thanks to Dora, however, they still observed most of the religious rituals. Yiddish was the mother tongue in both homes, although the families spoke more and more English over time.

By the 1920s, Cleveland's Jewish community had mostly congregated on the city's east side, in an area known as Glenville. The main thoroughfare was East 105th Street, which, one historian wrote, was "lined with Jewish bakeries, pharmacies, shops and important charitable and religious institutions." There were still peddlers with horse-drawn wagons. Life centered on the family. My father had eighteen first cousins, several of whom lived in a two-family house on Eddy Road that the Lerners shared with one of Pearl's sisters and her family. His cousins were his best friends, and with so many relatives living within a few blocks, informal socializing on the stoops of houses or in local playgrounds was the rule.

My grandfather Meyer worked steadily as a furrier during the 1930s and 1940s, despite the Great Depression and the deprivations of World War II. Although I always knew that these events had shaped my father's life, his journals revealed just how directly his family, class, and religion affected his eventual career choice. His parents expected him to earn money during high school, and he did. They also expected him to succeed in ways that they, as first generation immigrants from the working class, could not. College was an absolute certainty. During college, my dad worked in his father's fur shop as well as in the local butcher shop. In medical school, he drove a creaky electric trolley bus with straw mesh seats for the old Cleveland Transit System in some of the most dangerous parts of town. "Love of family, honesty and hard work," he wrote many years later, were the "common values of strong families in those days."

The fact that my dad was a diligent and enthusiastic student surely helped him achieve his goals. In later years, he would characterize his youth as mundane and his view of the world beyond Cleveland as completely naïve. Before visiting St. Louis, New York, Boston and other cities in 1958 at age twenty-five to interview for a medical residency, he had never been so far from home. The only real vacations that the family had taken were trips to Pittsburgh to see relatives. But his experiences in Cleveland, working hard to help support his family while also excelling in school, prepared him to move beyond the confines of his provincial upbringing.

He chose medicine as a career not only because it was a path to the middle class but also because of his experiences growing up Jewish in the 1930s and 1940s. He attended Glenville High School, a predominantly Jewish public school filled with second-generation-immigrant teenagers from working-class families with lofty aspirations. The informal name for Glenville students, the Tarblooders, came from a local tar company and reflected how hard these children were willing to work at school and sports in order to succeed. Brooklyn and the Grand Concourse in the Bronx are the repositories for memories of New York Jewish children coming of age in the mid-twentieth century, and Glenville and its high school serve the same role for Clevelanders. Still, after his Orthodox bar mitzvah, my father concluded that religion meant little to him. Mild-mannered Meyer, who took enormous pride in his sons' accomplishments, often let my dad and his younger brother, Allan, know that he was nonetheless disappointed that they had turned their backs on their faith.

Excerpted from The Good Doctor: A Father, A Son, and the Evolution of Medical Ethics by Barron H. Lerner, (Beacon Press, 2014). Reprinted with permission from Beacon Press.