Part travelogue, part social observation, this book presents an entertaining look at life aboard an American aircraft carrier and the military personnel who must adhere to a regimen defined by service and restraint.

NPR stories about Another Great Day at Sea 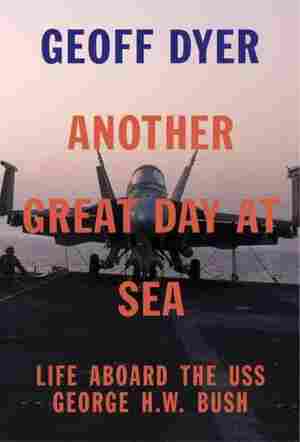 May 20, 2014 • Geoff Dyer's entertainingly cranky new book chronicles the two weeks he spent as a writer-in-residence aboard the USS George H.W. Bush, amid the buzzing activity of an aircraft carrier on the job.

Excerpt: Another Great Day At Sea 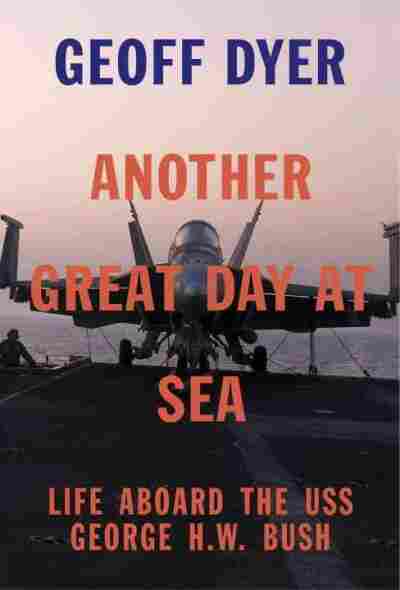 For the duration of my stay the carrier remained a three-dimensional maze of walkways, stairs and hatches but at some point we always ended up back in the hangar bay—the second most interesting place on the boat (after the flight deck). We passed through there straight after our tour of the kitchen and would do so later the same day, after dark, when it was illuminated by a pale yellow light (less visible from a distance). Now the Arabian sun was peeking through the open expanse of the elevator bay, eager to get a glimpse of whatever was going on in this outpost of industrial America.

Like a buffalo brought down by a lion who then summons the rest of her pride to tuck in, an F-18 was being pecked, prodded and taken apart by a gang of mechanics and engineers. They swarmed over it, drawing metallic entrails from the fuselage, digging into its cockpit and burrowing away in the bowels of the engine. They did this with the utmost care, many of them wearing the soft suede or chamois over-shoes I'd noticed earlier—the heavy industrial equivalent of carpet slippers—to prevent damage to the plane's delicate skin. The concern was reciprocated: little padded pouches were tied to the sharp edges of the plane's fins and wings so that heads were not gashed as people hurried by.

A brown-shirted woman was perched on the wing, cross-legged as if at a festival of future archaeology, concentrating closely on the all-important part she was unscrewing. Having taken the component out of the wing she was now coating it with some kind of grease, glue, anti-freeze, lube or whatever. I apologize for the discrepancy between the precision of the task and the imprecision of my description of that task. I have never liked anything that involves engines, oil or fiddly intricate work even though it is, in a way, in my blood. My dad served his apprenticeship and worked at Gloster Aircraft Company, where one of the first operational jet fighters, the Gloster Meteor, was built. Some days he and his workmates would eat lunch outside, munching their bread-rationed sandwiches, watching planes take off and fly around the shirey skies. (My parents were much on my mind while I was on the boat; my mum had died four months before I came on board; my dad would die, quite suddenly, three weeks after I got back.)

A couple of planes away a fuel cell bladder was being replaced. It looked like a cross between a black python and a massively deflated paddling pool. The work was being overseen by a civilian who, like almost all the civilians on the boat, was ex-military (a Vietnam vet from helicopters, search and rescue). If you met him in the street you would guess straightaway that he had been in the military: a directness, a strength (physical, yes, but also of purpose and identity), an instinct for straight talking that is manifest even when (especially when) silent. A young woman was curled up yoga-ishly on the wing of this plane too, replacing something. The fact that she was wearing a cranial and an oil-smeared brown jersey made her eyes even more luminous. I was glad to have an excuse to talk with her. She wiped her face with the back of her hand, as you do when your fingers are oily. It wasn't exactly a gender-reversal thing going on, but the essential choreography of the scene was being acted out in garages throughout the world: a woman being told what's wrong with her car, in terms barely comprehensible, by a swarthy grease monkey confident of his knowledge and not embarrassed about the oil-smudged pictures of chicks, mainly blonde, who provide a silent chorus of assent when the complexity of the repair and its estimated cost is eventually revealed. No pin-ups like that here, of course: less, I think, because the women on board might find such things offensive than because any man who even considered such forms of decoration would instantly feel like a total dick. A limp dick at that. It's striking how many of the world's little problems—and many of its big ones too—are eliminated by the simplest of solutions: having women around. Just over a fifth of the ship's company were women. Only men in senior positions were old enough to remember what it was like to have men-only boats. One of these explained to me that the main difference, after women came aboard, was 'that the boat smelled a bit nicer because the guys showered more.' Other than that, what surprised him was the speed with which resistance to the idea of gender integration was followed by two related and equally baffling questions: what had all the fuss been about—and why didn't we do this earlier?*

A stranger to the workplace, I needed only a short time on the boat to realize that the workplace—not pubs, parties or clubs—is the great breeding ground of crushes. Over the years I'd developed a strong idea of all the things about office life that I could not tolerate—like using a shared toilet—but it occurred to me now that I couldn't take the drain and strain of having crushes on my co-workers. One was spared that at home alone—but one was missing out on it too.

We chatted some more, me and the bright-eyed mechanic who, it turned out, was from Wyoming. ('Wyoming!' I trilled. 'Really?') It also turned out that another part of our meeting failed to conform to the usual woman-with-car-talking-to-manly-mechanic scenario. Namely that this mechanic had a husband at home who was an ex-Marine. Ah. And they had a four-year-old daughter. Her dad—the dad of the woman I was talking to, grandfather of the four-year-old—was a mechanic and she'd always wanted to be a mechanic herself. It was easy to imagine her as a teenage tomboy, able to mend punctures or tighten a climbing frame that had gone wonky. She was twenty-two now and, looking at her (which I had no desire not to do) I found it difficult to imagine anyone doing what they were doing more contentedly. I dismissed this as soon as I thought it, as soon as I looked around at everyone else, at all the other mechanics and engineers who were going about their business with such concentrated contentment. Even the people who weren't working were working out, on the exercise bikes or in one of the fitness classes which seemed a 24/7 feature of the hangar deck. Everywhere you looked, everyone was doing something, if not working on the planes then pushing or towing things on trolleys. It was like Whitman's 'Song for Occupations' in an entirely military setting (with a special emphasis on avionics): a vision of a fulfilled and industrious America, each person indispensable to the workings of the larger enterprise, no friction between the person and the task. Which made me think: why not name an aircraft carrier after Whitman? And why stop at Walt? Why not re-brand all the carriers and give them the names of poets? Show me one good reason why the USS Ronald Reagan shouldn't be called the USS Emily Dickinson.