How the Koch Brothers Became America's Most Powerful and Private Dynasty

Daniel Schulman follows the lives of the wealthy and powerful family that built one of the largest private corporations in the world, discussing their corporate, social, philosophical and political ambitions.

NPR stories about Sons of Wichita 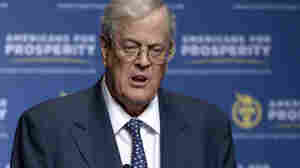 David Koch is one-half of politically and economically powerful duo known as the Koch brothers. He and his brother, Charles, are tied in sixth place on the list of the wealthiest men on the planet. Phelan M. Ebenhack/AP hide caption

May 21, 2014 • Charles and David Koch have spent hundreds of millions of dollars trying to bring their libertarian views into the mainstream. In a new book, Daniel Schulman looks at the roots of their ideology.

Morris eased the pickup truck to the side of the road. The wide, busy thoroughfares of 1950s Wichita, Kansas, were just five miles southwest, but here on the largely undeveloped outskirts of the city, near the Koch family's 160-acre property, the landscape consisted of little more than flat, sun-bleached fields, etched here and there by dusty rural byways. The retired Marine, rangy and middle-aged, climbed out of the truck holding two sets of scuffed leather boxing gloves.

"Okay, boys," he barked, "get outside and duke it out." David and Bill, the teenage Koch twins, were at each other's throats once again. Impossible to tell who or what had started it. But it seldom took much. The roots of the strife typically traced to some kind of competition — a game of hoops, a round of water polo in the family pool, a footrace. They were pathologically competitive, and David, a gifted athlete, often won. Everything seemed to come easier for him. Bill was just 19 minutes younger than his fraternal twin, but this solidified his role as the baby of the family. With a hair-trigger temper, he threw the tantrums to match.

David was more even-keeled than Bill, but he knew how to push his brother's buttons. Once they got into it, neither backed down. Arguments between the twins, who shared a small room, their beds within pinching range, transcended routine sibling rivalry. Morris kept their boxing gloves close at hand to keep them from seriously injuring each other when their tiffs escalated into full-scale brawls. The brothers' industrialist father had officially hired the ex-soldier to look after the grounds and livestock on the family's compound. But his responsibilities also included chauffeuring the twins to movies and school events, and refereeing the fights that broke out unpredictably on these outings.

Morris laced up one brother, then the other. The boys, both lean and tall, squared off, and when Morris stepped clear, they traded a barrage of punches. A few minutes later, Morris reclaimed the gloves and the brothers piled breathlessly into the cab. He slipped back behind the wheel and pulled out onto the road.

Pugilism was an enduring theme in the family. The patriarch, Fred Koch — a college boxer known for his fierce determination — spent the better part of his professional life warring against the dark forces of communism and the big oil companies that had tried to run him out of the refining business. As adults, Fred's four sons paired off in a brutal legal campaign over the business empire he bequeathed to them, a battle that "would make Dallas and Dynasty look like a playpen," as Bill once said.

The roles the brothers would play in that drama were established from boyhood. Fred and Mary Koch's oldest son, Frederick, a lover of theater and literature, left Wichita for boarding school after 7th grade and barely looked back. Charles, the rebellious No. 2, was molded from an early age as Fred's successor. After eight years at MIT and a consulting firm, Charles returned to Wichita to learn the intricacies of the family business. Together, he and David would build their father's Midwestern company, which as of 1967 had $250 million in yearly sales and 650 employees, into a corporate Goliath with $115 billion in annual revenue and a presence in 60 countries. Under their leadership, Koch Industries grew into the second-largest private corporation in the United States (only the Minneapolis-based agribusiness giant Cargill is bigger).

Bill, meanwhile, would become best known for his flamboyant escapades: as a collector of fine wines who embarked on a litigious crusade against counterfeit vino, as a playboy with a history of messy romantic entanglements, and as a yachtsman who won the America's Cup in 1992, an experience he likened, unforgettably, to the sensation of "10,000 orgasms." Koch Industries made its money the old-fashioned way — oil, chemicals, cattle, timber — and in its dizzying rise, David and Charles amassed fortunes estimated at $41 billion apiece, tying them for sixth place among the wealthiest people on the planet. (Bill ranks 377th on Forbes' list of the world's billionaires.) The company's products would come to touch everyone's lives, from the gas in our tanks and the steak on our forks to the paper towels in our pantries. But it preferred to operate quietly — in David's words, to be "the biggest company you've never heard of."

But if Charles and David's industrial empire stayed under the radar, their political efforts would not remain so private. After spending decades quietly trying to mainstream their libertarian views and remake the political landscape, they burst into the headlines as they took on the Obama administration and forged a power center in the Republican Party.

Politicians, as one of Charles' advisers once put it, are stage actors working off a script produced by the nation's intellectual class. Some of the intellectual seeds planted by the Kochs and their comrades would germinate into one of the past decade's most influential political movements: Though the intensely private brothers downplay any connection, they helped to provide the key financing and organizational support that allowed the tea party to blossom into a formidable force — one that paralyzed Congress and ignited a civil war within the GOP. After backing a constellation of conservatives, from Wisconsin Gov. Scott Walker to South Carolina's Jim DeMint, Charles and David mounted their most audacious political effort to date in the 2012 presidential campaign, when their fundraising network unleashed an estimated $400 million via a web of conservative advocacy groups.

Just as their father, a founding member of the John Birch Society, had once decried the country's descent toward communism during the Kennedy era, the brothers saw America veering toward socialism under President Obama. Charles, entering his late 70s, had not only failed to see American society transformed into his libertarian ideal; with this new administration, things seemed to be moving in the exact opposite direction. Now he and David, along with other allies, would wage what he described as the "mother of all wars" to defeat Obama and hand Republicans ironclad congressional majorities.

Yet for all the attention the Kochs — including the "other brothers," Frederick and Bill — have received, America knows little about who they really are. Charles and David have gained a reputation as cartoonish robber barons, powerful political puppeteers who with one hand choreographed the moves of Republican politicians and with the other commanded the tea party army. And like all caricatures, this one bears only a faint resemblance to reality.

As with America's other great dynasties, the Kochs' legacy (corporate, philanthropic, political, cultural) is far more expansive than most people realize, and it will be felt long into the future. Already, the four brothers have become some of the most influential, celebrated, and despised members of their generation. Understanding what shaped them, what drove them, and what set them upon one another requires traveling back to a time when the battles involved little more than a pair of boxing gloves.