The Deep History of the Human Body

Traces the unique qualities of the human species to astronomical events that occurred billions of years ago, revealing how the molecular development of human life can be linked to the evolution of the cosmos.

NPR stories about The Universe Within 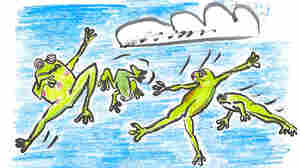 June 11, 2014 • Two Harvard professors. One on a rooftop with a bucket of frogs. The other in the front yard, down below. Ready? Get set. Throw!

Excerpt: The Universe Within

Having spent the better part of my working life staring at rocks on the ground, I've gained a certain perspective on life and the universe. My professional aspiration—uncovering clues to the making of our bodies—lies inside the baked desert floor or deep within the frozen Arctic. While this ambition may seem eccentric, it is not much different from that of colleagues who peer at the light of distant stars and galaxies, map the bottom of the oceans, or chart the surface of barren planets in our solar system. What weaves our work together are some of the most powerful ideas that mankind has ever developed, ones that can explain how we and our world came to be.

These notions inspired my first book, Your Inner Fish. Inside every organ, cell, and piece of DNA in our bodies lie over 3.5 billion years of the history of life. Accordingly, clues to the human story reside within impressions of worms in rock, the DNA of fish, and clumps of algae in a pond.

While I was thinking about that book, it became clear that worms, fish, and algae are but gateways to ever deeper connections—ones that extend back billions of years before the presence of life and of Earth itself. Written inside us is the birth of the stars, the movement of heavenly bodies across the sky, even the origin of days themselves.

During the past 13.7 billion years (or so), the universe came about in the big bang, stars have formed and died, and our planet congealed from matter in space. In the eons since, Earth has circled the sun while mountains, seas, and whole continents have come and gone.

Discovery after discovery in the past century has confirmed the multibillion-year age of Earth, the sheer vastness of the cosmos, and our species' humble position in the tree of life on our planet. Against this backdrop, you could legitimately wonder if it is part of the job description of scientists to make people feel utterly puny and insignificant in the face of the enormity of space and time.

But by smashing the smallest atoms and surveying the largest galaxies, exploring rocks on the highest mountains and in the deepest seas, and coming to terms with the DNA inside every species alive today, we uncover a sublimely beautiful truth. Within each of us lie some of the most profound stories of all.