A sequel to Perdido Street returns readers to New Crobuzon, where a new cast of characters shares mythical adventures in the sprawling, phantasmagoric city. By the author of The Scar. Reprint. 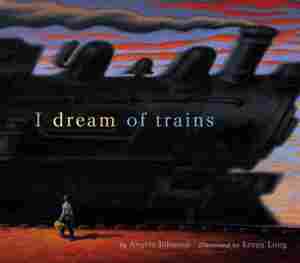 All Aboard! A Reading List For Riding The Rails

June 17, 2014 • We're not sure anyone has ever published a book list that includes both Anna Karenina and The Little Engine That Could -- so this might be a first! Find all our recommended tales of travel by train. 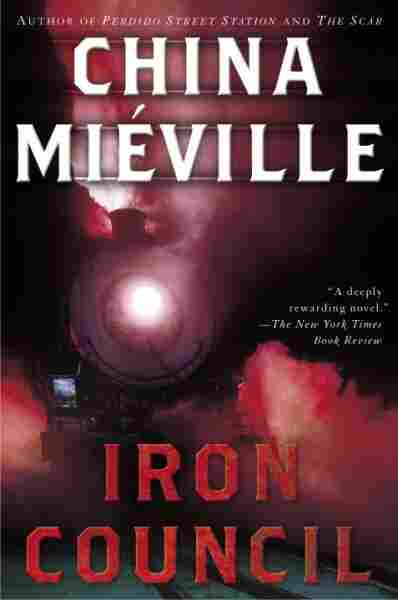 A man runs. Pushes through thin bark-and-leaf walls, through the purposeless rooms of Rudewood. The trees crowd him. This far in the forest there are aboriginal noises. The canopy rocks. The man is heavy-burdened, and sweated by the unseen sun. He is trying to follow a trail.

Just before dark he found his place. Dim hotchi paths led him to a basin ringed by roots and stone-packed soil. Trees gave out. The earth was tramped down and stained with scorching and blood. The man spread out his pack and blanket, a few books and clothes. He laid down something well-wrapped and heavy among loam and centipedes.

Rudewood was cold. The man built a fire, and with it so close the darkness shut him quite out, but he stared into it as if he might see something emergent. Things came close. There were constant bits of sound like the bronchial call of a nightbird or the breath and shucking of some unseen predator. The man was wary. He had pistol and rifle, and one at least was always in his hand.

By flamelight he saw hours pass. Sleep took him and led him away again in little gusts. Each time he woke he breathed as if coming out of water. He was stricken. Sadness and anger went across his face.

He did not notice the moment of dawn, only that time skidded again and he could see the edges of the clearing. He moved like he was made of twigs, as if he had stored up the night's damp cold. Chewing on dry meat, he listened to the forest's shuffling and paced the dirt depression.

When finally he heard voices he flattened against the bank and looked out between the trunks. Three people approached on the paths of leaf-mould and forest debris. The man watched them, his rifle steadied. When they trudged into thicker shanks of light, he saw them clearly and let his rifle fall.

"Here," he shouted. They dropped foolishly and looked for him. He raised his hand above the earth rise.

They were a woman and two men, dressed in clothes more ill-suited to Rudewood than his own. They stood before him in the arena and smiled. "Cutter." They gripped arms and slapped his back.

"I heard you for yards. What if you was followed? Who else is coming?"

They did not know. "We got your message," the smaller man said. He spoke fast and looked about him. "I went and seen. We were arguing. The others were saying, you know, we should stay. You know what they said."

They did not look at him. The woman sat, her skirt filling with air. She was breathing fast with anxiety. She bit her nails.

"Thank you. For coming." They nodded or shook Cutter's gratitude off: it sounded strange to him, and he was sure to them too. He tried not to make it sound like his sardonic norm. "It means a lot." * * * They waited in the sunken ground, scratched motifs in the earth or carved figures from dead wood. There was too much to say.

"So they told you not to come?"

The woman, Elsie, told him no, not so much, not in those words, but the Caucus had been dismissive of Cutter's call. She looked up at him and down quickly as she spoke. He nodded, and did not criticise.

"Are you sure about this?" he said, and would not accept their desultory nods. "Godsdammit are you sure? Turn your back on the Caucus? You ready to do that? For him? It's a long way we've got to go."

I can't swear we'll come back.

Pomeroy said, "Only tell me again your message was true. Tell me again he's gone, and where he's gone and what for. Tell me that's true." The big man glowered and waited, and at Cutter's brief nod and closed eyes, he said, "Well then."

Others arrived then. First another woman, Ihona; and then as they welcomed her they heard stick-litter being destroyed in heavy leaps, and a vodyanoi came through the brush. He squatted in the froggish way of his race and raised webbed hands. When he jumped from the bank, his body—head and trunk all one fat sac—rippled with impact. Fejhechrillen was besmirched and tired, his motion ill-suited to woodland.

They were anxious, not knowing how long they should wait, if any others would come. Cutter kept asking how they had heard his message. He made them unhappy. They did not want to consider their decision to join him: they knew there were many who would think it a betrayal.

"He'll be grateful," Cutter said. "He's a funny bugger and might be he'll not show it, but this'll mean a lot, to me and to him."

After silence Elsie said: "You don't know that. He didn't ask us, Cutter. He just got some message, you said. He might be angry that we've come."

Cutter could not tell her she was wrong. Instead he said: "I don't see you leaving, though. We're here for us, maybe, as well as for him."

He began to tell them what might be ahead, emphasising dangers. It seemed as if he wanted to dissuade them though they knew he did not. Drey argued with him in a rapid and nervy voice. He assured Cutter they understood. Cutter saw him persuading himself, and was silent. Drey said repeatedly that his mind was made up.

"We best move," said Elsie, when noon went. "We can't wait forever. Anyone else is coming, they've obviously got lost. They'll have to go back to the Caucus, do what's needed in the city." Someone gave a little cry and the company turned.

At the hollow's edge a hotchi rider was watching them, astride his gallus. The big war-cockerel plumped its breastfeathers and raised one spurred claw-foot in curious pose. The hotchi, squat and tough hedgehog man, stroked his mount's red comb.

"Militia coming." His accent was strong and snarling. "Two men militia coming, a minute, two." He sat forward in the ornate saddle and turned his bird around. With very little sound, with no metal to jangle on wood-and-leather straps and stirrups, it picked away high-clawed and belligerent, and was hidden by the forest.

But Cutter and his companions were shushed by the sound of approach. They looked in unsaid panic, too late to hide.

Two men came stepping over fungused stumps into view. They were masked and uniformed in the militia's dark grey. Each had a mirrored shield and ungainly pepperpot revolver slack at his side. As they came into the clearing they faltered and were still, taking in the men and women waiting for them.

There was a dragged-out second when no one moved, when befuddled and silent conference was held—are you, are they, what, should we, should we—?—till someone shot. Then there were a spate of sounds, screams and the percussion of shots. People fell. Cutter could not follow who was where and was gut-terrified that he had been hit and not yet felt it. When the guns' heinous syncopation stopped, he unclenched his jaw.

Someone was calling Oh gods oh fucking gods. It was a militiaman, sitting bleeding from a belly-wound beside his dead friend and trying to hold his heavy pistol up. Cutter heard the curt torn-cloth sound of archery and the militia man lay back with an arrow in him and stopped his noise.

Again a beat of silence then "Jabber—" "Are you, is everyone—?" "Drey? Pomeroy?"

First Cutter thought none of his own were hit. Then he saw how Drey was white and held his shoulder, and that blood dyed his palsying hands.

"Sweet Jabber, man." Cutter made Drey sit (Is it all right? the little man kept saying.) Bullet had taken muscle. Cutter tore strips from Drey's shirt, and wound those cleanest around the hole. The pain made Drey fight, and Pomeroy and Fejh had to hold him. They gave him a thumb-thick branch to bite while they bandaged him.

"They must've fucking followed you, you halfwit bastards." Cutter was raging while he worked. "I told you to be fucking careful—"

"We were," Pomeroy shouted, jabbing his finger at Cutter.

"Didn't follow them." The hotchi reappeared, its rooster picking. "Them patrol the pits. You been here long time, a day nearly." It dismounted and walked the rim of the arena. "You been too long."

It showed the teeth in its snout in some opaque expression. Lower than Cutter's chest but rotundly muscular, it strutted like a bigger man. By the militia it stopped and sniffed. It sat up the one killed by its arrow and began to push the missile through the body.

"When them don't come back, them send more," it said. "Them come after you. Maybe now." It steered the arrow past bones through the dead chest. It gripped the shaft when it came out the corpse's back, and pulled the fletch through with a wet sound. The hotchi tucked it bloody into his belt, picked the revolving pistol from the militiaman's stiffening fingers and fired it against the hole.

Birds rose up again at the shot. The hotchi snarled with the unfamiliar recoil and shook its hand. The arrow's fingerthick burrow had become a cavity.

"Your tribe . . ." said Cutter. "They're with us? On our side? Some of the hotchi are with the Caucus," he said to the others. "That's why this place's all right. Or was supposed to be. This lad's clan got no time for the militia. Give us passage. But . . . can't risk a real fight with the city, so they've to make it look like it was us killed the officers, not their arrows." He understood as he said it.

Pomeroy and the hotchi rifled the killed men together. Pomeroy threw one of the pepperpot revolvers to Elsie, one to Cutter. It was modernistic and expensive and Cutter had never held one before. It was heavy, with its six barrels arranged in a fat rotating cylinder.

"Jabber . . . we better fucking go." Drey's voice went up and down with pain. "Fucking guns going off going to call them for miles . . ."

"Not so many nearby," said the hotchi. "Maybe none to hear. But you should gone, yes. What you for? Why leave city? You looking for him come by on the clay man?"

Cutter looked to the others and they watched him carefully, letting him speak.