Title
Written in My Own Heart's Blood
Author
Diana Gabaldon

After being presumed dead, Jamie Fraser returns to find that his best friend has married his wife, his illegitimate son has discovered who is real father is and his nephew has decided to marry a Quaker.

NPR stories about Written in My Own Heart's Blood 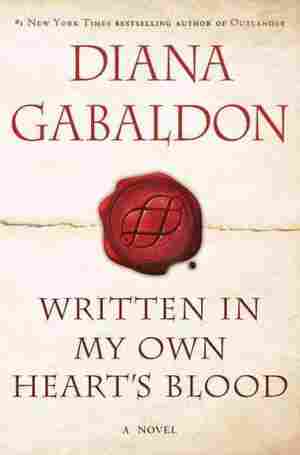 August 8, 2014 • Twenty years ago, Diana Gabaldon's time-travel epic Outlander shot to the top of the best-seller lists — and stayed there. NPR's Karen Grigsby Bates digs into the enduring potency of Gabaldon's magic.

Read An Excerpt: 'Written In My Own Heart's Blood'

A HUNDREDWEIGHT OF STONES

The forest between Philadelphia and Valley Forge

IAN MURRAY STOOD with a stone in his hand, eyeing the ground he'd chosen. A small clearing, out of the way, up among a scatter of great lichened boulders, under the shadow of firs and at the foot of a big red cedar; a place where no casual passerby would go, but not inaccessible. He meant to bring them up here — the family.

Fergus, to begin with. Maybe just Fergus, by himself. Mam had raised Fergus from the time he was ten, and he'd had no mother before that. Fergus had known Mam longer than Ian had, and loved her as much. Maybe more, he thought, his grief aggravated by guilt. Fergus had stayed with her at Lallybroch, helped to take care of her and the place; he hadn't. He swallowed hard and, walking into the small clear space, set his stone in the middle, then stood back to look.

Even as he did so, he found himself shaking his head. No, it had to be two cairns. His mam and Uncle Jamie were brother and sister, and the family could mourn them here together — but there were others he might bring, maybe, to remember and pay their respects. And those were the folk who would have known Jamie Fraser and loved him well but wouldn't ken Jenny Murray from a hole in the --

The image of his mother in a hole in the ground stabbed him like a fork, retreated with the recollection that she wasn't after all in a grave, and stabbed again all the harder for that. He really couldn't bear the vision of them drowning, maybe clinging to each other, struggling to keep --

"A Dhia!" he said violently, and dropped the stone, turning back at once to find more. He'd seen people drown.

Tears ran down his face with the sweat of the summer day; he didn't mind it, only stopping now and then to wipe his nose on his sleeve. He'd tied a rolled kerchief round his head to keep the hair and the stinging sweat out of his eyes; it was sopping before he'd added more than twenty stones to each of the cairns.

He and his brothers had built a fine cairn for their father before he died, at the head of the carved stone that bore his name — all his names, in spite of the expense — in the burying ground at Lallybroch. And then later, at the funeral, members of the family, followed by the tenants and then the servants, had come one by one to add a stone each to the weight of remembrance.

Fergus, then. Or ... no, what was he thinking? Auntie Claire must be the first he brought here. She wasn't Scots herself, but she kent fine what a cairn was and would maybe be comforted a bit to see Uncle Jamie's. Aye, right. Auntie Claire, then Fergus. Uncle Jamie was Fergus's foster father; he had a right. And then maybe Marsali and the children. But maybe Germain was old enough to come with Fergus? He was ten, near enough to being a man to understand, to be treated like a man. And Uncle Jamie was his grandsire; it was proper.

He stepped back again and wiped his face, breathing heavily. Bugs whined and buzzed past his ears and hovered over him, wanting his blood, but he'd stripped to a loincloth and rubbed himself with bear grease and mint in the Mohawk way; they didn't touch him.

"Look over them, O spirit of red cedar," he said softly in Mohawk, gazing up into the fragrant branches of the tree. "Guard their souls and keep their presence here, fresh as thy branches."

He crossed himself and bent to dig about in the soft leaf mold. A few more rocks, he thought. In case they might be scattered by some passing animal. Scattered like his thoughts, which roamed restless to and fro among the faces of his family, the folk of the Ridge — God, might he ever go back there? Bri- anna. Oh, Jesus, Brianna ...

He bit his lip and tasted salt, licked it away and moved on, foraging. She was safe with Roger Mac and the weans. But, Jesus, he could have used her advice — even more, Roger Mac's.

Who was left for him to ask, if he needed help in taking care of them all? Thought of Rachel came to him, and the tightness in his chest eased a little. Aye, if he had Rachel ... She was younger than him, nay more than nineteen, and, being a Quaker, had very strange notions of how things should be, but if he had her, he'd have solid rock under his feet. He hoped he would have her, but there were still things he must say to her, and the thought of that conversation made the tightness in his chest come back.

The picture of his cousin Brianna came back, too, and lingered in his mind: tall, long-nosed and strong-boned as her father ... and with it rose the image of his other cousin, Bree's half brother. Holy God, William. And what ought he to do about William? He doubted the man kent the truth, kent that he was Jamie Fraser's son — was it Ian's responsibility to tell him so? To bring him here and explain what he'd lost?

He must have groaned at the thought, for his dog, Rollo, lifted his massive head and looked at him in concern.

"No, I dinna ken that, either," Ian told him. "Let it bide, aye?" Rollo laid his head back on his paws, shivered his shaggy hide against the flies, and relaxed in boneless peace.

Ian worked awhile longer and let the thoughts drain away with his sweat and his tears. He finally stopped when the sinking sun touched the tops of his cairns, feeling tired but more at peace. The cairns rose knee-high, side by side, small but solid.

He stood still for a bit, not thinking anymore, just listening to the fussing of wee birds in the grass and the breathing of the wind among the trees. Then he sighed deeply, squatted, and touched one of the cairns.

"Tha gaol agam oirbh, a Mhàthair," he said softly. My love is upon you, Mother. Closed his eyes and laid a scuffed hand on the other heap of stones. The dirt ground into his skin made his fingers feel strange, as though he could maybe reach straight through the earth and touch what he needed.

He stayed still, breathing, then opened his eyes.

WILLIAM RANSOM, Ninth Earl of Ellesmere, Viscount Ashness, Baron Derwent, shoved his way through the crowds on Market Street, oblivious to the complaints of those rebounding from his impact.

He didn't know where he was going, or what he might do when he got there. All he knew was that he'd burst if he stood still.

His head throbbed like an inflamed boil. Everything throbbed. His hand — he'd probably broken something, but he didn't care. His heart, pounding and sore inside his chest. His foot, for God's sake — what, had he kicked something? He lashed out viciously at a loose cobblestone and sent it rocketing through a crowd of geese, who set up a huge cackle and lunged at him, hissing and beating at his shins with their wings.

Feathers and goose shit flew wide, and the crowd scattered in all directions.

"Bastard!" shrieked the goose-girl, and struck at him with her crook, catching him a shrewd thump on the ear. "Devil take you, dreckiger Bastard!"

This sentiment was echoed by a number of other angry voices, and he veered into an alley, pursued by shouts and honks of agitation.

He rubbed his throbbing ear, lurching into buildings as he passed, oblivious to everything but the one word throbbing ever louder in his head. Bastard.

"Bastard!" he said out loud, and shouted, "Bastard, bastard, bastard!" at the top of his lungs, hammering at the brick wall next to him with a clenched fist.

"Who's a bastard?" said a curious voice behind him. He swung round to see a young woman looking at him with some interest. Her eyes moved slowly down his frame, taking note of the heaving chest, the bloodstains on the facings of his uniform coat, and the green smears of goose shit on his breeches. Her gaze reached his silver-buckled shoes and returned to his face with more interest.

"Oh, eally?" She left the shelter of the doorway in which she'd been lingering and came across the alley to stand right in front of him. She was tall and slim and had a very fine pair of high young breasts — which were clearly visible under the thin muslin of her shift, because, while she had a silk petticoat, she wore no stays. No cap, either — her hair fell loose over her shoulders. A whore.

"I'm partial to bastards myself," she said, and touched him lightly on the arm. "What kind of bastard are you? A wicked one? An evil one?"

"A sorry one," he said, and scowled when she laughed. She saw the scowl but didn't pull back.

"Come in," she said, and took his hand. "You look as though you could do with a drink." He saw her glance at his knuckles, burst and bleeding, and she caught her lower lip behind small white teeth. She didn't seem afraid, though, and he found himself drawn, unprotesting, into the shadowed doorway after her.

What did it matter? he thought, with a sudden savage weariness. What did anything matter?