The Remarkable Story of Two Families Who Share the Tomlinson Name - One White, One Black

by Chris Tomlinson and LaDainian Tomlinson

Relates the stories of two families, one black and one white, who trace their ancestry to the same Texas slave plantation, and the author's discovery that his counterpart in the African American family is NFL running back LaDainian Tomlinson. 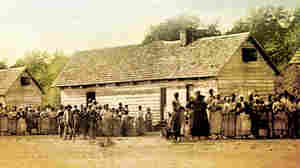 July 21, 2014 • Chris Tomlinson covered conflict, including apartheid in Africa, for 11 years. Then the great-great-grandson of Texas slaveholders realized he needed to write a book about his family's history. 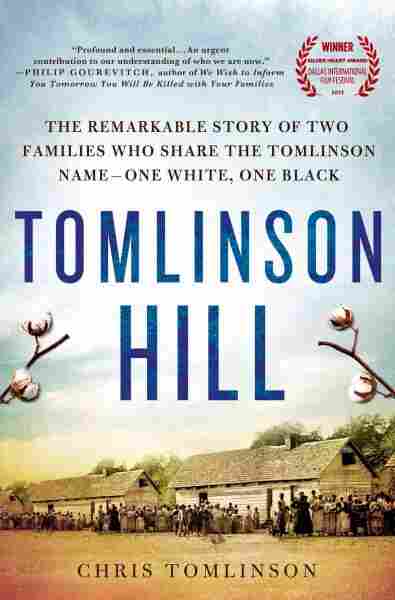 They loved us so much, they took Tomlinson as their last name.

When I was a child, my father told me about Tomlinson Hill. He said it was not much of a hill; just a plot of flat land along the Brazos River. But it was the place our family came from, the origin of our Texaness. My great-grandfather bought the Hill in 1856, grew cotton, and owned slaves. Yet my father never took me there. I was told it was just a boring open field, with a picnic pavilion for Memorial Day barbecues and family reunions. My parents never went to those reunions, but other Tomlinsons did.

The old family photos and newspaper articles talked about Texas Rangers, cowboys, and proud southerners. My father had told me I was a fifth-generation Texan, something few white people could claim. There was also talk about a Tomlinson who died defending the Alamo. The clippings suggested an epic family history, and I created elaborate fantasies about my ancestors and their exploits.

The reality of my home life prompted much of this. My father, Bob Tomlinson, co-owned a bowling-supply shop with his father. We didn't have much money, and Dad spent his evenings and weekends in bowling alleys. When he was home, my parents fought, usually about money and often about my father's lack of ambition. He was overweight, wore his hair long, and had a 1970s mustache. He wore garish shirts and high-heeled boots and listened to jazz on Sunday mornings in his bathrobe. He believed in corporal punishment, usually administered with a belt.

My paternal grandfather, Albert "Tommy" Tomlinson, was a taciturn man, and he and my father fought a lot, too. My memories of him are few, but I know he wore a small gray Stetson, which made him look like President Lyndon B. Johnson. My grandmother Mary cautioned me not to make a lot of noise or bother him while I was at their house, as he was easily angered. I spent most of my time in the kitchen with her and their African-American housekeeper, Faye.

So I was excited to find the scrapbooks. The obituaries and anniversary notices mentioned Tomlinson Hill but provided no details. When I asked about it, relatives provided me with only one fact about the old slave plantation: When emancipation came, the former slaves had taken our name as their own. There were black Tomlinsons, too.

To a white boy growing up in the midst of civil rights turmoil in Dallas, this was a staggering revelation. In the early 1970s, it was perhaps the most important topic in Dallas, where the school board was dragging its feet on desegregation and everyone worried about the consequences. Parents and activists, teachers and politicians, liberals and conservatives were all fighting over how to deal with generations of bigotry and discrimination. We watched race riots sparked by busing in Boston on the nightly news, and I wondered if that would happen at my school.

Before he died, on New Year's Eve in 1973, my grandfather tried to make me proud of being a Texan. My father tried to keep me from becoming a racist. And bringing both points home in my young imagination was the knowledge that somewhere in rural Texas there were black Tomlinsons who shared our heritage.

My ancestors had owned their ancestors.

I tried to imagine the black Tomlinsons. Could their family have moved to Dallas, too? Were they still in the country? What an irony that would be. I had always imagined blacks to be urban and the countryside to be white. To me, rural Texas was the backwoods, a place where the sun didn't reach the forest floor, where rednecks still grew cotton, hunted deer, gigged frogs, and fried catfish. It was the place where the Ku Klux Klan roamed the red clay roads and burned crosses at night. The country was where the bogeyman lived.

Thirty years later, I was standing on a mountain ridge near Tora Bora, covering Osama bin Laden's last stand in Afghanistan. Fighter jets screamed through the bitterly cold winter sky, dropping laser-guided bombs on the caves where al-Qaeda had fled following the September eleventh terrorist attacks. At night, I slept in a mud hut a farmer had been using to dry peanuts. His compound was the closest shelter to the front line. The Associated Press team and a handful of other writers and photographers huddled around propane heaters to escape the mountain cold. We could hear the relentless explosions of two-thousand-pound bombs in the next valley over, but occasionally one would go astray and fall close enough to shake the walls of our shack.

We spent our days with the mujahideen at the front lines as they fought their way to reach Osama's redoubt. At night, we sipped tea with Pashtu warlords, transmitted our stories and photographs by satellite phone, and planned for the next day.

At the same time, on the other side of the planet, a young African-American athlete worked hard to prove himself in his rookie year in the National Football League. LaDainian Tomlinson had led the NCAA in rushing his senior year at Texas Christian University, carrying the ball for 2,158 yards and scoring twenty-two touchdowns. The San Diego Chargers recognized his talent and picked him in the first round of the 2001 draft. LaDainian was one of the best running backs in the NFL, but the Chargers were one of the worst teams. He planned to change that.

On December 15, 2001, I was sitting in the sun with Afghan warlords while they used a walkie-talkie to negotiate the surrender of al-Qaeda fighters, who were decimated and demoralized by American air power. LaDainian was in Qualcomm Stadium in San Diego, being pummeled by the Oakland Raiders in a game that would end with a 6-13 loss for the Chargers.

We had never met, but we shared a common legacy. We both traced our heritage to Tomlinson Hill. And we both had traveled far from Texas to create better lives for ourselves. I was the city boy who became a foreign correspondent; he was the country boy who became a millionaire football player.

My father first told me about LaDainian in 1999 and guessed he must be a descendant of Tomlinson Hill slaves. He was right. LaDainian had spent summers with his grandparents playing in the fields where his great-grandfather had been a slave and picked cotton.

By 2007, I was growing weary after eleven years covering war and destruction in Africa and the Middle East. I had spent most of 2006 traveling to Somalia, getting to know the clan leaders and covering the war there, and I had lost my stomach for it. I wasn't frightened for my life, nor was I feeling any foreboding. I had just stopped enjoying my work. I didn't want to be surrounded by teenagers with assault rifles anymore; I didn't want to see any more starving babies. Somalia had already been destroyed by civil war and fourteen years of anarchy. I had just witnessed another wave of violence, and I knew there was another one coming. For the first time, I felt despair.

And then Anthony died.

When I became the East Africa bureau chief, I knew one of my staff would likely die on assignment. The two bureau chiefs before me had both lost someone. But I had worked hard to train everyone to stay alive in the four war zones we covered from Nairobi. I lectured endlessly on tactics and procedures. I had felt especially responsible for Anthony Mitchell. He had been expelled from Ethiopia because of his reporting, and as a result, his wife had lost her job, their main source of income. I couldn't do much to help him in terms of money, but I tried to give him special assignments that he enjoyed, hoping to make up for his low pay and long hours. Coming home from one of those assignments, his plane crashed nose-first into a jungle in Cameroon, leaving his two small children without a father. Telling Catherine that her husband's plane was lost and that Anthony was likely dead tripped a circuit breaker in my heart. I'd had enough death. So a few months later, when my wife, Shalini, told me she had an interview scheduled for an exciting job in Texas, I knew fate was telling me it was time to go home.

The return to Texas was fraught with emotional land mines. Since I had left home at seventeen, I'd rarely spoken to any of my relatives. When I left for South Africa in 1993, my maternal grandmother was sure that even if I managed to escape the tribal violence, a wild animal would maul me. To people without passports and little knowledge of the world, my decision to go to Africa was unfathomable. No one ever directly asked me why I wanted to go, but neither did I offer any explanation except to say I wanted adventure. Meeting Nelson Mandela or marching through eastern Congo with Laurent Kabila's rebel army did not impress them. They would occasionally ask me if I was making enough money, but that was about all.

After years of avoiding what Shalini called my "southern gothic" family, we moved to Austin, just a few hours' drive away from my father. I was at a stage where I was ready to tackle whatever skeletons would leap out of the Tomlinson closet. I had made friends with Somali warlords, negotiated with drunken child soldiers, and faced down a mob of angry Rwandan refugees. How bad could my family really be? Besides, I was also going to live in my favorite city with my closest friends, whom I loved deeply.

Once we settled in Austin, I kept working for the AP on a part-time basis, making trips from Austin to Iraq and Africa on special assignments. But in between my overseas trips, I was remembering what it means to be a Texan. I saw my best friend from high school several times a week. Shalini and I would take walks on the University of Texas campus, where we had met. But I was also excited to learn the truth about my family and its legacy. I planned to go to Tomlinson Hill for the first time, and I wanted to find the black Tomlinsons.