Assembles a unique anthology of clothing-inspired personal narratives from people of all stripes, including David Carr on his misprinted I Love NY T-shirt, Cynthia Rowley on her girl scout sash, Rosanne Cash on her father Johnny's (atypically) purple shirt that she keeps in her closet, and Jonathan Levine (director of 50/50 and The Wackness) on his once-lucky Latrell Sprewell Knicks Jersey. The stories offer heartfelt glimpses into someone else's life, and prompt readers to give a second thought to the way they consider clothing in their own lives. 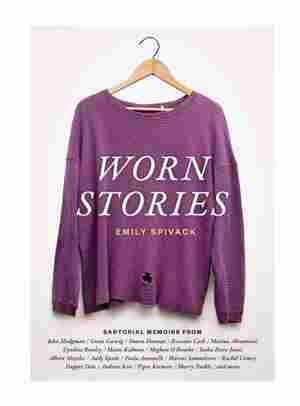 On a brisk winter day in late 2013, I took my students on a tour of a national thrift-store chain's largest distribution center in Brooklyn as part of an undergraduate course I was teaching. The four-story building—a converted horse stable built in the early 1800s—was humming with activity. We were shown each floor's dedicated purpose in sifting through the tons of clothing, as well as bric-a-brac, electronics, and furniture, that arrive each day. Jeans, T-shirts, skirts, unworn designer wedding dresses, shoes, winter coats, and bathing suits were emptied by the truckload each morning on the first floor. Then they were sorted, priced, and hung on plastic hangers on the third floor, brought to the store on the second floor, put into out-of-season storage on the fourth floor, or taken back down to the first floor, where they were reloaded onto a truck and taken to another one of the thrift store's many locations throughout Brooklyn.

The sheer quantity of clothing passing through this facility—about ten thousand pieces per day—was astounding. Even more eye-opening was what happened to the clothes that weren't deemed worthy by the store's sorters. They were dumped down a chute, called "the hole." The mounds of clothes landed in a bin on the first floor and piled up until a machine compressed them into thousand-pound cubes. Those packages were then sold in bulk to distributors who shipped them to third-world countries or shredded them into rags.

The clothes were no longer recognizable for their function or style after they had been packed into cubes. It was hard to believe that someone had once worn them. You know when you repeat a word over and over, and suddenly the word becomes unfamiliar, strange-sounding? It was like that, but with clothes. They became meaningless stuff. Each garment had lost all attachment to its previous owner and its intended use. It had nothing to do with fashion. And there was just so much of it.

Who had worn the garment before it was donated to the thrift store? Where had it been? What was the previous owner like? Except for a lingering scent of perfume or body odor, a stain, or a movie stub in the pocket of a pair of jeans, that history, and each garment's provenance, was lost.

These are questions I was asking when I started the Worn Stories project in 2010. I was curious about our garments' histories and wanted to create a place to record and preserve these stories: first, my own; then, entries from my friends and family; and, eventually, the stories of strangers.

Our clothes are full of memory and meaning. That's why we all have garments—hanging in our closets, shoved in the backs of drawers, and boxed up in garages—that we haven't worn in years but just can't part with. And then there are the clothes we wear every day, whose stories are still unfolding.

My own closet is full of clothes; it is also an evolving archive of experiences, adventures, and memories. I began using my clothes to write about those experiences—my first concert T-shirt, a hand-me-down scarf, a handmade sweater. Quickly, three things became clear: First, clothes can be a rich and universal storytelling device. Second, I was much more interested in the clothing-inspired narratives of other people than in my own. And third, if those stories aren't captured, they disappear.

For the Worn Stories website, wornstories.com, and eventually for this book, I asked for stories from people I knew or admired—artists, musicians, writers, filmmakers, chefs, entrepreneurs, and designers. I put out a call to friends and acquaintances I'd known for years. And I solicited contributions on the Worn Stories website, from listservs, and via Craigslist. Most contributors told me their stories; others wrote them themselves. In each case, the request was the same: Select a piece of clothing still in your possession with a compelling story behind it, whether something spectacular, unexpected, weird, wonderful, or momentous happened while you were wearing it. And share what you remember. As a result, the subject matter of these tales ranges from the everyday to the extraordinary. They include recollections about clothing worn during a breakup and during a kidnapping, while accidentally tripping on acid and while taking aerobics classes, on a visit to the White House and on a trek along the Great Wall of China.

The intent of this book is simple: that these tales will not only offer a glimpse into the lives of these contributors but also prompt you, the reader, to reconsider the role of clothing in your own life—before your clothes someday wind up in anonymous piles like those I saw at the thrift store's distribution facility.

The clothes that protect us, that make us laugh, that serve as a uniform, that help us assert our identity or aspirations, that we wear to remember someone—in all of these are encoded the stories of our lives. We all have a memoir in miniature living in a garment we've worn. This book brings some of those stories to light.