Accessibility links
The End of Night NPR coverage of The End of Night: Searching for Natural Darkness in an Age of Artificial Light by Paul Bogard. News, author interviews, critics' picks and more.

The End of Night

The End of Night

Searching for Natural Darkness in an Age of Artificial Light

Describes how ever-present, modern artificial lights have changed the way humans experience darkness and bemoans the fact that the primal dark sky can no longer influence science and art.

Excerpt: The End Of Night 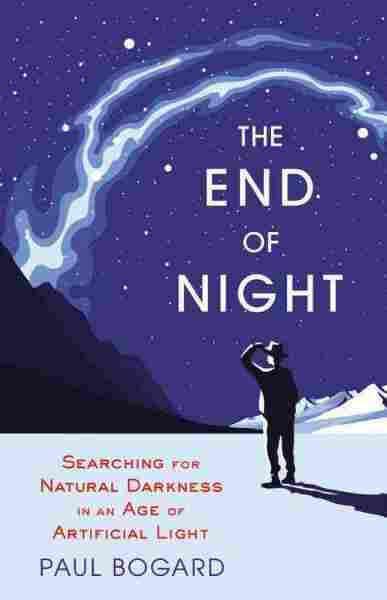 The End of Night: Searching for Natural Darkness in an Age of Artificial Light

From a Starry Night to a Streetlight

It often seems to me that the night is much more alive and richly coloredthan the day.

The brightest beam of light on Earth shoots from the apex of the Luxor casino's black pyramid in Las Vegas, thirty-nine brilliant blended xenon lamps, each six feet tall and three feet wide (the greatest number of lamps they could fit in the space), reflecting off mirrors and marking, like a push-pin on the night map of the known world, the brightest city on earth. New York, London, and Paris,Tokyo, Madrid, and a slew of cities in China — with their larger geographies and populations — may send more light into space overall than this single desert city in the American Southwest. But the "overall" qualifier is important, for it would be foolish to think there is any brighter real estate in the world than the Las Vegas Strip.

Standing on the corner of Las Vegas Boulevard and Bellagio Drive, I am immersed in artificial light, subsumed in the accumulated glow from the city's thousands of businesses and tens of thousands of homes, encased by peach-colored high-pressure sodium from the city's fifty thousand streetlights, most of which I'd seen from the plane just an hour ago. From the airport the Strip is only a short drive — the Luxor's beam on its south end meets you almost immediately — and in no time you are swallowed by light. Casinos rise bathed by floods, with ten million bulbs illuminating their glittering, flashing, changing signs. Digital screens and LED billboards call out from every corner, SEE OUR SHOWS! RENT OUR ROOMS!PLAY OUR SLOTS! Red lights, purple lights, green lights, blue — imported palm trees march past the illuminated iron footings of the Tour Eiffel of the Paris, Las Vegas casino, the tower drenched with gold-yellow light from base to tip-top,an exact replica of the real though half the size. A steady stream of headlights bob past, trailed by rafts of bright red tails. On a ruby-colored billboard truck, a blonde in a white bikini smiles. "HOT BABES, Direct to You."Most of the lights want to sell you something, and the Strip has the feel of one big outdoor mall, with canned music piped in and the natural desert pushed out. Some signs are brighter than others, some buildings more brightly lit, but everything is illuminated: The ground at my feet, the clothing on my body, the bare skin of my hands and arms and face, no surface remains uncoated — even the air itself seems full of light — and I walk through its presence as though pushing through an invisible scentless mist. In these first decades of the new century we live in a world that is brighter than ever before in history and growing brighter every year. If any city reflects that fact, it's Vegas.

Which is one reason I have come here to go stargazing. Rob Lambert, president of the Las Vegas Astronomical Society (there is such a thing, yes), has agreed to meet at the famous fountains in front of the Bellagio Hotel, saying, "I've got my telescopes in the back of my truck, so it will be no problem to bring them along." We may not have any luck — there can't be any better example than the Las Vegas Strip of Bortle Class 9, where "the entire sky is brightly lit, even at the zenith." But it's worth a try.

I wander over to the Bellagio, the tall curved casino set back from the reflecting pool housing the fountains, and when Lambert arrives we joke that we have chosen a popular spot, that we will be joined in our stargazing by hundreds of others — though they are here for comedians, magicians, musicians ... and fountains — different stars than those we have come to see.

"People don't think about Las Vegas as a place to come look at the stars,"Lambert tells me, "but we do quite a bit of outreach. Our slogan is, 'The greatest stars of Las Vegas can't be seen from the Strip.' Our club membership is only about a hundred, but when we have our star parties we have anywhere from seventy-five to five hundred fifty public."

Lambert takes out his laser pointer and cuts a thin green beam toward Orion --or,rather, the two bright stars from Orion we can see. "Okay, so that's Rigel on the bottom and Betelgeuse on the top left." He moves the laser lower to the left. "And there's Sirius, the brightest star in the sky." At first, I'm surprised we can see any stars tonight — this is my first visit to the Strip, and I had imagined the entire sky might be washed out by the lights. "Well, that'sa lmost true," says Lambert. "When you consider that the stars we can see tonight are brighter than ninety-eight to ninety-nine percent of the stars our eyes could see, you start to realize what we're missing."

Behind us the water cannons begin going off, rumbling like distant thunder. The music changes to a kind of weird Italian carnival tune, coordinated with the booming cannons and joined by crashing cymbals. Someone nearby says, "I feel like breaking into song!" When I look to see who said this, I realize Lambert and I have turned so we face away from the fountain show, the only two in the crowd. "The winter Milky Way is actually over us," says Lambert, still looking at the sky, "but you can't see it ..."

We agree to walk down the Strip to the Luxor, and as we start our trek south,Lambert tells me that he didn't get started with astronomy until after he turned fifty, that he'd heard some people at work talking about "star parties" and wondered what they were. Next thing he knew he was watching a friend's telescope at such a party, he says, and telling observers what they were seeing. "He had to go help someone with their scope and so he asked me to show people M13 through his telescope. So I said, sure, what's M13? He quickly told me M13 is a globular cluster in the constellation Hercules that is twenty-five thousand light-years away and made up of about seven hundred fifty thousand stars. And so for ninety minutes I told people everything I knew about M13, and absolutely had a ball."

We pass a man blasting solos on a cheap electric guitar, and further down the street the ghost of Keith Moon banging the hell out of a drum set, dozens of nude trading cards littering the sidewalk at our feet. On every block people are shouting into microphones, straining to be heard. Packs of partiers bump past,yelling their thoughts, half of them transfixed by cell phone screens, half staring, dazed at billboards pulsing light-emitting diodes (LEDs), and I'm reminded of how urban developers call signs like these "bug lights" — so bright they draw gawking crowds.

I ask Lambert about the appeal of looking at the night sky. "One of the things that I share with people is that, regardless of what your beliefs about creation are, it's still happening, there are stars being born, there are planets being born, stuff is still going on. For example, our 'challenge object' this month was Hubble's variable nebula, which changes all the time. You can look at it this year, look at it next year, and it's going to be different. And so you actually see things happening up there."

Not from downtown Las Vegas you don't, nor from any downtown in the developed world. While the lights of the night sky are far brighter than anything humans have ever created, all save one are so far away we see them as faint, if we see them at all. Instead, at night, we see the lights of our own making. While few cities have a space as intensely lit as the Las Vegas Strip, it's not just the Strip that makes Las Vegas bright. Here as in every city or suburb, it's the accumulated glow from an array of different sources that has utterly changed our experience of night.