A Brilliant Young Man Who Left Newark for the Ivy League

Jeff Hobbs traces a young man's effort to escape the dangers of the streets and his own nature after graduating from Yale. It describes his youth in violent 1980s Newark and his struggle to navigate two fiercely insular worlds.

NPR stories about The Short and Tragic Life of Robert Peace 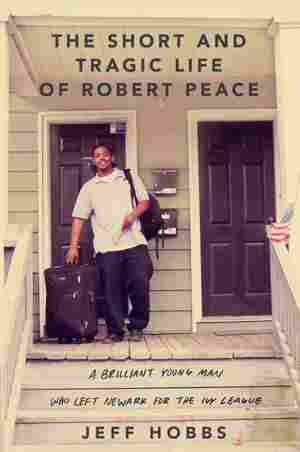 September 23, 2014 • Robert Peace, a 30-year-old African-American, was a Yale University graduate and an almost straight-A student in molecular biophysics and biochemistry. He also dealt marijuana.

Excerpt: The Short and Tragic Life of Robert Peace

"WHY IS THE AIR NOT ON?" Jackie Peace asked from the back of the car.

"It wears the engine," her mother, Frances, replied from the driver's seat. "You can't bear it for four blocks?"

"He just feels hot to me, real hot." And then, when her mother chuckled: "What's funny?"

"You're a brand-new mama and that's why you have no idea."

"Babies are strong. They can handle just about anything."

Robert DeShaun Peace, the baby in question, lay sleepy-eyed and pawing in Jackie's arms. He was a day and a half old, eight pounds, ten ounces. When he'd first been weighed, the number had sounded husky to her. Now, outside the hospital for the first time, he felt nearly weightless. The street outside the car was dark and empty on this swampy late-June night in 1980. The last of the neighborhood children had been called inside to clear the way for the hustlers who governed much of the greater Newark, New Jersey, area, and particularly this township of Orange, during the wilderness of the nocturnal hours.

As Frances had noted, St. Mary's Hospital was indeed less than half a mile from 181 Chapman Street, where the Peace family lived. They were parked outside their home within two minutes. Chapman Street was about a hundred yards long, dead-ending on South Center Street to the west and Hickory to the east. These bookends actually protected the 100 block from most of the neighborhood's nightly commerce; dealers found the short stretch claustrophobic, and they were slightly wary of Frances, who never hesitated to march outside at any hour and tell them to get the hell out of her sight.

Jackie carried her son inside, past the rusty fence and weedy rectangle of lawn, up the five buckled stoop stairs, across the narrow porch, and through the open front door, where the ceiling fan made the air cooler. The street had been deserted, but the parlor and dining room were crowded with family. She had eight siblings, enough that she couldn't keep track of who was living in the house at any given time. Still dizzy from labor and first feedings, she didn't bother to count how many were there tonight as she reluctantly let the baby be passed around the living room, from her father, Horace, to her sisters Camilla and Carol to her brothers Dante and Garcia. Then her son was crying, and Jackie took him back and carried him to the room on the second floor where they could be alone, which was all she really wanted right now.

"Swaddle that baby and he'll stop the crying," her mother called as she ascended the stairs.

"I told you I'm not swaddling anything in this heat!" Jackie called in response. And to Carl, who was something like an adopted younger brother, "If you see Skeet out tonight, tell him to get back here." Skeet was Rob's father.

She laid the boy naked in the center of the mattress with a towel spread beneath him, and she lay beside him at the edge of the single bed to let him feed. They fell asleep that way, with her hand pressed against his back, holding him against her. His cries woke her in the early morning, and she raised her head hoping that Skeet would be there — he had left the hospital room abruptly a few hours after the birth, saying he had some "things to take care of" — but she and the baby remained the only warm bodies in the room.

ASIDE FROM A few failed attempts to strike out on her own, Jackie Peace had lived on Chapman Street in Orange, New Jersey, since 1960, when she was eleven. The house had first belonged to her uncle and had been left in her father's name when that uncle died of lung cancer. Back then, the Peaces had been one of two black families on a block of middle-class European immigrants, mostly Italian, and their race hadn't bothered anyone. In that climate, people didn't think much about race, at least not outwardly. They thought about work. They thought about family. They thought about property. Men woke early and rode buses and car pools to the factory jobs that were the lifeblood of the greater Newark economy. Women stayed home and raised children. Neighbors, in silent and efficient understanding, kept an eye on the homes on either side of theirs, most of which were turn-of-the-century clapboards with peaked roofs set atop fourth-floor attics — attics packed with old photo albums and records and dishware, remnants of the passing down of property from generation to generation beginning in the early 1900s. The homes were narrow and close together, but inside they felt big enough, with high ceilings and wide portals between rooms and long backyards shaded by native willow oaks. Police made regular patrols and were known by name.

Central Avenue, a thoroughfare one block south of and parallel to Chapman Street, connected downtown Newark to the pastoral townships farther west: a succession of Italian, Polish, and Jewish grocers, pharmacies, clothing stores, flower shops, funeral homes, and local banks. On the south side of Central Avenue, Orange Park stretched out in ten green, rolling acres shaped like an arrow, its grounds bright with mothers gossiping and children playing. Though dense and urban, Orange could feel very much like a small town where all needs — social, domestic, financial — were proximate and easily sustained. Because factories were the central commerce of greater Newark, and because the workers in those factories lived in places such as Orange, families like the Peaces could feel vital, as if the history of the city of Newark were moving through them.

If Jackie looked east on Central Avenue, in the direction of downtown, she could see in the distance the first of those brick, boxy towers known as "slums in the sky." The federal Department of Housing and Urban Development had erected sixteen of these projects in the 1950s to manage the influx of southerners seeking industrial work — mostly poor and mostly black. These communities had been intentionally segregated by race, in accordance with the common wisdom of urban planners at the time: if people were going to be stacked in such an uncomfortable way, they'd likely be more comfortable stacked with others of their own kind. The towers also served to segregate the urban problems of drugs, violence, and extreme poverty. With such signals largely contained behind those sheer walls and barred windows, people like Jackie and her siblings could drive wide around them, windows up and doors locked.

Jackie's father, Horace, worked at Linden Assembly, a General Motors plant three towns away. She didn't know what he did exactly, only that his work involved simple mechanical tasks that he performed over and over again, all day, every day. She'd always figured this repetition to be the source of his sternness, his absolute insistence on correct manners and etiquette. To him, life was lived successfully by getting the small things right every time. If he grew lazy on the job, he'd be fired and replaced by someone else who wouldn't, any one of the thousands of workers who could do what he did. Likewise, if Jackie or her siblings forgot to say, "May I please ... ," when asking for something, they'd be slapped — once, hard — on the back of the head. Days were about doing your chores and schoolwork quietly, keeping questions to a minimum. Nights were about staying out of Horace's way — also quietly, which was harder to do as younger siblings (Jackie was the third of nine) kept being born every two to three years. That house came to feel quite small indeed once three people inhabited each bedroom. As the number of bodies increased, so, too, did the financial and physical strain, shared by all except the very youngest, of keeping everyone fed.

Jackie knew from a young age that she didn't want a big family. As a girl, in church and school lessons, she was taught that Love was a boundless and ever-expanding entity. As she grew into her teens and found herself increasingly responsible for taking care of a generation of children she hadn't herself conceived, she learned that there were limitations even to Love. She understood those limitations definitively: her mother out for milk, her father working a second job, her two older siblings gone with friends, and fifteen-year-old Jackie in the living room, tasked with keeping six stir-crazy little brothers and sisters from breaking anything, including their own bones. She didn't have enough Love in her to avoid losing her mind at certain points. And in the back of that mind lay the knowledge that once she'd seen all those children grown and positioned out there in the world, the time would come not long thereafter when she'd be responsible for her parents in their place.

She wanted a family of two children, that was all: two children who would be hers, plus a man capable of fathering and providing for them adequately.

Excerpted from The Short and Tragic Life of Robert Peace: A Brilliant Young Man Who Left Newark for the Ivy League by Jeff Hobbs. Copyright 2014 by Jeff Hobbs. Excerpted with permission by Scribner, a Division of Simon & Schuster, Inc.