The Life and Death of Derek Boogaard

Traces the career of the star player for the New York Rangers, from his childhood in Saskatchewan to his professional career, and reveals how a series of concussions led to his accidental death and subsequent investigations into systematic violence in contact sports.

NPR stories about Boy on Ice 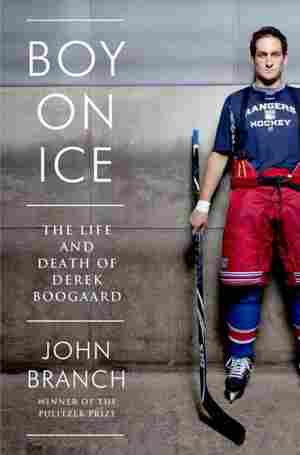 September 26, 2014 • In 2011, 28-year-old Derek Boogaard — one of the NHL's most fearsome fighters — was found dead of an accidental overdose of painkillers and alcohol. He also showed signs of serious brain injury.

The ice was covered with five-year-old boys. The goalies were immobilized with padded equipment, weighted like firs under heavy snowfall. The others, like Derek, glided in slow-motion packs, cautiously and unsteadily following the puck. Their sticks, nearly as tall as the boys, were handy to keep balance, either leaned upon like canes or held horizontally, like the balancing poles of tightrope walkers. They swung wildly when the children lost their balance and twirled to the ice, spilling like tops that had lost their momentum.

The little rink had the usual smatterings of family members, there to provide enthusiastic cheers and a quiet wave of recognition. Joanne Boogaard, pregnant with the family's fourth child, had stuffed Derek into his first hockey uniform. He was not yet old enough to dress himself, but he was big and strong enough to make it hard to wrestle his limbs into their proper holes.

His mother slid the boy's legs through the shorts and pulled the oversized blue-and-white jersey over his head. She tugged on the socks that stretched to his knees. She laced the hand-me-down skates that teetered under his weight. She buckled the helmet that protected his head.

Derek was always taller than the other kids, perennially found in the back row of the team picture. And as a young boy he was chubby, his round face crowned by dark, curly hair.

Derek Leendert Boogaard was born on June 23, 1982, at Saskatoon City Hospital. The middle name honored his father. The boy was 9 pounds, 51⁄2 ounces, the heftiest of the oncoming wave of Boogaard babies, and he stretched 211⁄2 inches. The family dressed him in a Toronto Maple Leafs onesie, and within weeks, doctors recommended solid baby food from a jar to quell his insatiable hunger.

And here he was, a few years later, an oversized toddler gazing at the faces in the bleachers until his eyes locked on those of his parents. The habit never faded.

"I remember when I would sit in the bench, I would always look for my mom and dad in the stands," Derek wrote 20 years later, in notes he recorded about his childhood.

"And of course I still do it in the NHL," he added in parentheses.

As he grew older, recognition came with a subtle nod. But at five, it came with a giant grin and a wild wave, like someone flagging a passing car. The puck was at the other end of the ice, but it did not matter. Derek saw his father. He saw his mother, pregnant with a little girl, and his two younger brothers, Ryan and Aaron Nicholas, propped onto the bleachers in little bundles.

Derek smiled. He waved. His parents waved back, returning the enthusiasm exponentially, then shooing the boy to turn the other way and chase the puck.

They were all there when Derek scored his first goal, sweeping the puck with his long stick past the goalie burdened by padding. It hardly mattered that the goal came against Derek's own team. The family cheered and laughed.

Hockey was something to do, something that nearly all the little boys and a growing number of little girls did, and Derek, in that respect, was no different than the rest. He was just like everyone else. That is why Derek liked it.

By sheer numbers, Saskatchewan does not produce the most NHL players. That is Ontario, by a large margin. By style, Saskatchewan does not produce the most talented playmakers, the smoothest skaters, or the biggest stars. But it does, with little argument, produce the toughest players — if not more than any other province, certainly the most per capita. Nearly any credible list of the fiercest, scrappiest players in hockey history will include a broad sample of Saskatchewan natives, from Eddie Shore to Dave "The Hammer" Schultz, Clark Gillies to Dave "Tiger" Williams, Joey Kocur to Wendel Clark, Theo Fleury to Dave Manson.

None of them played professionally in Saskatchewan, because the province has never had an NHL team. The closest are hundreds of miles away — in Winnipeg to the east and Calgary and Edmonton to the west. But that does not mean that Saskatchewan culture does not revolve largely around hockey. It simply means that culture revolves largely around children playing hockey — "minor hockey," in Canadian parlance.

That is why Len and Joanne placed young Derek into hockey programs, why they spent countless hours in chilly rinks sitting on wooden benches or standing on concrete floors, why they spent their money on hand-me-down equipment and registration fees, and why they spent their vacation budgets on long driving trips to attend hockey tournaments. They did everything they could to acclimate their children into the local culture — especially Derek.

"We just wanted him to be happy," Joanne said.

Like youth and high-school football in Texas or Nebraska, minor hockey in Saskatchewan sets the rhythm of the seasons as much as the planting and harvesting of the fields. Civic life in Saskatchewan, as in much of Canada, is not centered on schools or shopping malls, but the local rink. Hockey allows small communities and extended families to convene on pale, cold weekend days and dark, frozen weekday nights.

"The winters of my childhood were long, long seasons," reads a portion of Roch Carrier's short story "The Hockey Sweater," an excerpt of which was included on the back of the Canadian five-dollar bill for many years. "We lived in three places — the school, the church and the skating rink — but our real life was on the skating rink."

It was at one of those rinks, when Derek was five, that Len, his family new to the area, found himself seated in the bleachers behind a few other parents. Two women talked about the team roster and pointed out their sons. One pointed to the unknown boy with the big frame, taller than the rest.

"He's the worst player on the team," she said.

Hockey was a unit of measurement in Canada, and few grew as big as Derek.

From Boy On Ice, by John Branch. Published by W. W. Norton & Company 2014. Reprinted by permission of the publisher.