Lessons from the New Science of Adolescence

A leading expert on adolescence cites new research and describes how to raise happy, successful kids by helping parents navigate this challenging, but developmentally crucial, time through strategies that instill self-control during the teenage years.

NPR stories about Age of Opportunity

Q&A: Plumbing The Mysteries Of The Teenage Brain

October 4, 2014 • In Age of Opportunity, psychologist Larry Steinberg applies neuroscience to risk-taking, peer influence, the boredom of high school and other adolescent conundrums. 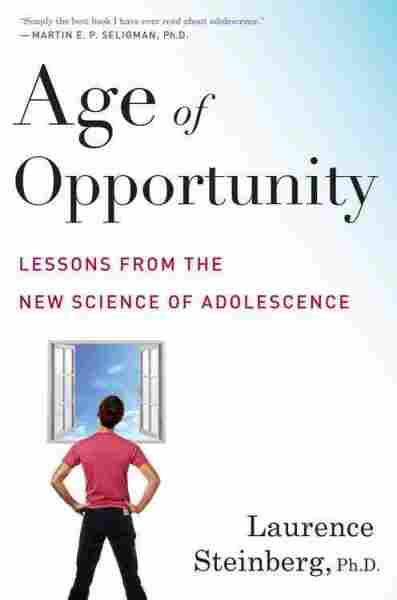 When a country's adolescents trail much of the world on measures of school achievement, but are among the world leaders in violence, unwanted pregnancy, STDs, abortion, binge drinking, marijuana use, obesity, and unhappiness, it is time to admit that something is wrong with the way that country is raising its young people.

That country is the United States.

It is not surprising that so many young people fare poorly in school or suffer from emotional or behavioral problems. Our current approach to raising adolescents reflects a mix of misunderstanding, uncertainty, and contradiction, where we frequently treat them as more mature than they really are, but just as frequently treat them as less so. A society that tries twelve-year-olds who commit serious crimes as adults because they're mature enough to "know better," but prohibits twenty-year-olds from buying alcohol because they are too immature to handle it, is deeply confused about how to treat people in this age range. Similarly, a society that lets sixteen-year-olds drive (statistically among the most dangerous activities there is), but doesn't allow them to see R-rated movies (an innocuous activity if there ever was one) is clueless.
The classic stereotype of adolescence is that it is a time characterized by confusion. Adolescence is a confusing time, but it's not the people in the midst of it who are confused. Indeed, adults are far more bewildered by adolescence than are young people themselves.

Some years ago, I received a call one evening from a friend who asked me to watch his ten-year-old son while he dashed out to take care of a problem involving his sixteen-year-old daughter, whom I'll call Stacie. She had just called to ask her dad to come and pick her up. She had been arrested for shoplifting—she had attempted to steal a bathing suit from one of the department stores that anchored the high-end mall not far from where we lived. She and her two friends, who also had stolen a few small things from the store, were being held at the local police station. My friend's wife was out of town on a business trip, and he couldn't leave his son home alone.

My friend and his daughter returned about an hour later, and he stood and stared at her as she walked through their foyer past me, avoiding any eye contact, and climbed up the stairs to her bedroom. No one said a word.
He and I sat down in the living room to try to make sense out of what had happened. His daughter was a good kid, a straight-A student who had never been in trouble. The family had plenty of money, and Stacie knew that if she needed clothes, all she had to do was ask. Why on earth would she steal something that she could have purchased so easily? When he had asked his daughter this on their ride home from the station, she had no answer. She just shrugged and looked out the window. My guess is that she had no idea. Nor was she especially concerned about finding out why.

My friend, also a psychologist, wanted Stacie to see a therapist so that she could better understand her behavior. At the time, I thought it was a reasonable request. Now, though, I'm not sure I would have encouraged this response. I'm all in favor of psychotherapy when a teenager has an obvious emotional or behavioral problem, like depression or chronic acting out. But no amount of probing Stacie's unconscious was going to uncover why she stole the bathing suit. She didn't take it because she was angry with her parents, or because she had low self-esteem, or because she had some psychological hole that needed to be filled with something tangible and immediately gratifying. Holding Stacie accountable for what she did was important. It would be appropriate to demand that she make amends to the store and to punish her in some way—ground her, withhold her allowance, temporarily take away some privilege.

But pushing her to understand what she did was futile. She shoplifted because when she and her friends were wandering through the store, stopping occasionally to experiment with cosmetics or rummage through the stacks of clothes on the display tables, it seemed like it might be fun to see if they could get away with it. It really wasn't any more complicated than that. Later in this book, I'll discuss how the research my colleagues and I are doing on the adolescent brain explains just why Stacie did what she did, and why it is pointless to seek the answer through introspection.

We need to start thinking about adolescence differently. Fortunately, over the past two decades, there has been tremendous growth in the scientific study of adolescence. The good news is that the accumulated knowledge, which comes from behavioral science, social science, and neuroscience, provides a sensible foundation that can help parents, teachers, employers, health care providers, and others who work with young people be better at what they do. Parent more intelligently. Teach more effectively. Supervise and work with young people in ways that are more likely to succeed. Understand why good kids like Stacie often do such obviously ill-advised things.

The bad news, though, is that a lot of this knowledge has yet to influence the ways in which we raise, educate, and treat young people.

This book synthesizes and explains what those of us who study adolescence have learned about two intersecting sets of changes. The first, in how adolescence as a stage of life has been transformed, demands that we radically reform how adolescents are raised, schooled, and viewed by society. The second, in our knowledge about adolescent development, exposes why what we've been doing hasn't been working, and reveals how we need to alter our policies and practices. My purpose is to start, stimulate, and inform a national conversation, grounded in the latest science, about how to improve the well-being of American adolescents.

A little about me: I am a developmental psychologist specializing in adolescence. Over the course of my forty years in this field, I have conducted research on tens of thousands of young people, across the United States and around the world. These studies have been funded by a wide variety of organizations, from public agencies like the National Institutes of Health to private philanthropies like the MacArthur Foundation.

Many books about teenagers are published every year that are based mainly in the author's experiences as a parent, teacher, or clinician. In contrast, I approach the topic from the perspective of a researcher, albeit one who also has been the parent of a teenager. This is not to say that personal observations or case studies are without value, only that they often tell just a small part of what is usually a very complicated story. Simply put, I place more weight on objective, scientific evidence than on anecdotes.

The studies in which I've been involved have included young people from all ethnic groups and all walks of life—from affluent suburban teens and rural adolescents to inner-city youth who come from some of the poorest and most dangerous communities in America. They have included young people who are suffering from emotional or behavioral problems as well as those who are flourishing psychologically. I've done research on teenagers who are lucky enough to attend some of the nation's finest private schools and on their same-aged peers who spend their days incarcerated in jail or prison. The research projects I've helped to direct have run the gamut from studies of small samples that use techniques like brain imaging or face-to-face interviewing to studies of thousands of adolescents, utilizing information from questionnaires. The basis for this book is a mix of my own research and that conducted by other scientists, often working from other disciplines. In the pages that follow I draw extensively on psychological research, but I also look at what we are learning about adolescence from sociology, history, education, medicine, law, criminology, and public health, and especially from neuroscience.

My use of brain science in this book deserves special mention. In the last few years, after enjoying a period of uncritical acceptance, the use of neuroscience to explain everyday behavior has come under attack. Its critics have pointed out—often correctly—that many of the claims put forth in popular-science books about the brain are exaggerated, that neuroscience frequently doesn't add to the explanation of human behavior beyond what we already know from psychology and other social sciences, and that our fascination with brain science is leading to a misunderstanding of important aspects of human nature. And they have rightly cautioned about the rush to embrace the promise of neuroscience to transform the ways in which various social institutions, like our courts, operate. I share many of these concerns.

My intention in grounding this book in the science of adolescent brain development is not to reduce adolescence to little more than a network of neurons, to suggest that everything that adolescents do is dictated by biology alone, or to imply that adolescents' behavior is fixed and not shaped by external forces. In fact, I argue just the opposite—that the main lesson we are learning from the study of adolescent brain development is that it is possible to influence young people's lives for the better. It was once said that advances in the study of genetics taught us just how important the environment is. What we're learning about the adolescent brain offers a similar message.