Accessibility links
Why We Lost NPR coverage of Why We Lost: A General's Inside Account of the Iraq and Afghanistan Wars by Daniel Bolger. News, author interviews, critics' picks and more.

A General's Inside Account of the Iraq and Afghanistan Wars

A three-star general offers an insider account of the U.S. wars in Iraq and Afghanistan, explaining how garbled intelligence, poor decision making, and no clear understanding of the enemy resulted in the failure of both missions.

NPR stories about Why We Lost 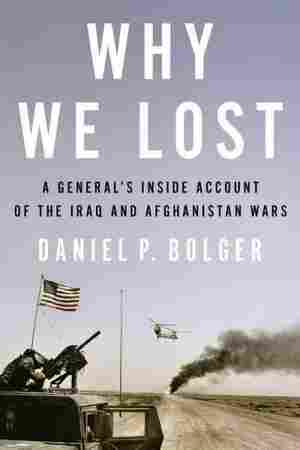 Excerpt: Why We Lost

I am a United States Army general, and I lost the Global War on Terrorism. It's like Alcoholics Anonymous; step one is admitting you have a problem. Well, I have a problem. So do my peers. And thanks to our problem, now all of America has a problem, to wit: two lost campaigns and a war gone awry.

We should have known this one was going to go bad when we couldn't even settle on a name. In the wake of the horrific al-Qaeda attacks on September 11, 2001, we tried out various labels. The guys in the Pentagon basement at first offered Operation Infinite Justice, which sounded fine, both almighty and righteous. Then various handwringers noted that it might upset the Muslims. These were presumably different kinds of followers of Islam than the nineteen zealots who had just slaughtered thousands of our fellow citizens. Well, better incoherent than insensitive, I guess.

So we settled on Operation Enduring Freedom (OEF). Our efforts in Afghanistan certainly lived up to the "enduring" part, dragging out longer than the ten-year Trojan War as we desperately tried to impose "freedom" on surly Pashtuns. The big guys in Washington then riffed off that OEF theme. We embarked on OEF-CCA (Caribbean and Central America), OEF-HOA (Horn of Africa, run out of Djibouti), OEF-K (Kyrgyzstan), OEF-P (the Philippines), OEF-PG (Pankisi Gorge, in the Caucasus republic of Georgia), and OEF-TS (Trans-Sahara, in northern Africa), among others not publicly acknowledged. We even found time, and nomenclature, for loosely related campaigns. One was the 2011 imbroglio in Libya known at the outset as Operation Odyssey Dawn, a good name for a Las Vegas pole dancer but a bit exotic for a military campaign. Cooler heads at NATO headquarters quickly substituted the boring but less provocative Unified Protector. We are a long way from Korean War operations like Killer and Ripper. You didn't have to guess what those names meant.

Still, that Enduring Freedom idea reflected the preferred brand. Few could have been much surprised when, in 2003, the next major campaign in the ill-named war drew the title Operation Iraqi Freedom. As in World War II, the Iraq intervention was seen, rightly, as yet another theater in what the military formally called the Global War on Terrorism (GWOT). Like many veterans, I earned campaign ribbons with that designation.

Other names were tried for the parts or the whole of the conflict. These included the Long War (true enough), the Afghan War, the Iraq War, the 9/11 War, the War on Terrorism (minus the Global), the War on Terror (minus the -ism), and — a real bureaucratic gem — the Overseas Contingency Operation. That inane euphemism arose as a result of a related phrase, the "man-caused disaster" on 9/11. Not one title for this war identified the enemy: anti-Western Islamists and the ramshackle, quasi-fascist Middle East states that enabled them.

So instead we waged a Global War on Terrorism against enemies referred to vaguely as terrorists, cowards, evildoers, and extremists. Although those descriptions were rather generic, somehow we always ended up going after the same old bunch of Islamists and their ilk. Our opponents had no illusions about who our targets were, even if some of us did. This GWOT sputtered along for years, with me in it, along with many others much more capable, brave, and distinguished.

I was never the overall commander in either Afghanistan or Iraq. You'd find me lower down on the food chain, but high enough. I commanded a one-star advisory team in Iraq in 2005–06, an Army division (about twenty thousand soldiers) in Baghdad in 2009–10, and a three-star advisory organization in Afghanistan in 2011–13. I was present when key decisions were made, delayed, or avoided. I made, delayed, or avoided a few myself. I got out on the ground a lot with small units as we patrolled and raided. Sometimes, I communed with the strategic-headquarters types in the morning and at sunset grubbed through a village with a rifle platoon. Now and then, Iraqi and Afghan insurgents tried to kill me. By the enemy's hand, abetted by my ignorance, my arrogance, and the inexorable fortunes of war, I lost eighty men and women under my charge; more than three times that number were wounded. Those sad losses are, to borrow the words of Robert E. Lee on that awful third day at Gettysburg, all my fault.

This history does not purport to tell the whole story of the war. At best, it's a start. A century hence, if our society still exists and still cares, much better chroniclers than I will still be laboring to render a complete account. All I can offer at this point is a study in what went right and what went wrong, colored — perhaps too much — by experience.

What went right involved the men and women who fought. Most of them were not Americans, as these wars among the people always feature a lot of locals helping the cause. Like our enemies, our regional comrades were almost all Muslims. In addition, both the Afghan and Iraq campaigns included partner countries, from old allies like Australia, Britain, and Canada to newer teammates like El Salvador, Korea, and Mongolia. All of that help meant a lot, and although we didn't always appreciate it enough at the time, we can never forget those others and their sacrifices. But in the end, the outcome rode on the United States.

This look at the war focuses on us, the Americans. We didn't start it, but once it began, we drove the pace and course of the conflict. At the tactical level — Army-speak for the realm of vicious firefights and night raids — the courage, discipline, and lethality of our Americans in uniform stand with anything accomplished in the Civil War, both world wars, Korea, or Vietnam. That all went very right.

What went wrong squandered the bravery, sweat, and blood of these fine Americans. Our primary failing in the war involved generalship. If you prefer the war-college lexicon, we — guys like me — demonstrated poor strategic and operational leadership. For soldiers, strategy and operational art translate to "the big picture" (your goal) and "the plan" (how you get there). We got both wrong, the latter more than the former. Some might blame the elected and appointed civilian leaders. There's enough fault to go around, and in this telling, the suits will get their share. But I know better, and so do the rest of the generals. We have been trained and educated all our lives on how to fight and win. This was our war to lose, and we did.

We should have known better. In the military schools, like West Point, Fort Leavenworth, Quantico, and Carlisle Barracks, soldiers study the work of the great thinkers who have wrestled with winning wars across the ages. Along with Thucydides, Julius Caesar, and Carl von Clausewitz, the instructors introduce the ancient wisdom of Sun Tzu, the Chinese general and theorist who penned his poetic, elliptical, sometimes cryptic Art of War some twenty-three centuries ago. Master Sun put it simply: "Know the enemy and know yourself; in a hundred battles you will never be in peril." We failed on both counts. I know I sure did. As generals, we did not know our enemy — never pinned him down, never focused our efforts, and got all too good at making new opponents before we'd handled the old ones.

We then added to our troubles by misusing the U.S. Armed Forces, which are designed, manned, and equipped for short, decisive, conventional conflict. Instead, certain of our tremendously able, disciplined troops, buoyed by dazzling early victories, we backed into not one but two long, indecisive counterinsurgent struggles ill suited to the nature of our forces. Time after time, despite the fact that I and my fellow generals saw it wasn't working, we failed to reconsider our basic assumptions. We failed to question our flawed understanding of our foe or ourselves. We simply asked for more time. Given enough months, then years, then decades — always just a few more, please — we trusted that our great men and women would pull it out. In the end, all the courage and skill in the world could not overcome ignorance and arrogance. As a general, I got it wrong. And I did so in the company of my peers.

Excerpted from Why We Lost: A General's Inside Account of the Iraq and Afghanistan Wars by Daniel Bolger. Copyright 2014 by Daniel Bolger. Used by permission of Houghton Mifflin Harcourt Publishing Company. All rights reserved.