Presents a unique view of modern German history in a novel relating five different stories of the possible lives and deaths at varying stages of maturity experienced by a single character. Translated by Susan Bernofsky.

NPR stories about The End of Days 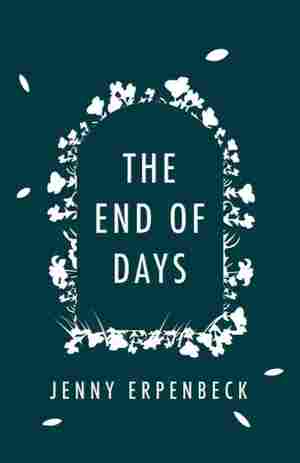 November 9, 2014 • German author Jenny Erpenbeck's new novel grapples with the classic question: What if? What if one choice, one event goes differently, and the whole course of your life changes?

Excerpt: The End Of Days

The Lord gave, and the Lord has taken away, her grandmother said to her at the edge of the grave. But that wasn't right, because the Lord had taken away much more than had been there to start with, and everything her child might have become was now lying there at the bottom of the pit, waiting to be covered up. Three handfuls of dirt, and the little girl running off to school with her satchel on her back now lay there in the ground, her satchel bouncing up and down as she runs ever farther; three handfuls of dirt, and the ten-year-old playing the piano with pale fingers lay there; three handfuls, and the adolescent girl men would turn to stare at as she passed because of her bright coppery hair was interred; three handfuls tossed down into the grave, and now even the grown woman who would have come to her aid when she herself had begun to move slowly, taking some task out of her hands with the words: oh, Mother — she too was slowly being suffocated by the dirt falling into her mouth. Beneath three handfuls of dirt, an old woman lay there in the grave, a woman who herself had begun to move slowly, a woman to whom another young woman, or a son, might at times have said: oh, Mother — now she too was waiting to have dirt thrown on top of her until eventually the grave would be full again, in fact even a bit fuller than full, since after all the mound of earth on a grave is always round on top because of the body underneath, even if the body lies far below the surface, where no one can see. The body of an infant that has died unexpectedly produces hardly any roundness at all. But really the mound ought to be as huge as the Alps, she thinks, even though she's never seen the Alps with her own eyes.

She sits on the very same footstool she always used to sit on as a child when her grandmother was telling stories. This footstool was the one thing she asked for when her grandmother offered to give her something for her new home. She sits in the hall on this footstool, leaning against the wall with her eyes closed, not touching the food and drink a friend has set before her. For seven days she will now sit like this. Her husband tried to pull her to her feet, but he couldn't manage it against her will. When the door clicked shut behind him, she was glad. Just this past Friday, the infant's great-grandmother had stroked the sleeping child's head, calling her maideleh, little girl. She herself, by giving birth to the child, had turned her grandmother into a great-grandmother and her mother into a grandmother, but now all these transformations have been reversed. The day before yesterday, her mother — who at the time could still be called a grandmother — had brought her a woolen blanket to wrap herself in when she went walking in the park with her baby on cold days. In the middle of the night, her husband had shouted at her to do something. But she hadn't known what to do in a situation like this. After his shouting, and after the few minutes in the middle of the night when she hadn't known what to do, and after this one moment when her husband too hadn't known what to do, he had not spoken another word to her. In her distress, she'd run to her mother, who now was no longer a grandmother, and her mother had told her to go back home and wait, she would send help. While her husband was pacing up and down the living room, she hadn't dared to touch her child again. She had carried all the buckets of water out of the house and emptied them, had draped a sheet over the hallway mirror, flung open the windows in the room where the child lay to let the night in and then sat down beside the cradle. With these gestures she had called to memory that part of life that is inhabited by human beings. But what had happened right here in her own home not quite one hour before was something no human hand could grasp.

That's just how it had been when her child was born, not even eight months before. After a night, a day, and another night during which the child had not arrived, she had wanted to die. That's how far she had withdrawn from life during those hours: from her husband, who was waiting outside, from her mother, who sat on a chair in the corner of the room, from the midwife, who was fussing about with bowls of water and towels, and above all from this child that supposedly was there inside her but had wedged itself into invisibility. In the morning after the birth she then watched from her bed as everyone simply went about doing what was needed: Her mother, who had now been transformed into a grandmother, received a friend who had arrived to offer congratulations, and her grandmother, now transformed into a great-grandmother, brought the amulets printed with Psalm 21 to hang around the room and a cake fresh from the oven, and her husband had gone to the inn to drink the child's health. She herself was holding the baby in her arms, and the baby was wearing the linens that she, her mother and her grandmother had embroidered in the months preceding the birth.

There were rules even for what was happening now. The people her mother had sent arrived at dawn, took the baby from its cradle, wrapped it in a cloth and laid it on a large bier. The bundle was so small and light that one of them had to hold it in place as they descended the stairs, otherwise it would have rolled off. Zay moykhl un fal mir mayne trep nit arunter. Do me a favor, don't go falling down the stairs. A favor. She knew the baby had to be buried before the day was out.