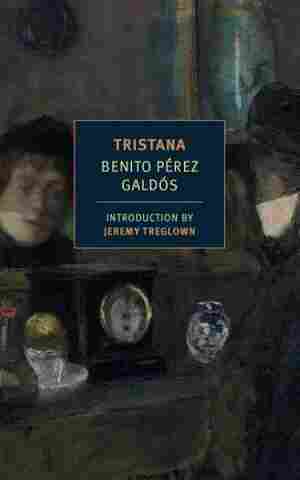 And the thousand and one things Tristana learned during that time, without anyone having to teach her, was the art of dissembling, making use of the ductility of words, adding flexible springs to the mechanism of life, dampers to muffle the noise, the kind of skillful deviations from the rectilinear path that are almost always dangerous. For, without either of them realizing it, Don Lope had made her his pupil, and some of the ideas that were now blooming afresh in her young mind sprang from the seedbed of her lover's and, alas for her, her teacher's mind. Tristana was at the age and season of life when ideas stick, when the most serious contagions of personal vocabulary, manners, and even character occur.

The young lady and the maid became close friends. Without the company and care of Saturna, Tristana's life would have been intolerable. They chatted while they worked and, when they rested, chatted some more. Saturna told her about her life, painting a genuinely realistic picture of the world and of men, neither blackening nor poeticizing either; and Tristana, who barely had a past life to recount, threw herself into the empty spaces of supposition and presumption, building castles for her future life, the way children do out of a few bricks and some earth. History and poetry came together in happy marriage. Saturna taught and Don Lope's little girl created, basing her bold ideals on the other woman's deeds.

"Look," Tristana would say to Saturna, who was more true friend than servant, "not everything that perverse man teaches us is nonsense, and there's more to some of what he says than meets the eye. Because you can't deny he has talent. For example, what he says about matrimony is absolutely right, don't you think? For my part—and I know you'll tell me off for this — I think the whole idea of chaining yourself to another person for the rest of your life is the invention of the devil. Don't you agree? You'll laugh when I tell you that I never intend to marry, that I'd like to remain forever free. I know what you're thinking, that I'm worrying needlessly, because after what this man has done to me and having no money of my own, no one's going to want to take me anyway. Isn't that right?"

"No, Señorita, I wasn't thinking that at all," Saturna replied at once. "There's a pair of trousers for every occasion, and that includes marriage. I was married once myself, and while I don't regret it one bit, I certainly wouldn't bother going to the altar again. Yes, freedom, Señorita, that's the word, although it isn't one that sounds good in a woman's mouth. You know what they call women who kick over the traces, don't you? They call them free — free and easy. So if you want to preserve your reputation, you have to submit to a little slavery. If women had trades and careers, as all those rascally men do, that would be another matter. But there are only three careers open to those who wear skirts: marriage, which is a career of sorts; the theater...working as an actress, which isn't a bad way of earning your living; and...well, I'd rather not mention the third one. I'll leave that to your imagination."

"Well, given the choice, I don't much like the first, still less the third, but I would certainly take up the second if I had any talent, except I really don't think I have. I know it's hard to be free — and honest. And what does a woman with no income live on? If they'd let us be doctors, lawyers, even pharmacists, or scribes, if not government ministers or senators, then we would be able to manage, but sewing? How many stitches would you have to sew in order to maintain a household? When I think what will become of me, I feel like crying. If I could be a nun, I'd be applying for a place right now, but I couldn't stand being shut up for the rest of my life. I want to live, to see the world and find out why we're here. Yes, I want to live and be free. Do you think a woman could become a painter and earn money painting pretty pictures? Paintings are expensive. My father paid a thousand pesetas for one that was nothing but a few mountains in the background, four bare trees, and in the foreground a pond with two ducks on it. Or could a woman perhaps become a writer and write plays or prayer books or even fables? That seems easy enough to me. These last few nights, lying awake and not knowing how to fill the time, I've invented all kinds of dramas, some that would make you cry and others that would make you laugh, and stories with complicated plots and bursting with tremendous passions, and I don't know what else. The trouble is I can't write, I mean, not neatly, and I make all kinds of grammatical errors and even spelling mistakes. But ideas, if they are ideas, I've no shortage of them."

"Ah, Señorita," said Saturna, smiling and raising her fine dark eyes from the stocking she was darning, "you are much deceived if you think that something like that would be enough to feed a free and honest lady! That's for men to do, and even then...the ones who live solely on their imaginations never get fat. They may use feather quills, but when it comes to feathering their own nests, they don't stand a chance. For example, Pepe Ruiz, my late husband's foster brother, who knows about these things because he works in the foundry where they make the lead letters for printing presses, he always used to say that it's nothing but hunger and poverty for people who live by the pen, and that in Spain you don't earn your daily bread by the sweat of your brow but with your tongue, meaning that the only ones who get rich are the politicians who spend their lives speechifying. Brain work? Forget it! Dramas and stories and books that make you laugh and cry? Mere talk. The people who write those things won't earn enough to feed themselves unless they've got friends in high places. That's how things work in gov'ment."

"Well, do you know what I think?" said Tristana with great feeling. "I think I could make a go of it in government or politics too. No, don't laugh. I know how to make speeches. It's really easy. I would just have to read a few reports of the debates in parliament and I could cobble together enough words to fill half a newspaper."

"No, you have to be a man to do that, Señorita! Our petticoats get in the way, just like they do when it comes to riding a horse."