A Novella and Stories

Collects a novella and seven short stories, including "Confidential Informant," in which a claims investigator follows a supposedly dead man from Miami to Brazil.

NPR stories about The Martini Shot 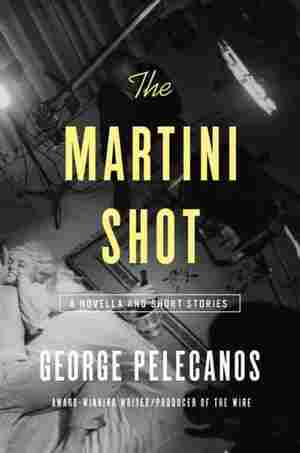 January 6, 2015 • In his new collection of short stories and a novella, Pelecanos explores crime, adoption and writing from an African-American point of view. He says he's "aware of the responsibility" to get it right.

Let me try to paint a picture, so you can see in your head the way it is for me right now. I got this little one-room place I rent from some old lady. A Murphy bed and a table, an icebox and a stove. I got a radio I bought for a dollar and ninety-nine. I wash my clothes in a tub, and afterward I hang the roúcha on a cord I stretched across the room. There's a bunch of clothes, pantalóni and one of my work shirts and my vrakia and socks, on there now. I'm sitting here at the table in my union suit. I'm smoking a Fatima and drinking a cold bottle of Abner-Drury beer. I'm looking at my hands. I got blood underneath my fingernails. I washed real good, but it was hard to get it all.

It's five, five thirty in the morning. Let me go back some, to show how I got to where I am tonight.

What's it been, four years since I came over? The boat ride was a boat ride, so I'll skip that part. I'll start in America.

When I got to Ellis Island, I came straight down to Washington to stay with my cousin Toula and her husband, Aris. Aris had a fruit cart down on Pennsylvania Avenue, around 17th. Toula's father owed my father some lefta from back in the village, so it was all set up. She offered me a room until I could get on my feet. Aris wasn't happy about it, but I didn't give a good goddamn what he was happy about. Toula's father should have paid his debt.

Toula and Aris had a place in Chinatown. It wasn't just for Chinese. Italians, Irish, Polacks, and Greeks lived there, too. Everyone was poor except the criminals. The Chinamen controlled the gambling, the whores, and the opium. All the business got done in the back of laundries and in the restaurants. The Chinks didn't bother no one if they didn't get bothered themselves.

Toula's apartment was in a house right on H Street. You had to walk up three floors to get to it. I didn't mind it. The milkman did it every day, and the old Jew who collected the rent managed to do it, too. I figured, so could I.

My room was small, so small you couldn't shut the door all the way when the bed was down. There was only one toilet in the place, and they had put a curtain by it, the kind you hang on a shower. You had to close it around you when you wanted to shit. Like I say, it wasn't a nice place or nothing like it, but it was okay. It was free.

But nothing's free, my father always said. Toula's husband, Aris, made me pay from the first day I moved in. Never had a good word to say to me, never mentioned me to no one for a job. He was a sonofabitch, that one. Dark, with a hook in his nose — looked like he had some Turkish blood in him. I wouldn't be surprised if the gamoto was a Turk. I didn't like the way he talked to my cousin, either, 'specially when he drank. And this malaka drank every night. I'd sit in my room and listen to him raise his voice at her, and then later I could hear him fucking her on their bed. I couldn't stand it, I'm telling you, and me without a woman myself. I didn't have no job then so I couldn't even buy a whore. I thought I was gonna go nuts.

Then one day I was talking to this guy, Dimitri Karras, lived in the 606 building on H. He told me about a janitor's job opened up at St. Mary's, the church where his son, Panayoti, and most of the neighborhood kids went to Catholic school.

I put some Wildroot tonic in my hair, walked over to the church, and talked to the head nun. I don't know, she musta liked me or something, 'cause I got the job. I had to lie a little about being a handyman. I wasn't no engineer, but I figured, what the hell, the furnace goes out you light it again, god- damn.

My deal was simple. I got a room in the basement and a coupla meals a day. Pennies other than that, but I didn't mind, not then. Hell, it was better than living in some Hoover Hotel. And it got me away from that bastard Aris. Toula cried when I left, so I gave her a hug. I didn't say nothing to Aris.

I worked at St. Mary's about two years. The work was never hard. I knew the kids and most of their fathers: Karras, Angelos, Nicodemus, Recevo, Damiano, Carchedi. I watched the boys grow. I didn't look the nuns in the eyes when I talked to them so they wouldn't get the wrong idea. Once or twice I treated myself to one of the whores over at the Eastern House. Mostly, down in the basement, I played with my poutso. I put it out of my mind that I was jerking off in church.

Meanwhile, I tried to make myself better. I took English classes at St. Sophia, the Greek Orthodox church on 8th and L. I bought a blue serge suit at Harry Kaufman's on 7th Street, on sale for eleven dollars and seventy-five. The Jew tailor let me pay for it a little bit at a time. Now when I went to St. Sophia for the Sunday service I wouldn't be ashamed.

I liked to go to church. Not for religion, nothing like that.

Sure, I wear a stavro, but everyone wears a cross. That's just superstition. I don't love God, but I'm afraid of him. So I went to church just in case, and also to look at the girls. I liked to see 'em all dressed up.