My Story of the 1965 Selma Voting Rights March

A 50th-anniversary tribute shares the story of the youngest person to complete the momentous march from Selma, Ala., to Montgomery, describing her frequent imprisonments for her participation in nonviolent demonstrations and how she felt about her involvement in historic civil rights events.

NPR stories about Turning 15 on the Road to Freedom 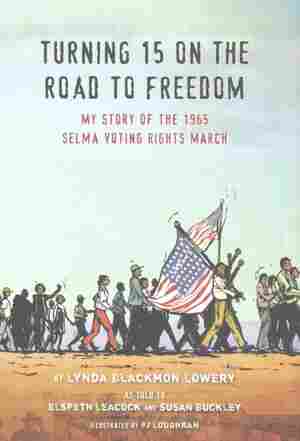 January 17, 2015 • Lynda Blackmon Lowery was still a child when she joined the legendary 1965 march. Now she's written a book for young readers about the experience, called Turning 15 On The Road To Freedom.

Excerpt: Turning 15 On The Road To Freedom

"Who is with me?" Dr. King asked, and all of us stood up, clapping. By the time we left that meeting, Dr. King had a commitment from me and everyone else in that church to do whatever it would take, nonviolently, to get the right to vote.

At that time I was already in the move­ment—the civil rights movement. I was mostly following the high school kids around—especially Bettie Fikes. She had this beautiful voice and I wanted to sing like her. Bettie and her friends were trying to integrate Selma by going to whites-only places. They sat at the whites-only Dairy Queen and the lunch counter at Woolworth's department store. They tried to sit downstairs at the movie theater. (Blacks could only sit in the balcony then.)

They said I couldn't take part in these sit-ins because I was too young, but I had a job to do. My job was to go for help. I was called the "gopher," because I always had to "go for" someone's mama when Bettie and her friends were put in jail.

That all changed on January 2, 1965. That's when Dr. King came back to Selma for a big mass meeting at Brown Chapel. We called it Emancipation Day because it was all about freedom. There were about seven hundred people there, and I was one of them. It was an awesome thing, a fearsome thing to see so many people. They had come from all around. And they had to travel some dangerous roads to get to Selma—little country roads where the Ku Klux Klan was riding around.

The music was fantastic. By then we had formed a freedom choir, and I was part of it. I got to sing in the choir with Bettie Fikes, and you know how I felt about that.

When Dr. King walked in, everyone stood and cheered. He talked about the vote and how we would get it. He told us we must be ready to march. His voice grew louder as he continued. "We must be ready to go to jail by the thou­sands." By the end he shouted, "Our cry . . . is a simple one. Give us the ballot!"