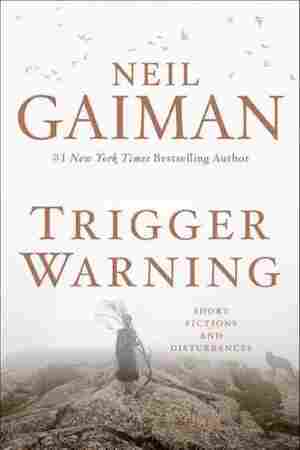 February 15, 2015 • Trigger warnings caution readers to tread carefully and Neil Gaiman encourages those who pick up his latest collection of "short fictions and disturbances" to do the same.

February 4, 2015 • "Consider yourself warned," Gaiman says in his introduction. Many of these stories end badly for the people in them. But for the reader, Trigger Warning is a haunted, bloody, twisted pleasure.

An excerpt from the introduction to Neil Gaiman's new short fiction collection:

There are things that upset us. That's not quite what we're talking about here, though. I'm thinking about those images or words or ideas that drop like trapdoors beneath us, throwing us out of our safe, sane world into a place much more dark and less welcoming. Our hearts skip a ratatat drumbeat in our chests, and we fight for breath. Blood retreats from our faces and our fingers, leaving us pale and gasping and shocked.

And what we learn about ourselves in those moments, where the trigger has been squeezed, is this: the past is not dead. There are things that wait for us, patiently, in the dark corridors of our lives. We think we have moved on, put them out of mind, left them to desiccate and shrivel and blow away; but we are wrong. They have been waiting there in the darkness, working out, practicing their most vicious blows, their sharp hard thoughtless punches into the gut, killing time until we came back that way.

The monsters in our cupboards and our minds are always there in the darkness, like mould beneath the floorboards and behind the wallpaper, and there is so much darkness, an inexhaustible supply of darkness. The universe is amply supplied with night.

What do we need to be warned about? We each have our little triggers.

I first encountered the phrase Trigger Warning on the Internet, where it existed primarily to warn people of links to images or ideas that could upset them and trigger flashbacks or anxiety or terror, in order that the images or ideas could be filtered out of a feed, or that the person reading could be mentally prepared before encountering them.

I was fascinated when I learned that trigger warnings had crossed the divide from the internet to the world of things you could touch. Several colleges, it was announced, were considering putting trigger warnings on works of literature, art or film, to warn students of what was waiting for them, an idea that I found myself simultaneously warming to (of course you want to let people who may be distressed that this might distress them) while at the same time being deeply troubled by it: when I wrote Sandman and it was being published as a monthly comic, it had a warning on each issue, telling the world it was Suggested for Mature Readers, which I thought was wise. It told potential readers that this was not a children's comic and it might contain images or ideas that could be troubling, and also suggests that if you are mature (whatever that happens to means) you are on your own. As for what they would find that might disturb them, or shake them, or make them think something they had never thought before, I felt that that was their own look out. We are mature, we decide what we read or do not read.

But so much of what we read as adults should be read, I think, with no warnings or alerts beyond, perhaps: we need to find out what fiction is, what it means, to us, an experience that is going to be unlike anyone else's experience of the story.

We build the stories in our heads. We take words, and we give them power, and we look out through other eyes, and we see, and experience, what they see. I wonder, Are fictions safe places? And then I ask myself, Should they be safe places? There are stories I read as a child I wished, once I had read them, that I had never encountered, because I was not ready for them and they upset me: stories which contained helplessness, in which people were embarrassed, or mutilated, in which adults were made vulnerable and parents could be of no assistance. They troubled me and haunted my nightmares and my daydreams, worried and upset me on profound levels, but they also taught me that, if I was going to read fiction, sometimes I would only know what my comfort zone was by leaving it; and now, as an adult, I would not erase the experience of having read them if I could.

There are still things that profoundly upset me when I encounter them, whether it's on the web or the word or in the world. They never get easier, never stop my heart from trip-trapping, never let me escape, this time, unscathed. But they teach me things, and they open my eyes, and if they hurt, they hurt in ways that make me think and grow and change.

I wondered, reading about the college discussions, whether, one day, people would put a trigger warning on my fiction. I wondered whether or not they would be justified in doing it. And then I decided to do it first.

There are things in this book, as in life, that might upset you. There is death and pain in here, tears and discomfort, violence of all kinds, cruelty, even abuse. There is kindness, too, I hope, sometimes. Even a handful of happy endings. (Few stories end unhappily for all participants, after all.) And there's more than that: I know a lady called Rocky who is upset by tentacles, and who genuinely needs warnings for things that have tentacles in them, especially tentacles with suckers, and who, confronted with an unexpected squid or octopus, will dive, shaking, behind the nearest sofa. There is an enormous tentacle somewhere in these pages.

Many of those stories end badly for at least one of the people in them. Consider yourself warned.

From the book TRIGGER WARNING: Short Fictions and Disturbances by Neil Gaiman. Copyright 2015 by Neil Gaiman. William Morrow, an imprint of HarperCollins Publishers. Reprinted by permission.