Johns Hopkins neuroscientist David J. Linden examines how our sense of touch and emotional responses affect our social interactions as well as our general health and development. In Touch, he explains how sensory and emotional context work together to distinguish between perceptions of what feels good and what feels bad. 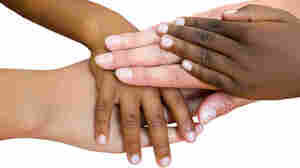 February 20, 2015 • David J. Linden's new book on touch brings into focus all the things we still don't understand about the neural basis of this sense, says commentator Alva Noë. 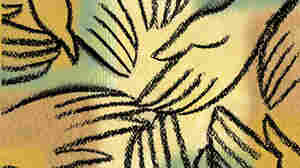 Fingertips, David Linden explains, are filled with different sorts of sensors for detecting different types of touch, including one that notes texture and fine little bumps. Another type perks up at vibration. Laughing Stock/Corbis hide caption

February 3, 2015 • In his latest book, neuroscientist David Linden explains the science of touch. He tells Fresh Air how pain protects, why fingertips are so sensitive and why you can't read Braille with your genitals.

We're eight teenage campers huddled around a fire ring, late at night. Piled up like puppies, spilling over rocks and stumps and the dusty bare dirt of the Santa Monica mountains, we smell of black sage and acorns and unwashed T-shirts. With no adults in sight and the soft cover of darkness, we give voice to our innermost pubescent thoughts.

"Okay...this is for Caroline. Would you rather give an open-mouth kiss to the camp director or eat a live cockroach?"

Our voices rise in a disgusted, delighted Greek chorus, "Eeeeeeeeeeeew!"

"You're so gross, Sam. I'm not answering that one."

"But you have to. Those are the rules."

"You're so prickly. I didn't mean to hurt your feelings."

"Okay, here's a clean one. Would you rather die of cold in Antarctica or heat in the Sahara Desert?"

"I'm not allowed to bring a parka to Antarctica?"

"Then I choose the desert. I want to go out with a good tan."

Good-natured howling erupts. Caroline raises her arm and shimmies, vamping it up.

Sam smiled. "You're so vain. And...I've gotta go." Everyone knows that this is bogus. It's obvious that he's crazy about Caroline.

"No, you don't, you slippery sonofabitch. Now it's my turn. You must give up all of your sense except one. Which do you pick to save?"

"Oh, man. That's rough. I'd keep sight. Then, at least I could get around. Uh, no, hearing—I need my music. Shit. I dunno. That would just suck."

"I'm touched by your concern."

Later, lying in my sleeping bag and mulling over this flirtatious banter, I was puzzled. Flush with hormones, we all hungered for interpersonal touch, for kisses and caresses and more. I was typical of this group, so consumed with the idea of holding and kissing a lovely dark-haired girl named Lorelei that I could barely speak. Touch was central to our obsessions and fantasies, yet none of us ever chose to preserve it when, in the nights that followed, Caroline's question about losing one of our senses returned in the "Would you rather...?" game. Did we simply not think the ramifications through? It's certainly true that a bunch of horny sleep-deprived amped-up teenagers sitting around a campfire is not the ideal forum for contemplation. Or was it that we could easily imagine what it would be like to experience the loss of sight or hearing (we had all shut our eyes or plugged our ears), or even of taste or smell, yet none of us had ever actually been able to re-create the sensation of the loss of touch. Perhaps touch was woven so deeply into our sense of self that we could not truly imagine life without it. Years later when I read Lolita, I discovered that Vladimir Nabokov had, as usual, raised this very issue many years before: "It is strange that the tactile sense, which is so infinitely less precious to men than sight, becomes at critical moments our main, if not only, handle to reality."

For Nabokov's Humbert Humbert, touch was so infinitely precious an experience that even the merest tactile contact with his beloved Lolita aroused overwhelming passions. For all of us, the experience of touch is intrinsically emotional, and this is reflected in common expressions in English. Read the dialogue that opens this chapter and notice that phrases like "I'm touched by your concern" or "I didn't mean to hurt your feelings" and texture metaphors like "you're so prickly" or "that's rough" or "you slippery sonofabitch" didn't stand out at all. We are completely accustomed to describing a wide range of human emotions, actions, and personalities in terms of our skin senses:

"I was touched by her thoughtfulness."

"It's a sticky situation."

"That's enough of that coarse language."

"That is one hairy problem."

"He rubs me the wrong way."

In everyday speech, the tactile is so entangled with the emotional that when we encounter someone who is emotionally clumsy, we call him tactless: Literally, he lacks touch.

This may seem like a silly question, but it's not: Why are emotions called feelings and not sightings or smellings? Do touch metaphors really tell us something about the skin senses and their relationship to human cognition, or are they merely a common usage of present-day English? In fact, the constructions "I'm touched" to mean "I'm emotionally affected" and "my feelings" to mean "my tender emotions" have been in use in the language since at least the late thirteenth century. And such expressions are not unique to English, or even the Indo-European language group, as they are found in tongues as diverse as Basque and Chinese.

From Touch by David J. Linden, published by Viking, an imprint of Penguin Publishing Group, a division of Penguin Random House LLC. Copyright by David Linden, 2015.