Kenya Curtis, an African-American girl coming of age in Philadelphia in the late 1980s and early '90s, grows increasingly disgruntled by her inability to find any place, thing or person that feels like home.

August 19, 2016 • Asali Solomon's novel is about a girl growing up in West Philadelphia whose parents were black nationalists. "My parents taught us to revere Africa," she says. Originally broadcast Feb. 5, 2015. 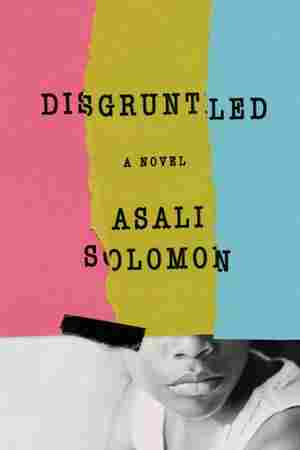 February 5, 2015 • Asali Solomon's novel is about a girl growing up in West Philadelphia whose parents were black nationalists. "My parents taught us to revere Africa — people at school made fun of Africa," she says.

In the first grade at Henry Charles Lea School in West Philadelphia, when Kenya told kids that she celebrated Kwanzaa, no one knew what she was talking about. By the third grade, led by the tiny tyrant L'Tisha Simmons, the kids were calling her an African bootyscratcher and chanting to a conga line rhythm:

You don't get no pre-sents!

You don't get no pre-sents!

In fact, she did get presents on the last morning of Kwanzaa, seven days after Christmas. By the fourth grade Kenya was down to one friend.

It wasn't just the Kwanzaa problem. And anyway, she could have lied about Kwanzaa like she suspected Fatima McCullers did — Fatima, whose dad had dreadlocks and who always said "Christmas" and "Santa Claus" with a wavering inflection. It was also that she couldn't eat any pork, including the bologna sandwiches that were the everyday fare of the lunchroom — something to do with her father muttering that white people forced slaves to eat hog guts — though as far as Kenya could see, white people loved bologna enough to give it both a first and a second name. It was that she wasn't allowed to watch Gimme a Break!, Good Times, or Diff 'rent Strokes because, according to her mother, watching black people on TV acting the fool was worse than not watching any at all. It was that she was forbidden to actually speak the Pledge of Allegiance and had been directed to mouth it with her hand not actually touching her chest. It was that she had to call her father "Baba," and when she'd asked if she could call him "Daddy" like other people, it had triggered what seemed like days of lectures, during which Kenya learned to hate the phrase other people. It was that while her parents said grace like normal people, they directed it to the Creator instead of God. It was that she was never ever allowed to say nigger, even during the step where they had to say nigger boy. In fact, when she first heard someone say it in school — L'Tisha Simmons in the third grade — Kenya said "Oooooooooooh!" expecting everyone to join in. They didn't. Even Aliyah, the pale girl from Sudan (actual Africa — but no one called her a bootyscratcher!), with a long rope of hair, was laughing at her, and when Kenya pointed at L'Tisha, explaining, "She said the n-word!" they laughed even harder.

Kenya's one friend was Charlena Scott, who went to Lea and lived a few blocks away from her. She made Kenya look normal during the times of the year when no one was thinking about Christmas. Her parents were adherents to some off-shoot of the Seventh-day Adventists, and so she wore old lady's cat-eye glasses and long, dark skirts. Aside from the fact that she and Kenya were both forbidden to watch The Dukes of Hazzard (Charlena because it came on after nine o'clock, Kenya because according to her father it "declawed" the racist South), they had little in common. They were both "advanced" readers, but Charlena was more advanced than Kenya and had her own private reading group. She and the teacher, Mrs. Preston, drank cherry soda and casually conversed about the chapter book they were currently enjoying.

The point of being friends with Charlena was to have a partner for lunch, someone Kenya could walk with on the zoo trip, talk to at recess, someone she could sit with on the sidelines of Double Dutch, trying to make watching look fun. Charlena couldn't manage Double Dutch in her pioneer-length skirts and Kenya couldn't manage it at all. And sometimes when her father couldn't pick her up from school, Kenya had to go to Charlena's, because Charlena's mother got home earlier than either of Kenya's parents. Given the UNICEF poster — African wood sculpture–exotic-incense-smelling eccentricities of her house over on Irving Street (less tree-lined and prosperous-looking than Charlena's block), the arrangement was a relief.

Charlena always wanted to play Star Wars — one of the few movies that she'd seen. At least she claimed she'd seen it; her grasp of the plot seemed tenuous. She always insisted on being Darth Vader, declared Kenya Princess Leia, and said if Leia didn't kiss Darth Vader, Luke would be tortured.

Kenya hated to break character during these games, which offered a thrilling escape from real life, but she also hated Charlena's peanut butter-apple juice kisses, which were made worse by her heavy Darth Vader breathing. She played along the first few times, but she finally tried to fight back.

"I will keep my honor," declared Kenya, ducking the kiss. "And if you torture Luke," she cried, "I will swear to God a vengeance on your head!"

"No!" Charlena said in her own, rather than her Darth Vader, voice. "They have to kiss!"

Kenya gave in. When Charlena didn't get her way, the fun evaporated in a damp cloud of gloom. It was also true sometimes that Charlena would occasionally break away mid-kiss and fly off to pout for mysterious reasons.

"What is your problem?" blurted Kenya one afternoon after a particularly nauseating session of tongue kissing had failed to cheer Charlena.

Bored, but not quite ready to do math worksheets, Kenya watched Charlena fritter with the slats of the mint-green blinds and stare out onto the street. Kenya viewed the blinds with her usual sense of longing. For reasons that were never explained to her, and to the consternation of their neighbor Mrs. Osgood, her own parents had kept the boards on the bottom front windows that had "come with" their small row house.

"Do your parents ever fight?" Charlena asked, turning slowly from the window to face Kenya.

"Sometimes," Kenya said, her face suddenly burning. Did her parents fight? Not all the time, but when they did ... She recalled two Thanksgivings ago, when her father's "wino philosopher" friends, as her mother called them, mysteriously showed up around dinnertime and her mother broke a wooden spoon on a pot.

Charlena's eyes welled up. "I think mine are going to get a—a--divorce!"

Kenya sucked in air sharply. While many of the Lea kids were being raised by single mothers and grandmothers, an actual divorce seemed cataclysmic. It was something so dramatic they made movies, TV movies, and specials about it. In one of the movies her parents had for some reason allowed her to watch, there was a horrible courtroom scene where a judge made a sobbing boy choose which parent he liked better and which one he'd see only on weekends. He chose to live with his mother — and then his father died in a car accident.

Charlena started to cry and all Kenya could think to do was swat at her back. It was what her father would have done. She tried to picture her mother, but she would feel ridiculous crushing Charlena, who was nearly a head taller, into her skinny chest.

"I bet it's going to be okay," Kenya said, wanting to ask more about Charlena's parents and how they fought. She thought again about that Thanksgiving. She had been in the dining room, listening both to her father making a point about the decline of black music, playing snatches from record after record, and to her mother's voice from a distance, "Johnbrown, Johnbrown, Johnbrown ..." Kenya had yelled, "Baba," but he couldn't hear her. A few moments later, the spoon was in splinters and everyone heard her mother call her father the worst curse Kenya knew. In the heavy silence that followed, two of the winos fled. The stuffing, usually Kenya's favorite, tasted like chunks of dust that year. No one had mustered the courage to tell Sheila that there were bits of wood in her hair. Maybe Johnbrown had stayed in touch with those friends, but Kenya never saw them again.

"What makes you think it's going to be okay? You're just saying that," Charlena accused. "You don't even know my parents."

"Isn't divorce against your religion?"

"They're so strict with you. They have to be like that with themselves, too."

But in fact, Kenya thought it was only right that Charlena's mother should leave her father. She was beautiful in spite of the plain white blouses, long, dark skirts, and bun she had to wear because of her religion. Her skin looked like fudge; she had long, thick hair and spoke in a soft voice. Charlena's father, on the other hand, was tall with patchy hair, rusty skin, and a permanent frown.

As for her own parents, Kenya wasn't worried. Maybe they fought, but she couldn't imagine life without them fighting. She was sure that they couldn't imagine it either. They were her only family and each other's as well.