Title
She Weeps Each Time You're Born
Author
Quan Barry

The tumultuous history of reunified Vietnam is experienced by a young girl born with the ability to hear the voices of the dead. A first novel by the award-winning author of Water Puppets.

NPR stories about She Weeps Each Time You're Born 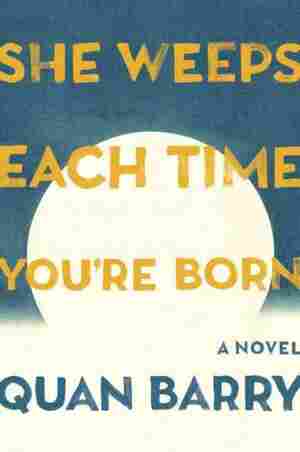 February 7, 2015 • Poet and author Quan Barry — born in Vietnam but raised in America — says she wants her new novel to help get rid of some of the preconceptions Americans have about Vietnam as a quagmire.

Excerpt: She Weeps Each Time You're Born 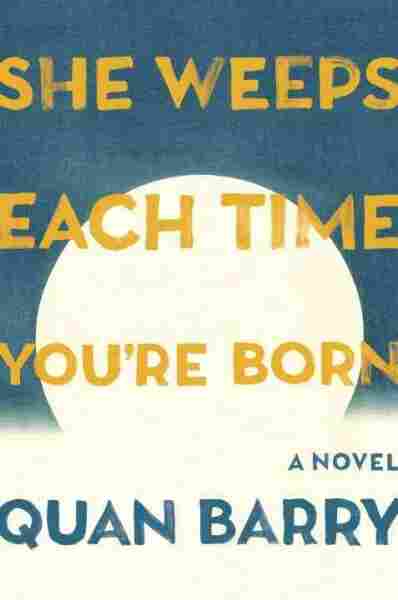 Sometimes things blow shut of their own accord. The way a door creaks on its splintery wooden hinges—pain in the very sound of it. How the pain comes fluttering up in the joints, the pain permanent like new teeth. This is a moment of thresholds. The sound of doors swinging wildly somewhere in the wind.

The bridge across the song ma had long since been destroyed, but the little basket boat was still sitting on the near shore, bobbing in the current. There were no oars, just a series of guide ropes one could use to pull the bamboo boat back and forth. This was the last place she'd seen him. More than eight months had passed. Little Mother still remembered the shape of Tu's neck under his hat as he pulled himself across the water, the birthmark gleaming on the edge of his hairline. They had walked to the river hand in hand through the dusk, the bats just starting to stir. Something buzzed in her ear, but she didn't swat it, not wanting him to remember her as anything less than stoic, Little Mother eager to demonstrate that she would be all right in his absence. They both knew the time had come for him to disappear, the war changing the land around them. As he slipped across the Song Ma, Tu didn't look back. The sound of water lapped against the sides of the boat as he melted into the landscape, her heart slipping away from her body.

Little Mother studied the sky. There was an hour left until sundown. The old medicine man had said it would come that night. There was nothing else to do. On the far shore the rope was fastened around an iron hook set deep in a rock. She found the other end where she had left it tied up to the roots of a mangrove tree. Water sloshed in the bottom of the boat, the water hot around her ankles as she stepped in. Swiftly she pulled herself across the river, though it was mostly the current that carried her. The water coursed so dull red and matte she couldn't see anything in it, not even her own reflection.

On the other side of the river she stepped out of the boat and crawled hand over hand up the bank. Just five months ago there had been a cluster of families living on both sides of the Song Ma. The families had made their living fishing and ferrying people and goods across the river. For the past few months the charred remains of their huts dotted the shoreline. Over time the blackened heaps looked less and less like the remains of houses. It was hard to say who'd done it with any certainty. Little Mother took a deep breath and held it as she hurried past without looking. The patriarch had gone running back into one of the burning huts to find his granddaughter, the thatched roof like a woman with her hair on fire. Neither the old man nor the girl were ever seen again. Little Mother half remembered meeting the little girl from time to time, her hair done in two mismatched braids, one longer than the other, a space where her front tooth was missing, the head of the new tooth just starting to show. The grandfather had been a fisherman. He was known far and wide for fishing with a snow-white cormorant, the bird an albino, its eyes a bloody pink. Until the fire, most nights the grandfather and the bird could be seen together floating on a simple raft, the old man's long gray beard in stark contrast to his bald head. In the weekly market Little Mother had heard that the man and his granddaughter were somewhere still walking the earth. She imagined meeting the two of them, the blue flames of their spirits roaming restlessly through the dark. From the look of things, with the next good rain the last of the wreckage would wash down into the river, everything as if nobody had ever lived there.

A half mile down the road Little Mother came across the carcass of a wild sow. Its teats gleamed like big brown buttons up and down its bloated gut. Most likely the creature had eaten something poisonous. There was no noticeable trauma, though its mouth gaped, its yellowed tusks long as fingers where the gums had receded. Little Mother wondered if she herself looked like that—gums drawn so far back her teeth as if twice as long.

By the trunk of a black palm she stopped to rest. In the distance the Truong Son Mountains were hazy with ash. It happened often enough that she had learned to sleep through it, the nightly rumble of distant planes. Each time it started, the night sky would light up. The next morning ash would shower down, a black confetti floating as far as Qui Nhon on the coast.

The moon was just on the edge of the horizon as Little Mother rounded the final bend, the sugar apples coming into view in the yard. The one-room she shared with Bà was west of the Song Ma in the southern corner of the province. The first few months of her marriage things had been quiet. Then a small weapons cache was found buried in a field outside Hau Bon. The farmer said he hadn't worked the field in years, that he left it fallow as a place for the spirits of the rice to live, and that everyone for miles around knew it, but he was carted off to Pleiku anyway. After that, everything changed. Evenings she would see people floating through the hamlet she had never seen before, their accents hard to place. Across the Song Ma a village chief was killed. Someone draped a sign around his neck. puppet. Then one by one Tu and the other men of fighting age disappeared, some like Tu joining the Vietcong out in the jungle, others just slipping away. The bombings in the Truong Son Mountains began to physically change their topography, the peaks leveled, helicopters landing at all hours. And now the whole fifty square miles west of the river had been declared a free-fire zone. The Americans ordered everyone out. Tu said the Americans were trying to stamp out the Vietcong by banishing the local people. No people meant no food, no aid. In a free-fire zone the Americans could shoot without asking. Anyone remaining was assumed to be VC. Bà had begged Little Mother to stay, saying they would be all right because they were harmless, two women in the middle of nowhere, and besides, how else would Tu know where to find them when he returned from the jungle? Most of the other villagers had left for Cong Heo, the strategic hamlet in Binh Dinh Province, though Cong Heo had long since fallen into disuse. Little Mother had heard there was a wooden fence with razor wire running along the top, a ring of bamboo stakes all around the compound, the stakes gone soft with rot.

As she entered the yard, she could see the door was open. Inside, a fire was burning in the fire pit, but the room was empty except for their few possessions—some cooking utensils and a pair of rice bowls stacked on a small table, Bà's hammock strung up under the window. The tin bucket they used to collect water from the creek on the other side of the orchard was missing, a ring left in the dirt where the bucket usually sat. Little Mother picked up her sleeping mat and unrolled it on the floor. Slowly she eased herself down and took off her non la. The money was there, but the flower was gone, its little pink bud like a mouth. She took a deep breath and held the hat up to the fire, searching it with her eyes for the words Tu had paid for, had chosen just for her, and how the artist had painstakingly woven them through the lining. In the long river, fish swim off without a trace.How the local people believed that a girl who wore a conical hat laced with poetry would become milder, more gentle, the girl effectively domesticated. Like a water buffalo when the farmer takes her newborn—how in her mourning for her baby, the water buffalo will do anything the farmer asks.

Little Mother could feel the hole where her heart should be. The poem was gone, the writing rubbed out from sweat and the daily friction of her head. Who tends the paddy / repairs the dike? She considered going back out into the fading light, the mosquitoes beginning to swarm, maybe even going all the way to the river to look for the missing flower she had been entrusted with, but outside the visible world exploded and the first pain hit.