The author of The Reluctant Fundamentalist offers essays that discuss the similarities and differences in everyday living between the three countries he was able to call home at different periods of his life: America, Pakistan and England.

NPR stories about Discontent and Its Civilizations 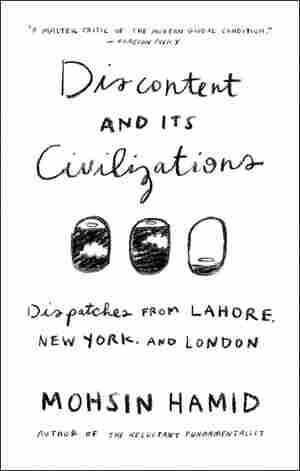 February 28, 2015 • Mohsin Hamid combines the personal and political in his new book, Discontent and Its Civilizations. NPR's Scott Simon talks with the Pakistani author about his new collection of essays.

February 18, 2015 • Mohsin Hamid's new collection plays on the title of Sigmund Freud's classic Civilization and Its Discontents, but critic Michael Schaub says these essays are both more personal and wider ranging.

Excerpt: Discontent And Its Civilizations 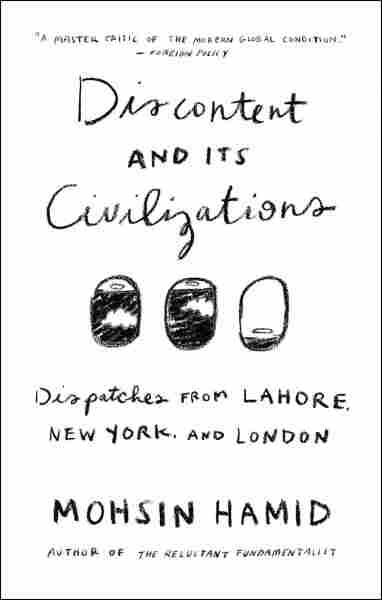 Looking back, it's obvious to me now that the Pakistan of my teens was bursting with art. I had a burly cousin who used to play (incongruously) with inks and watercolors in the afternoons when he got home from school. I had an aunt who was in the habit of telling over and over again the story of her random encounter with the famous artist Sadequain, an encounter that resulted in him executing what was surely his version of an autograph: a quick drawing depicting my aunt as a Nefertiti-necked goddess holding a flower above a line of calligraphy. I had seen the legendary painter Chughtai's long-eyed ladies smiling out from drawing room walls, offering half-lidded innuendoes to easily flustered young men like me. And I had in the backdrop of my youth the Lahore Museum, the marvelous old city, the trucks and cinema billboards covered in bold, pelvis-thrusting iconography.

But at the time, art felt to me like something that belonged either to the past or to other places, because my teens were in the 1980s, and Pakistan in the 1980s had the misfortune of being governed by a mustachioed dictator with dark bags under his eyes and a fondness for dystopian social reengineering. General Zia-ul-Haq claimed to be acting in the name of Islam, and even though the history of Islam in our part of the world stretched back over a thousand years, we were told that our Islam wasn't Islamic enough, indeed that we Muslims weren't Muslim enough, and that he would make of our Pakistan the land of the pure" that its name suggestedor ruin us all trying.

Under Zia, flogging, amputation, and stoning to death became statutory punishments. Acts disrespectful to symbols of Islam were criminalized. Public performances of dance by women were banned. News in Arabic, the language of the Koran but spoken by virtually no one in Pakistan, was given a prime-time slot on television. Thugs belonging to the student wings of religious parties seized control of many college campuses. Heroin and assault rifles flooded the streets, blowback" from Pakistan's alliance with the United States against the Soviets in Afghanistan. My parents reminisced about how much more liberal Lahore had been in their youth.

When General Zia was blown to bits shortly after my seventeenth birthday in 1988, he wasn't mourned, at least not by anyone I knew. I left for college in the United States a year later. There I met people who were studying photography and sculpture, and I myself enrolled in classes on creative writing. Without thinking about it, I supposed an education in these artistic" pursuits was something in which only affluent societies in the West could afford to invest, or, rather, that only the twin luxuries of material success and tolerance of free expression could provide the sort of soil in which an artistic education could thrive.

I was, of course, completely wrong. When I returned to Pakistan in 1993, I was working on what would become my first novel. I thought of writing as a transgressive act. I wrote at night, often from midnight to dawn, and in between writing sessions I would escape into the darkness with my friends. We drove around town in old Japanese cars, hung out on our rooftops, and searched for places beyond the reach of societal control or parental observation. Cheap local booze and even cheaper slabs of hash were the intoxicants of choice in that young urban scene, and avoiding the predations of the bribe-taking police was an alarming and amusing preoccupation.

Increasingly I found my wanderings taking me into the world of the National College of Arts. A couple of my friends were enrolled there, one studying architecture, another graphic design. Others were dating students: painters, printmakers. It was unlike anything I had ever seen. Students of all social classes, and from all parts of Pakistan, attended NCA. The place was a microcosm of Pakistan, but of a creative Pakistan, an alternative to the desiccated Pakistan General Zia had tried to ram down our throats. Here people who prayed five times a day and people who escaped from their hostels late at night to disappear on sexual adventures in the city could coexist. In the studios I saw calligraphy and nudes, work by students with purely formal concerns, and by others for whom art overlapped with politics. I was inspired. I wrote like crazy. I made friends I have kept for life.

Love comes to mind when I think of that time. There was a lot of it going on among the people I hung out with. But I was also falling in love with Pakistan. I have always had a stubborn affection for the land of my birth. When I went abroad for college, I thought I knew it pretty well. But it was my encounters with the denizens of the NCA universe after my return that reminded me that Pakistan is too vast a country to be known, that it is full of surprises, of kinks and twists, of unexpected titillations and empathic connections, of a diversity that can only be described as human. It was exciting and vital and real.

Or rather, they were exciting and vital and realfor my Pakistan had become plural. The art, and artists, I found at NCA ushered me into many more Pakistans: the nascent underground music scenes, the emerging film and television scenes, the scenes of writers like myself, and of course the scenes of other art and other artists, not just in Lahore but in Karachi and Islamabad and elsewhere, and not just in 1993 but in the rest of the nineties, the noughties, and now.

Just a few months ago I was in Amsterdam with two old friends from the Lahore art world. On a warm summer night we checked out some galleries and walked along the canals, whirring bicycles and shrooming teenagers passing us in the darkness. Nothing could have been more different from where we had all been fifteen years earlier. And nothing could have been more similar, either.