On Technology, Stupidity, and the Secret Joys of Bureaucracy

Title
The Utopia of Rules
Subtitle
On Technology, Stupidity, and the Secret Joys of Bureaucracy
Author
David Graeber

A follow up to Debt: The First 5,000 Years presents a tour through ancient and modern history to trace the evolution of bureaucracy while assessing the efficiencies and casualties of its practices in the modern world.

NPR stories about The Utopia of Rules 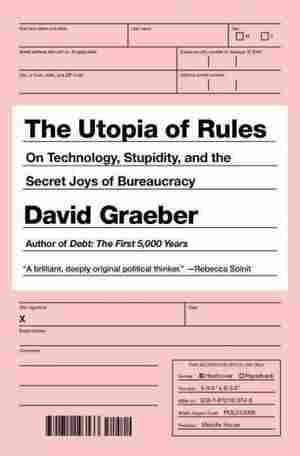 February 26, 2015 • In The Utopia of Rules, David Graeber argues that we live in an "age of total bureaucratization." Reviewer Tomas Hachard says in places the book is almost as serpentine as modern bureaucracy.

Excerpt: The Utopia Of Rules

Nowadays, nobody talks much about bureaucracy. But in the middle of the last century, particularly in the late sixties and early seventies, the word was everywhere. There were sociological tomes with grandiose titles like A General Theory of Bureaucracy, The Politics of Bureaucracy, or even The Bureaucratization of the World, and popular paperback screeds with titles like Parkinson's Law, The Peter Principle, or Bureaucrats: How to Annoy Them. There were Kafkaesque novels, and satirical films. Everyone seemed to feel that the foibles and absurdities of bureaucratic life and bureaucratic procedures were one of the defining features of modern existence, and as such, eminently worth discussing. But since the seventies, there has been a peculiar falling off.

Consider, for example, the following table, which diagrams how frequently the word "bureaucracy" appears in books written in English over the last century and a half. A subject of only moderate interest until the postwar period, it shoots into prominence starting in the fifties and then, after a pinnacle in 1973, begins a slow but inexorable decline.

Why? Well, one obvious reason is that we've just become accustomed to it. Bureaucracy has become the water in which we swim. Now let's imagine another graph, one that simply documented the average number of hours per year a typical American—or a Briton, or an inhabitant of Thailand—spent filling out forms or otherwise fulfilling purely bureaucratic obligations. (Needless to say, the overwhelming majority of these obligations no longer involve actual, physical paper.) This graph would almost certainly show a line much like the one in the first graph—a slow climb until 1973. But here the two graphs would diverge—rather than falling back, the line would continue to climb; if anything, it would do so more precipitously, tracking how, in the late twentieth century, middle-class citizens spent ever more hours struggling with phone trees and web interfaces, while the less fortunate spent ever more hours of their day trying to jump through the increasingly elaborate hoops required to gain access to dwindling social services.

I imagine such a graph would look something like this:

This is not a graph of hours spent on paperwork, just of how often the word "paperwork" has been used in English-language books. But absent time machines that could allow us to carry out a more direct investigation, this is about as close as we're likely to get.

We no longer like to think about bureaucracy, yet it informs every aspect of our existence. It's as if, as a planetary civilization, we have decided to clap our hands over our ears and start humming whenever the topic comes up. Insofar as we are even willing to discuss it, it's still in the terms popular in the sixties and early seventies. The social movements of the sixties were, on the whole, left-wing in inspiration, but they were also rebellions against bureaucracy, or, to put it more accurately, rebellions against the bureaucratic mindset, against the soul-destroying conformity of the postwar welfare states. In the face of the gray functionaries of both state-capitalist and state-socialist regimes, sixties rebels stood for individual expression and spontaneous conviviality, and against ("rules and regulations, who needs them?") every form of social control.

With the collapse of the old welfare states, all this has come to seem decidedly quaint. As the language of antibureaucratic individualism has been adopted, with increasing ferocity, by the Right, which insists on "market solutions" to every social problem, the mainstream Left has increasingly reduced itself to fighting a kind of pathetic rearguard action, trying to salvage remnants of the old welfare state: it has acquiesced with—often even spearheaded—attempts to make government efforts more "efficient" through the partial privatization of services and the incorporation of ever-more "market principles," "market incentives," and market-based "accountability processes" into the structure of the bureaucracy itself.

The result is a political catastrophe. There's really no other way to put it. What is presented as the "moderate" Left solution to any social problems—and radical left solutions are, almost everywhere now, ruled out tout court—has invariably come to be some nightmare fusion of the worst elements of bureaucracy and the worst elements of capitalism. It's as if someone had consciously tried to create the least appealing possible political position. It is a testimony to the genuine lingering power of leftist ideals that anyone would even consider voting for a party that promoted this sort of thing—because surely, if they do, it's not because they actually think these are good policies, but because these are the only policies anyone who identifies themselves as left-of-center is allowed to set forth.

Is there any wonder, then, that every time there is a social crisis, it is the Right, rather than the Left, which becomes the venue for the expression of popular anger?

The Right, at least, has a critique of bureaucracy. It's not a very good one. But at least it exists. The Left has none. As a result, when those who identify with the Left do have anything negative to say about bureaucracy, they are usually forced to adopt a watered-down version of the right-wing critique.